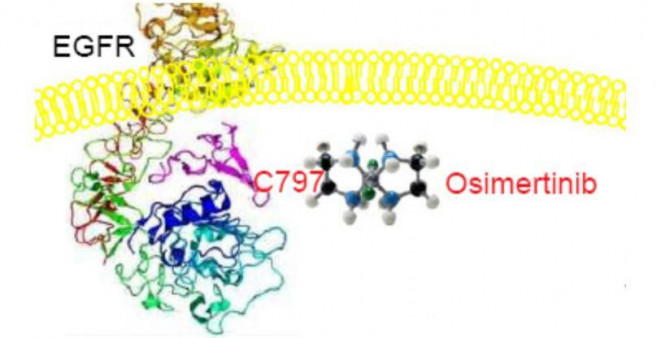 Osimertinib binds to specific mutated forms of EGFR proteins, including one called T790M that is linked to resistance to other EGFR-targeted drugs. OncoTargets and Therapy. September 2016. doi: 10.2147/OTT.S114722. CC BY 3.0

The survival improvement did not come at the cost of safety; the investigators saw no increase in serious side effects.

The first therapies that target mutated forms of the EGFR protein were approved for use in people with non-small cell lung cancer (NSCLC) more than 15 years ago. Updated results from a large clinical trial now show that one of the newest EGFR-targeted drugs, osimertinib (Tagrisso), is more effective than earlier EGFR-targeted therapies in people whose NSCLC tumors have specific alterations in the EGFR gene.

In the trial, dubbed FLAURA, patients with advanced NSCLC who received osimertinib as an initial treatment lived approximately 7 months longer than patients treated with erlotinib (Tarceva) or gefinitib (Iressa). And the survival improvement did not come at the cost of safety; the investigators saw no increase in serious side effects in people treated with osimertinib.

The trial’s overall survival results were initially presented in late September at the European Society for Medical Oncology (ESMO) annual meeting in Barcelona and were published November 21 in the New England Journal of Medicine.

Osimertinib was approved by the Food and Drug Administration (FDA) in 2018 as an initial, or first-line, treatment for people with advanced NSCLC that has specific EGFR mutations. The approval was based on earlier findings from the FLAURA trial showing that the drug improved how long people lived without their cancer getting worse (progression-free survival).

In patients with advanced NSCLC whose tumors have EGFR mutations, Ramalingam said, “osimertinib is now the standard of care for first-line therapy.”

Leora Horn, MD, clinical director of the Thoracic Oncology Program at Vanderbilt-Ingram Cancer Center in Tennessee, agreed. The FLAURA results “tell us that [osimertinib] is definitely the drug you should be using first” for these patients, Horn said.

Non-small cell lung cancer is the most common type of lung cancer. Although EGFR mutations are relatively common in advanced NSCLC, their frequency varies substantially by ethnicity and geographic region, explained Pilar Garrido, MD, PhD, who specializes in treating lung cancer at the Universidad de Alcalá in Spain.

In European and Caucasian populations, the mutations occur in 10% to 15% of patients with advanced NSCLC. But they are present in nearly 40% of patients in some Asian countries, Garrido said during a press briefing on the FLAURA results at the ESMO meeting.

Gefitinib and erlotinib were the first two EGFR-targeted therapies to be approved by FDA to treat lung cancer. Shortly after those approvals, a series of studies showed that the drugs were effective only in patients whose tumors had specific “activating” mutations in the EGFR gene—that is, mutations that can keep the gene constantly turned on, fueling the cancer’s growth.

Osimertinib works against tumors with the same EGFR activating mutations (known as exon 19 deletions and exon 21 L858R) targeted by the other EGFR-targeted drugs. However, it was also designed to specifically target tumor cells with an EGFR mutation known as T790M, which has been shown to cause resistance to the earlier-generation EGFR-targeted therapies.

Importantly, Horn explained, osimertinib also appears to be more effective than other EGFR inhibitors in lung cancer that has spread to the central nervous system (CNS), primarily the brain. “For many patients, the first site of progression can be the CNS,” she said.

The 2018 FDA approval for osimertinib was not its first. It was initially approved in 2015 for use in some people with NSCLC whose cancer returned after receiving one of the other EGFR-targeted therapies. The FLAURA trial was launched to determine whether osimertinib was more effective as an initial treatment than the earlier-generation EGFR inhibitors.

More than 550 patients were enrolled in the trial, which was funded by AstraZeneca, the manufacturer of osimertinib. All patients in the trial had newly diagnosed advanced NSCLC with EGFR-activating mutations and were randomly assigned to receive osimertinib or their physician’s choice of either gefitinib or erlotinib.

Among participants in the osimertinib treatment group, median overall survival was 38.6 months, compared with 31.8 months in the erlotinib/gefitinib group. Three years after initiating treatment, 28% of patients assigned to osimertinib were still taking the drug—meaning that their cancer was still responding to it—compared with approximately 9% of patients in the gefitinib/erlotinib group.

Reflecting the aggressiveness of advanced NSCLC, 30% of patients in the trial whose cancer progressed did not undergo further treatment with another therapy, most often because they died quickly after their cancer progressed.

However, for those in the control group who could receive another treatment after their cancer progressed, nearly half received osimertinib, often referred to as treatment “crossover.”

The median survival of nearly 32 months in the erlotinib/gefitinib group “is among the highest reported” for patients initially treated with either of these drugs, Ramalingam noted, which he attributed to the large number of these patients who went on to receive osimertinib.

Given the high crossover rate, it is particularly noteworthy that osimertinib was able to produce an improvement in overall survival, he said.

Rates of serious side effects were similar between the two treatment groups. More patients treated with osimertinib experienced cardiac issues, including a problem called QT prolongation that can cause heart rhythm issues. Inflammation in the lungs, or pneumonitis, an issue seen in earlier trials with osimertinib, occurred in only a few patients.

A total of 15% of patients in the osimertinib group stopped taking the drug because of side effects, compared with 18% in erlotinib/gefitinib group.

In everyday care, Horn said, patients tolerate osimertinib quite well and are less likely to experience side effects like severe skin rashes and diarrhea commonly seen with the other EGFR-targeted drugs.

The Importance of Molecular Testing

The improved survival seen with osimertinib, combined with its relative safety, “is good news for patients,” Garrido said.

She stressed, however, that clinicians’ use of molecular testing to identify patients who are candidates for targeted therapy is still lacking. Such testing has been hampered in part by what is often referred to as therapeutic nihilism—that is, a belief that the testing won’t produce any benefit for patients.

Although this nihilism has subsided somewhat among clinicians who treat lung cancer, Ramalingam said, it still exists. “Only a subset of patients are getting testing.”

In cases where testing is performed but there is a delay in obtaining the results, clinicians will often begin giving other treatments, Horn said. Increasingly, that treatment is chemotherapy combined with immune checkpoint inhibitors.

Although these immunotherapy drugs can be effective in people with advanced lung cancer, she added, they rarely work in tumors that have EGFR mutations. Checkpoint inhibitors also greatly increase the risk of pneumonitis, she continued, so once they are given, the opportunity to use osimertinib may be lost.

“So if you feel like you have to start therapy, start with chemo and leave out the immunotherapy until you know the patient’s molecular status,” she said.

A critical message for clinicians treating patients with advanced lung cancer, she stressed, is that they need to order molecular tests, “and wait for the result until you start therapy.”