Scientists build on the finding that pancreatic cancer cells use GOT1 to reroute energy and build more cancer cells.

Because cancer cells proliferate at a higher rate than normal cells, they require more energy than normal cells, and thus need to rewire the cell’s energy-producing processes to meet this excessive demand. Think of spoiled Veruca Salt in Charlie and the Chocolate Factory rerouting the chocolate bar supply directly to her father’s factory, where his workers unwrapped them faster than any normal child could, expediting her discovery of a Golden Ticket.

In pancreatic cancer, the energy pathway that gets rerouted is called the malate-aspartate shuttle, which in healthy cells does not produce chocolate bars but a molecule called NADH. NADH is involved the “breaking down” side of metabolism, while its counterpart, NADPH, is involved in the “building up” side. Pancreatic cancer cells hijack the malate-aspartate shuttle to make it produce NADPH as well (see diagram), which is then used to build more cancer cells. 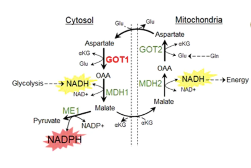 None of this was news to former Damon Runyon Fellow and Dale Frey Scientist Costas Lyssiotis, PhD, and his team at University of Michigan. Having previously discovered this rewiring act, the researchers have been investigating what enzyme is responsible for the maneuver, and how to inhibit it. A recent study revealed the culprit: a metabolic regulator known as GOT1, which is recruited by pancreatic cancer cells to reroute the malate-aspartate shuttle to meet their high energy demands.

Because GOT1 is expendable in healthy cells, but—it turns out—essential to pancreatic cancer cell metabolism, the researchers decided to see what would happen if they knocked out the GOT1 gene. They found that in the event of GOT1 suppression, pancreatic cancer cells can call upon on external sources of antioxidants to keep their metabolic machinery going. But when the team suppressed the GOT1 gene and blocked the cancer cells’ channels of antioxidant import, they succeeded in inducing cancer cell death.

With these findings, Dr. Lyssiotis and his team have both illuminated the means by which pancreatic cancer cells commandeer the cell’s metabolism and highlighted key players for future therapies to target. Given the highly aggressive and lethal nature of pancreatic cancer, this discovery has the gleam of a golden ticket.