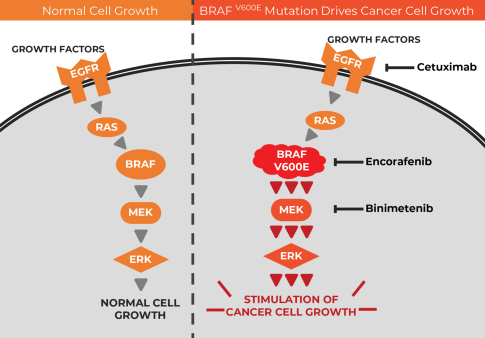 “It’s a great opportunity to help people with colon cancer with this particular mutation. This is a gigantic step in the right direction.”

For some patients with an aggressive form of metastatic colorectal cancer, a treatment regimen that consists of a combination of targeted cancer drugs can improve how long they live without increasing their risk of serious side effects, results from a new clinical trial show.

Results from the trial were presented at the European Society for Medical Oncology (ESMO) Congress 2019 in Barcelona and simultaneously published in the New England Journal of Medicine (NEJM) on September 30. The trial was funded by Array BioPharma, which manufactures encorafenib and binimetinib.

“This study builds on a decade of research into the tumor biology of BRAF-mutated colorectal cancer and reflects a rational combination to address the vulnerabilities unique to this tumor,” said the study’s lead investigator, Scott Kopetz, MD, PhD, of the University of Texas MD Anderson Cancer Center, in a news release. “We are encouraged to see a meaningful improvement in outcomes with this new regimen.”

The BRAF protein is part of a communication route, or signaling pathway, in cells that is necessary for their growth and survival. In many cancer types, the V600E mutation in the BRAF gene causes the protein to be overly active, leading to uncontrolled cell growth and driving the development of cancer.

Although drugs that inhibit BRAF have been shown to be effective therapies against BRAF V600E-mutated melanoma and non-small cell lung cancer, “BRAF inhibitors alone have limited activity in BRAF V600E-mutated colorectal cancer,” the authors wrote in NEJM.

The challenge in targeting this pathway in colorectal cancer, they explained, is something called feedback activation—that is, when BRAF activity is inhibited, other parts of the pathway can compensate by increasing their activity, thereby overcoming the inhibition.

“Many preclinical studies have shown that this feedback may be overcome by targeting multiple nodes in this pathway,” said study investigator Josep Tabernero, MD, PhD, of the Medical Oncology Department of Vall d’Hebron University Hospital in Barcelona, Spain, during his presentation of the findings at the ESMO Meeting.

The BEACON CRC trial involved 665 patients with BRAF V600E-mutated metastatic colorectal cancer whose disease had progressed after at least one previous line of treatment. The participants were randomly assigned to one of three treatment regimens: triplet therapy with encorafenib, cetuximab, and binimetinib; a doublet therapy with encorafenib and cetuximab; or a control treatment consisting of cetuximab and the physician’s choice of one of two standard chemotherapy treatments: irinotecan or the chemotherapy cocktail called FOLFIRI (folinic acid, fluorouracil, and irinotecan).

Kopetz noted that the control treatment options chosen for the trial were “aligned with the standards of care for patients with BRAF V600E-mutant metastatic colorectal cancer at [the] time’ the trial was launched in 2016.

More patients who received the triplet regimen had reductions in the size of their tumors (a tumor response) than patients in the control arm: 26% versus 2%. Patients who had received only one prior line of treatment were more likely to have a response, the researchers reported.

Severe side effects occurred in 58% of patients assigned the triplet therapy, 50% of those assigned doublet therapy, and 61% of those in the control group.

However, less than 10% of patients in the triplet and doublet arms stopped all treatment due to side effects, the researchers reported, which allowed the drugs to be administered for longer periods of time than the control (21 and 19 weeks versus 7 weeks) and to maintain a high dose of the drugs.

A New Standard of Care?

“Standard chemotherapy is obviously not particularly useful in this patient population,” said Carmen Allegra, MD, head of Gastrointestinal Cancer Therapeutics in NCI’s Division of Cancer Treatment and Diagnosis. The results of the trial are “a very important step forward in improving outcomes for patients who have BRAF-mutated tumors,” said Allegra, who was not involved in the study.

Although the triplet-regimen has not been approved by FDA to treat BRAF-mutated advanced colorectal cancer, Kopetz noted that it has been added as a second-line treatment option in National Comprehensive Cancer Network guidelines.

“The triplet regimen may have clinically relevant advantages over the doublet, but further follow-up will better define the relative benefits of the two regimens,” Tabernero said.

Still, “there was a cost in toxicity with the triplet,” Allegra said. Side effects such as diarrhea, nausea/vomiting, and constipation were more frequent in patients receiving the triplet therapy than the doublet therapy.

“I think it’s still a bit of an outstanding question whether you need the three drugs or if two drugs are enough,” he continued. “I think the follow-up from this trial will help us to understand that.”

Tabernero noted that although patients receiving the triplet therapy were slightly more likely to experience severe side effects than those who received the doublet therapy, they had fewer BRAF inhibitor-related side effects, such as skin warts, joint pain, and muscle aches.

A next step, Allegra said, is to test the combination as an initial, or first-line, treatment in patients newly diagnosed with advanced colorectal cancer. But, he cautioned, “before I were to go that direction, I would want to be very sure about the value of three drugs versus two.”

In fact, there is already an ongoing phase 2 study, ANCHOR-CRC, to test the triplet therapy as initial therapy for patients with metastatic BRAF V600E-mutant colorectal cancer.

“The bottom line is that this is a terrific study, and it’s a great opportunity to help people with colon cancer who have this particular mutation, who tend to have very, very poor prognoses,” Allegra concluded. “This is a gigantic step in the right direction.”