Things have evolved pretty quickly. First, the non-existent pain in my cancerous rib went from zero to 60 in the middle of a game of golf.

I made it through the game, but pain has been a problem for the past week. I activated the referral that I delayed two months ago for radiation. The radiologist told me that the T-4 vertebrae is also involved, and apparently the cancer is pushing on a nerve. I’m now on steroids to shrink the swelling to take pressure off the nerve, and hoping it kicks in soon. I can’t tilt my head to look down at my phone or read a magazine, or bend over to reach into a shelf, and I can’t do a thing to help around the house.

This is bringing flashbacks to both Genevieve and me of when I was in chemo (both times) and she had to do everything. I’m appreciating just how much work is involved now that she has to do everything again, and she is appreciating how much of the work I’ve taken on around the house since I semi-retired last year. We each found a little gratitude. But that’s enough of this lesson, thank you. We’d both rather go back to our normal give and take as soon as possible.

I had my pre-radiation appointment, which is called a “simulation.” They had me lie on a bean bag on the CT table, then vacuumed the air out of the bean bag so that it retains my body shape. They set it aside for me, so that every time I come in I will lie down and be in almost exactly the same position. After they scanned me, the tech gave me five tiny tattoos. Along with the two from my first time having radiation eight years ago, I now have seven tats. Does that qualify me to be a Millennial, or is it just proof I’m from Oregon? There is one on each side of my rib cage, and three down my chest. They will use these to line up the lasers, so that when they zap me it will be in exactly the right spot each time. We’re hoping to hit close enough to the spine to kill the pain, but since a vertebrae is involved, and the spinal chord is in the middle of the vertebrae, there is a “less than one percent chance” of neurological damage. The radiologist considered that insignificant. Us, not so much. But the alternative of waiting until a new treatment kicks in and hopefully killing off the cancer in the right spot is even less desirable. 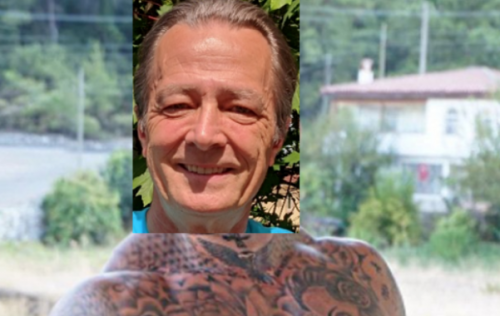 So far, this has not been as entertaining - or embarrassing - as when I had radiation to my hips. Click HERE to read that story. Meanwhile, between bulging ‘roid-fueled muscles and the tattoos, this cancer is apparently intent on turning me into a badass.

It took daily MyChart messages of increasing forcefulness for a week just to get the biopsies ordered, but yesterday (finally!) I had both the tissue and the liquid biopsies. Since the lymph nodes are close to the surface, they were able to guide the needle with ultrasound in real time rather than CT-guided. The lymph nodes were between my carotid artery and jugular vein. I tried to get Genevieve to take pictures, but once they had a needle near my neck she was looking the other way. I felt fortunate that I had to turn my neck toward the video screen, so I got to watch the whole procedure close-up. The radiologist was surprised I looked. Why would I not want to watch? It was fascinating, and gave me a lot of reassurance that they took good samples. Not only that, but this is one of those ultra-intense experiences in life. Why would I not want to be fully present and aware? I’m making the most of this.

Here’s as much as Genevieve would capture in a picture: 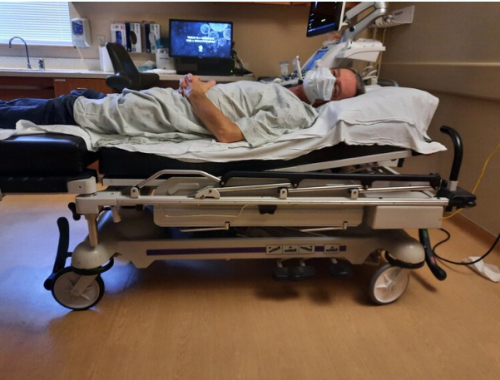 
Once that was done, we went to the outpatient lab to get the liquid biopsy done. One of the perks of doing them in the same day was that the locations were a tram ride apart. You’ve got to stop and smell the roses along the way, right? Living life to the fullest! This was our view: 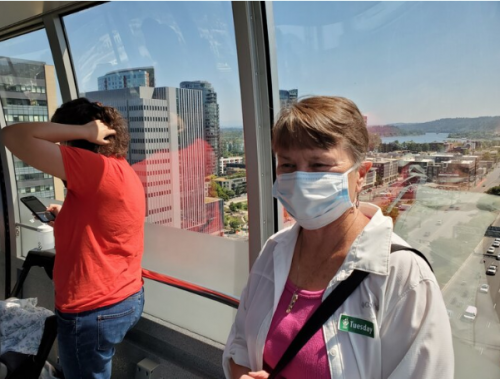 
Now we’re at the point where the rubber meets the road. We should get liquid biopsy results back in about a week. Tissue samples may take 2-3 weeks. If you were thinking of sending thoughts and/or prayers our way, this would be a very good time. The outcome we are hoping for is a treatable mutation. Ideally one with a treatment that has already been approved. If not, we’re definitely open to a clinical trial.

This post originally appeared on Dann’s Cancer Chronicles on July 15 2021. It is republished with permission.