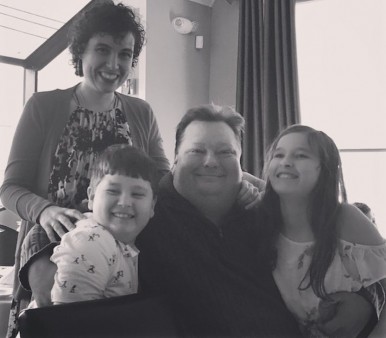 Us at Easter. Family is everything.

I realize that each day that passes, I am further and further away from my diagnosis but I also realize that it has only been almost 17 months since I was told, “You have cancer.” That is really not a long time but in that time, I have accomplished a lot. I have also failed at a lot and moderately skimmed by on a ton.

Here is my status, for my own mental health and also to remind myself of what is important and how. In these (almost) 17 months, I learned to let go and NOT panic as much as possible. When I was diagnosed, I wanted to immediately get the cancer out, I wanted to know 100 percent whether or not I would survive and I wanted to be called a “survivor” immediately… I also was sad, depressed and most of all ASHAMED. I could not believe it had happened to me — I could not wrap my head around it nor could I share it so I kept it all stuffed inside.

I also had to learn to embrace a body with only 1 breast — which was easier than I thought it would be but still not exactly “easy.” I then had to move into chemotherapy and figure out how to survive during it. I had help though and shared my tips I learned by my sherpa here.

After chemo (during which I worked full time and then lost my job the day after my last chemo) I gave myself just 3 weeks until I started radiation. At my last chemo, though, I got my first Lupron shot and also got my script for the hormone suppression pill Anastrazole. Radiation was 33+ rounds and during it, I had a lot to think about as my oncologist thought I should sign up for the Pallas clinical trial. I was unsure of whether or not to sign up so I focused on taking my hormone pill and getting the kids to school and myself to radiation every day.

I continued radiation until July, at which time I had begun blogging — anonymously — here. Sharing my story felt right, it gave me the outlet and as someone who is a writer, it was a pleasure to do and after a few weeks, I decided to no longer hide behind a fake name and to limit those who knew my illness and went live with a big video and sharing MY story, warts and all here on this blog.

It was not long before I began to share about #careeraftercancer and tie in some content around job hunts and also about being a MOM with cancer. In early August, we went on a big trip to Disney (work for parents lol). Also in August, I signed up for the clinical trial and got the drug. Being on a stage 4 drug to see if it could help “early stagers” means that no matter what, my body is not yet back to “normal” — my blood counts are low and there are other effects of this trial plus the Lupron shot plus the hormone suppression pill.

Then, it was September and my dad had to get emergency heart surgery, which meant that I had to step up and do what I could to help him. I did not do as much as one sibling but I was the force behind the scenes and on the scene, too, when my dad would not wake up and I had to fight and be in the doctors and nurses faces to figure out what was going on.

Then, when he was released he came to stay at my house, which meant I was taking care of him — bringing him to doctors, helping him adjust to his new reality and more. It was tough as I had just completed treatments in July and here it was October and I had my dad staying with me and was helping him get better.

During this time, I met with the alternative medicine doctor at Sloan and learned that I needed to lose weight. I began a big fitness and dietary change and eventually dropped down to my high school weight. I also made plans and went away without my kids and also learned to be Lisa and not just “mom.”

Before I knew it, I wrote and self-published the children’s book and began to promote it to give it away for free. I launched more content and wrote for other websites all about my story and also signed up to be a model for Behind the Scars and to be a Goddess and also had personal photos done with my family.

​Throughout this time, I worked hard to find work or to get organized to manage my budget and get things straight. I continue to do that but without the stress — as I have to realize and recognize that the past (almost) 17 months has been insanely busy.

In writing this down, I guess I have to admit that it does make sense that I would be tired. I have done a lot and I continue to push myself within kinder limits to enjoy life, to be present in the moment more and to forgo worry and fear as much as humanly possible.

​This is what I do in the time between…