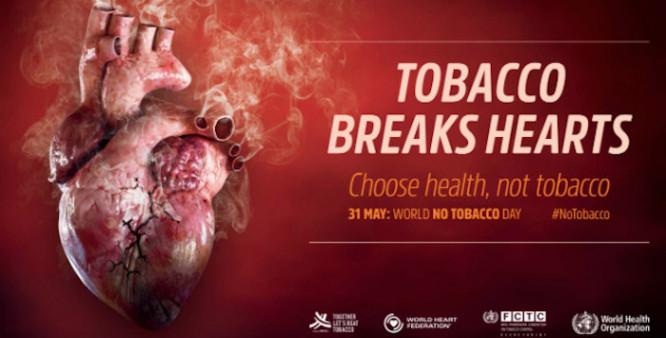 When a person quits smoking, among the most immediate effects are a drop in heart rate, blood pressure and carbon monoxide levels in the blood, all of which are important indicators for heart health. Yet despite broad public awareness of the connection between smoking and cancer, less attention has been given to the cardiovascular risks of smoking, including heart attack and stroke.

This year World No Tobacco Day highlights the impact of tobacco use on heart disease under the banner “Tobacco Breaks Hearts.” There are many reasons to focus on heart health. More people die from cardiovascular diseases (CVDs) worldwide than from any other cause, and tobacco use is responsible for about 10 percent of these deaths.

Moreover, the benefits of smoking cessation and tobacco control policies for heart health can be seen almost immediately. While cancer risk decreases steadily but slowly after quitting smoking, the risks for heart attack and stroke decline much more rapidly. And evidence from many countries, including the U.S., demonstrates that implementation of comprehensive smoke-free laws reduces hospitalizations for acute coronary events. In fact, the majority of deaths caused by secondhand smoke are from heart disease and stroke, deaths which can be prevented by policies that protect non-smokers.

Yet a 2012 report from the International Tobacco Control Policy Evaluation Project, a multi-country study partially funded in part by the National Cancer Institute, demonstrates that awareness of the relationship between cigarette smoking and heart disease remains relatively low. For example, in China most smokers are aware that smoking causes lung cancer, but less than half are aware that it causes heart disease. A similar pattern can be seen across many countries.

Today the majority of tobacco users (over 80 percent), and the majority of deaths from cardiovascular disease (80 percent), are in low- and middle-income countries. Moreover, within countries, tobacco use tends to be highest among the lower income segments of the population. This situation makes for growing disparities in tobacco-related health outcomes, with the burden falling increasingly on the most vulnerable populations. A recent NCI monograph, A Socioecological Approach to Addressing Tobacco-Related Health Disparities, provides further insight into the mechanisms behind and potential interventions to address tobacco-related health disparities.

Much progress has been made in tobacco control since the first World No Tobacco Day in 1987. Yet there is more work to be done to continue raising awareness about the harms of tobacco use and the benefits of going tobacco-free, especially in countries where the burden is greatest.

We invite you to explore NCI’s online resources for tobacco control research and tobacco use prevention and cessation.

This post was originally published on May 24, 2018, by the National Cancer Institute. It is republished with permission.