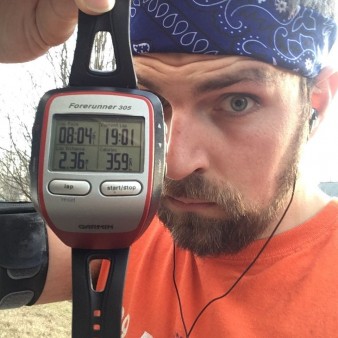 When it’s above 65 in the middle of January, you get your butt outside and get in some miles. What a contrast from last year... Stairs were a beast then!

Although it seems like ages ago, today marks 12 months (also known as one year) since I rang the bell and completed my chemotherapy. This time last year, I was apprehensive—had the chemo worked? Would I be cancer free now? When would the side effects end? Would my long, luscious locks grow back?

Spoiler alert: to answer all of those questions, yes, yes, in a few months, and yes.

I wrote “progress updates” at two months and five months (meant to be six, but I counted wrong) post-chemo. When preparing for today’s update, I reread those posts. I was struck how different in tone they were. While I was still experiencing a number of physical side effects two months after chemo, I was seemingly okay mentally. The inverse was true for the five month update—very few physical side effects but a lot of emotional turmoil.

Today, I am revisiting those “progress updates” for a twelve months later post. Physically, I’m 99.999 percent back to normal. I have not had any feelings of nausea since the perfect storm of the all-you-can-eat pizza buffet and imbibing on the night of my the bachelor party, but that’s not related to chemo in any way. My hair has completely grown back (but I’m contemplating a new style now). My fitness levels are through the roof—I recently ran a mile in less than seven minutes and thirty seconds, my bench press max is higher than it was in college, and I’ve lost over thirty pounds (the ten pounds I gained on chemo, the five on the honeymoon, and then some), making me the lightest since moving to Virginia in 2013. I know these sound like a lot of humblebrags (isn’t that the whole point of social media?), but it’s also a way to show my physical progress.

The only real remnant of a physical side effect (accounting for that 0.001 percent) is my continued disdain for plain water. This first stemmed from the metallic taste in my mouth during chemo and continued through recovery. I honestly have no idea if that’s even related to a lingering side effect, but I only take my water infused with lemon or cucumber…and shaken, not stirred.

On the mental and emotional side of things, I’m somewhere in between the two and five month updates. One of my biggest frustrations during chemo and beyond was my inability to read a book. I ended up completing 55 books in 2017, three fewer than 2016. Honestly, I was disappointed in myself that I didn’t match or surpass the previous year, but I also had to take into consideration that I only read for ten and a half months in 2017 versus nearly all year in 2016.

Now, I can read books with ease, finishing over 10 books since the start of 2018 (with a goal of 60 total this year). It seems like a random achievement to strive for, but it’s an important one to me to prove to myself that my brain is fully functioning again.

Overall, chemo brain seems to have less power over me, as I have significantly less difficulty with memory and word retrieval now. At times, I do have some issues remembering what I was trying to do a few minutes prior. Usually, I just retrace my steps (sometimes literally), and that triggers my intention. Google Keep (I find it weirdly awesome to check things off my to-do list) and Alexa still keep me straight on a regular basis.

Emotionally, I’m doing better than I was doing at five months (that was quite a dark place in hindsight), but I’m not quite to the level of the positive and chipper attitude I had two months after chemo. As I’ve shared, I started on antidepressants after my last CT scan, and I’ve been on them for about a month now. They say it takes about six weeks for them to fully take effect.

My doctor recently upped my dose to 30 milligrams a day instead of 20, since I was not feeling any different after four weeks. Since beginning the increased dose, I am noticing that my overall mood is improving. I am hoping that this is due to finding the right pill and not just a placebo effect. As time goes on, I will share another post focusing more on my experiences with these pills.

Overall, I’d say that twelve months later, I feel physically great, and my emotions are on the upswing for now. I’m sure the physical side of things will maintain its strength (pun fully intended), while the emotional side will be up and down as I travel through life. I wrote a post in October, to commemorate the first anniversary of my orchiectomy, about how my goals, perspective, and focus have changed since beginning this journey, and it still holds true. I’m looking forward to next January’s edition of this post and seeing where life has taken me by then.

And for the record…my left testicle STILL has not grown back.

But I still have hope, even if that “definitely won’t happen naturally and we’ve asked you repeatedly to please stop calling us, Mr. Birckbichler.”