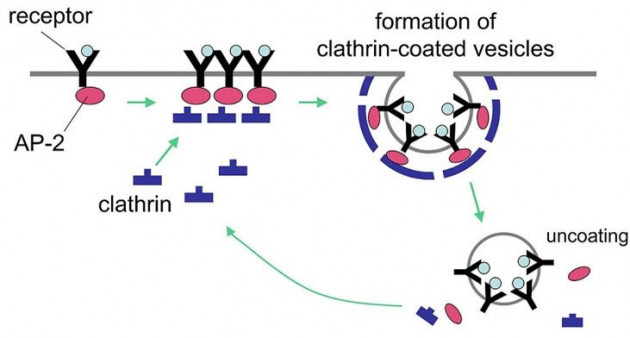 Unlocking the Mystery of the Cell’s Gates

A discovery in how cells absorb substances provides insights into certain cancers and may be applied to therapeutic drugs.

Cells absorb hormones, proteins, and other molecules from their environment through a process called endocytosis. In this process, the molecule being absorbed—the “cargo”—binds to a receptor on the surface of the cell membrane, recruiting a protein called clathrin to the inside of the cell membrane. The membrane then pinches inward to form a clathrin-coated vesicle with the cargo protected inside. Endocytosis is mediated by a protein complex called AP2, which links the cargo-bound receptors to the clathrin coat (see the illustration above).

The functionality of AP2 depends on its shape. When “closed,” it can only bind to the cell membrane; when “open,” it can bind to cargo-bound receptors and clathrin proteins. But how exactly it makes this conformational change from “closed” to “open” has long been unclear.

Now, research by former Damon Runyon Fellow Richard W. Baker, PhD, and colleagues at the University of North Carolina at Chapel Hill and Cornell University has uncovered an overlooked step in between these stages. Before it can open, AP2 is “primed” by molecules called muniscins, which recruit AP2 to the membrane and rearrange it to expose cargo-specific binding pockets. Once AP2 binds its cargo, the muniscin falls away and AP2 shifts into the “open” conformation seen in clathrin-coated vesicles. In this way, muniscin functions like the assistant who sidles up to the CEO at an event, whispers the name of an oncoming colleague, and falls away silently, leaving their boss primed to converse.

The team’s discovery indicates that, contrary to the belief that endocytosis “runs on autopilot,” substances actually gain entry to the cell through a tightly controlled process. This provides insight into cancers that are driven by the absorption of mutant proteins or viruses. It also has implications for the delivery of therapeutic molecules, which must enter the cell through the same gatekeeping mechanism. Therapeutic approaches that take the “priming” of AP2 into account, either by enhancing or inhibiting it, might change the rules for entry, making cells more cancer-exclusive.

This research was published in Nature Structural & Molecular Biology.

This post was originally published June 9, 2022, by Damon Runyon Cancer Research Foundation. It is republished with permission.