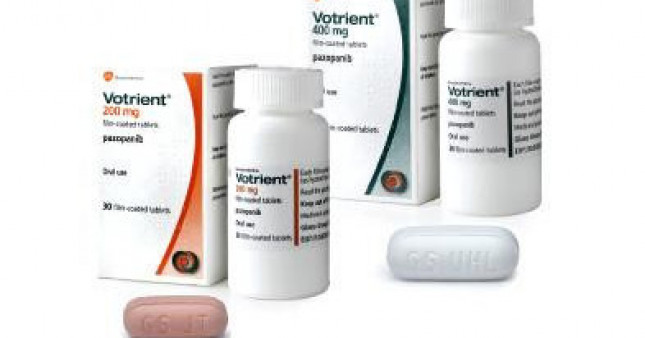 Adding the targeted drug to chemo and radiation treatment is safe and increases the chance that most of the tumor will die before surgery.

For most people with advanced soft tissue sarcoma, standard treatment includes radiation therapy and possibly chemotherapy before surgery to remove the tumor. The goal is to kill as much of the tumor as possible before operating, which can help the surgeon get all or most of the tumor out safely and kill cancer cells that may have escaped from the original tumor.

Now, early results of a clinical trial show that for children and adults with advanced soft tissue sarcoma, adding the targeted drug pazopanib (Votrient) to chemotherapy and radiation treatment is safe and increases the chances that most of the tumor will be dead before surgery.

Having a mostly dead tumor before surgery also is thought—but not proven—to improve how well patients do in the long term, said a lead investigator on the trial, Aaron Weiss, DO, of Maine Medical Center in Portland, Maine.

The new findings, published July 20 in The Lancet Oncology, “are very promising” though still preliminary, said Christine Heske, MD, of the Pediatric Oncology Branch in NCI’s Center for Cancer Research, who was not involved with the study. “It will be critical to determine whether these early tumor responses translate to survival benefits for these patients.”

“This is an important study because it is trying to change the standard of care for people with advanced soft tissue sarcoma,” said Breelyn Wilky, MD, a medical oncologist at the University of Colorado Cancer Center. Wilky was an investigator for the trial in her previous position, at the University of Miami.

The NCI-funded clinical trial also was notable because it was designed to include children, adolescents, and adults, which allowed researchers to study a larger group of people than is typical for clinical trials of these rare cancers, Wilky and Heske said.

This collaborative approach “could be a model for studying soft tissue sarcoma and other rare cancers” that affect people across a wide age range, including adolescents and young adults, Heske said.

Surgery to Remove Larger Tumors Can Be Risky

Soft tissue sarcoma is a group of about 100 different cancer types that form in the soft tissues of the body, including muscle, tendons, lymph vessels, and tissue around joints. The tumors can be found anywhere in the body but often form in the arms, legs, chest, and abdomen.

These cancers account for fewer than 1% of all new cancer cases diagnosed each year.

Surgery to remove large, advanced soft tissue sarcomas often is more difficult than surgery to remove a small tumor and can be risky based on the tumor’s location—for example, if the tumor is close to important structures like blood vessels or nerves, Wilky said.

Normally, surgeons will aim to remove a tumor completely, along with 1–2 centimeters of normal tissue around it, “to make sure they’ve got everything,” she continued. “But if you can’t [do that safely], the next best thing is to make sure that the edge of the tumor that you leave behind is dead… and hopefully won’t be able to spread or cause the cancer to come back.”

The new study involved patients with tumors that were large and more aggressive and initially not good candidates for surgery; in some cases, the cancer had spread, or metastasized, from the site of the original tumor.

Pazopanib, which is taken as a pill, is FDA-approved for use by itself in adults with soft tissue sarcoma who have received chemotherapy. “But at the time this study was developed, we didn’t know whether it was safe to combine pazopanib with the more traditional therapy used” for either adults or children with these cancers, Weiss said.

Participants underwent surgery 13 weeks after treatment began. A pathologist then examined the removed tumor tissue under a microscope to determine the percentage of tumor cells that were dead after treatment, which is known as the pathological response.

The trial was designed to compare the percentage of patients in each treatment group that had a pathological near complete response, which was defined as at least 90% of the tumor being dead at the time of surgery.

Among the 42 patients remaining in the study at the time results were analyzed, 14 of 24 (58%) in the pazopanib group versus 4 of 18 (22%) in the control group had a pathological near complete response.

One of the most exciting findings of the study, Wilky said, “is that adding pazopanib to standard chemotherapy was feasible from a safety and side-effect perspective.”

Serious side effects seen most commonly included low white blood cell counts, a fever requiring hospitalization, and wound complications. These side effects occurred more often in patients receiving pazopanib, and 59% of patients in the pazopanib group had a serious side effect related to the drug.

The research team plans to follow the remaining patients to find out whether greater pathological response translates into improved long-term outcomes and expects to have those results in about 4 years.

However, the relatively small number of patients remaining in the study and the fact that the study was not designed to detect whether patients live longer may make it hard to get a clear answer, Weiss said.

Another potential limitation, Heske noted, is that roughly half of all patients in each treatment groups had a single type of soft tissue sarcoma, synovial sarcoma, and it’s not clear if all patients in the trial benefited from pazopanib in the same manner. However, she continued, “if you tried to study some of the other types of soft tissue sarcoma on their own, you’d have no opportunity to do a clinical trial because they’re just so rare.”

One question that remains, which this study did not address, is whether pazopanib would enhance the effects of chemotherapy in types of soft tissue sarcoma not traditionally thought to be responsive to chemotherapy, Heske said.

Another key question, which additional work planned as part of the study may help answer, is that “we still don’t really understand how pazopanib works” in treating soft tissue sarcoma, Wilky said.

Although pazopanib is considered a targeted therapy, the drug blocks the growth of new blood vessels that feed tumors, affects the way the immune system works, and affects the way cancer cells talk to each other, she continued.

“And we’ve never delved in and asked, ‘What is the important target of pazopanib? What do you need to have in your sarcoma for this drug to be effective?’” she said. “If we had a better understanding, we would be able to use it in a much more precise way.”