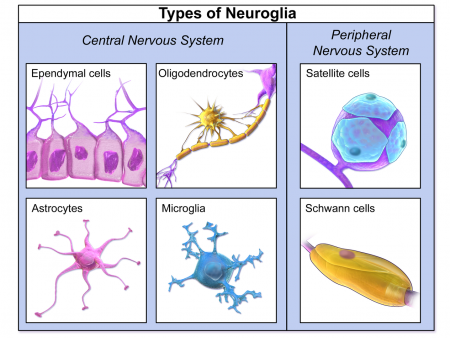 What Is GBM, Anyway? Part II

GBM is called “the terminator” for its pervasiveness, its resistance to therapeutic intervention, its unknown origins, and so forth.

In Part I of this post we followed my journey toward GBM diagnosis, I briefly discussed Standard of Care (SOC), and I teased the post you are presently reading by connecting the etymology of glioblastoma to the Greek “glia,” meaning “glue” to indicate the affected cell types for malignant glioma—namely, non-neuronal brain cells such as oligodendrocytes and astrocytes. These glia comprise 90% of the brain. Together, the neurons and glia are denoted by the word parenchyma—gold-star word alert, meaning the functional bulk of tissue rather than structural or connective tissue.

It is clear that together we are wading into waters ankle-deep with medical terminology, but I hope you’ll stay with me. On the other side we will have learned something about our brains and bodies.

Understanding glia contributes to our evolving understanding of GBM. At least one ideal outcome to better understanding GBM is that we may better understand how to effectively fight, and ultimately, to cure, the disease. Of course many of you are reading along because you support me, and are interested in my fight, and I value your support. Part of being a good partner with you, is that I restrain from offering hyper-technical descriptions of cancer and associated treatment. I am not a medical professional, and I am not here to provide an alternative to Wikipedia, which would be both superfluous and not nearly as comprehensive. At any rate, I plan to stick to the narrative, for the most part. I’ll introduce technical knowledge into the discussion when I think it is warranted by its significance to understand the journey we are walking. Firming up our grasp on glia is one of these moments.

Glia play an important role in protecting, insulating, and facilitating neuronal connections, but that sells our glia short. Astrocytes play a central role in creativity and imagination. More striking, Albert Einstein’s brain, rather anatomically unremarkable in many respects, displays a higher concentration of astrocytes, densely populated in the areas of the brain involved in spatial reasoning and mathematics. Do we have astrocytes to thank for the upheaval of the Newton’s classical mechanics and ushering in of the age of relativity?

Oligodendrocytes, also glia cells, insulate axons to protect nerve fibers which carry electrical impulses away from the neuronal body and communicate with other axons or muscle fibers at connection points called synapses. So much to learn about these fascinating cells that play an important role in our thinking, perceiving, abstracting, moving, and feeling our way through the world. For each of these glia types discussed there is the risk of cancer: astrocytoma, oligodendroglioma, glioblastoma, and so on. These cancer types are graded according to World Health Organization (WHO) criteria, with a higher grade indicating cells exhibiting more rapid growth and greater divergence from normal cells. Glioblastoma multiforme (GBM) is a grade IV glioma/astrocytoma.

The brain is 90% glial cells. In a grade IV glioma, the resistance to therapeutic intervention is the following. Mutated cells easily track through the white matter of the brain, surrounding neurons, and invading vital brain functions. GBM, through cell division, branches, spreads fingers of abnormal cell growth (“Abby someone. Abby Normal. I’m almost certain that was the name.”) A malignant glioma can never be 100% resected because these branches, or fingers, even if visible on an MRI scan, are so invaded into healthy brain, a complete resection would sacrifice vital functions. The multiforme of “Glioblastoma Multiforme” indicates gross malformation of tissues, topographically, in other words, the structures of the central nervous system (CNS), microscopic malformation at the cellular level, as just discussed, and genetic malformation resulting in aberrations in the signal pathways that trigger cell division of mutated glia. These signal pathways, involving molecular signals, which latch onto receptors in cells to initiate activities such as metabolism and mitosis, likely deserves its own discussion—let’s table that for now.

GBM, perhaps unhelpfully, but at least sardonically (#smh #cancersucks) is called “the terminator” just for these reasons: its pervasiveness, its resistance to therapeutic intervention, its unknown origins, and so forth. Consider the new treatment options showing success at our best cancer institutes: Optune, an electric-field emitting “cap” or “hat” that a patient wears at least 18 hours each day, alternates an electric field, pervading the brain, thousands of times each second. The electric field interferes with cellular mitosis (division). When glia attempt division, the electric field prevents proper alignment of the involved protein-chains and results in cell death. Optune is shown to delay tumor growth and extend overall survival rates when used instead of chemotherapy alone. This is the recent medical intervention I have employed in treatment of my own GBM.

CONCLUSION: We set out to answer, What is GBM? Along the way we learned that GBM is an aggressive cancer affecting parenchymal cells of the brain responsible for creative thinking, reasoning, nerve fiber protection, and other neuronal-supportive tasks. These cells comprise the bulk of brain tissue; hence, GBM spreads easily to surround neurons and vital brain structures. Innovative new treatments focus on disrupting cell division.

Putting a Target on Breast Cancer That Spreads to the Brain