In honor of the recent Veterans Day, here’s the USS Cochrane DDG 21, my first ship in the U.S. Navy Daniel Zeller

Plus: creating a “life calendar” graphic to illustrate how many weeks I may have left—and keeping a healthy outlook on death. [VIDEO]

Woo-hoo! I’m still alive and kicking twelve years after my diagnosis with this annoyingly insidious disease. I’ll take that as a definite win.

But regular readers already know that, in the last year, the path has gotten a little bumpier with the treatments needed to keep me around another twelve years (or more, hopefully). I guess that’s all part of the package deal. It doesn’t mean we have to like it, but it’s part of the cancer experience.

Also part of the cancer experience is thinking about one’s own mortality. It’s not something to dwell on, but it is something that I’m certain most cancer patients consider at some point.

Several years ago, I stumbled across Tim Urban’s TEDx Talk about procrastination (video below; you can also watch it on YouTube).

It was a fun, engaging talk and, at the end, he introduced the concept of a “life calendar.” In his example, he showed a table of empty boxes with each box representing one week of a ninety-year life. Of course, the nerd in me had to take that one step further.

At the end of her life, my mom had a really healthy outlook on death and dying, to the point it surprised her hospice nurses. She made it okay to talk about what most would view as a rather morbid or taboo topic, and I guess I’m following in her suit. This exercise is really meant to be a more lighthearted approach to get us to think about the time we have remaining and how we best want to use it. Priorities.

Our family doesn’t have a history of longevity, so my getting to 90 years is against the odds even without cancer in the mix. The analyst in me wanted to get a more realistic understanding of my possible longevity, so I added in how long my parents and grandparents lived. In my hourglass below:

My father outlived his mother by exactly 50 days, both dying of cardiac issues at about 69.5 and 69.7 years of age. If I follow in their footsteps, the first / upper green square represents me making it to 69.6 years—the average between them. The second / lower green square represents my longevity based on the average of all six of them, or 72.5 years (more specifically, 19 July 2030). 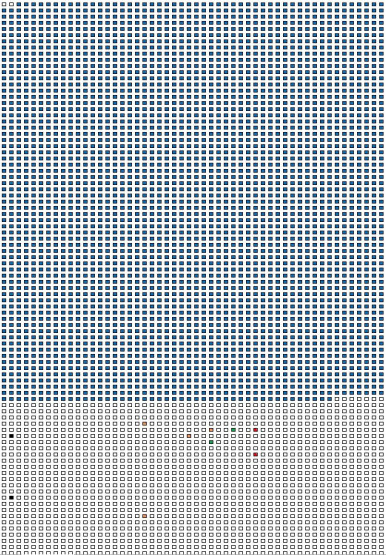 Am I obsessed with death? No, I’m probably more obsessed with spreadsheets and analysis. (Perhaps I should have been an actuary.)

For me, this exercise has had value. Sure, all of us of a certain “mature” age recognize that more of our life is behind us in the rear-view mirror than is ahead of us through the windshield, and putting it into a visual format like this really makes you sit up and take notice. It makes you ask, “What am I going to do with those remaining boxes?”

Of course, side effects from treatments for advancing disease or other maladies associated with growing older can impact us, too. Those may begin to take away quality of life, filling some of those boxes from the bottom up, putting us in a vise being squeezed between time and future abilities. While they may not do us in, they can definitely hinder our ability to live a full life.

Of course, none of us have a crystal ball and know when any of this will happen. It could be tomorrow, or it could be thirty years from now, so that leaves today. (Yes, I know that’s as cliché as hell, but it’s true.)

So, if you’ll excuse me, I’m going to close my hourglass spreadsheet and open a few spreadsheets to plan some bucket list trips. Time’s a-wasting…

I met with the radiation oncologist Thursday morning, but I’ll put those details in another post over the weekend.

This post originally appeared November 11, 2022, on Dan’s Journey Through Prostate Cancer. It is republished with permission.