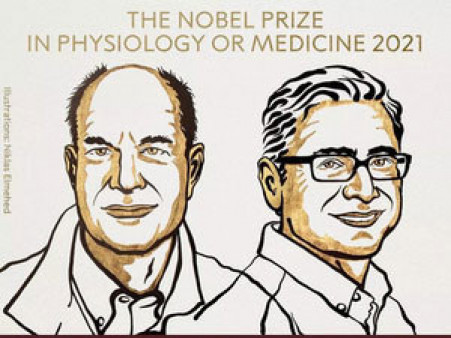 The Work of Generations: How a Nobel Prize Is Won

A look at the scientists behind David Julius’s Nobel Prize for discoveries regarding the proteins that help us sense temperature and pain.

Just before dawn on Monday, October 4, 2021, David Julius, PhD, a longtime Damon Runyon mentor and former Fellowship Award Committee member, and Ardem Patapoutian, PhD, a former Damon Runyon awardee, received news that they had won the Nobel Prize for Physiology or Medicine. The award recognized the two scientists’ independent “discoveries of receptors for temperature and touch.” Ardem and his team at Scripps Research discovered the Piezo channel proteins, essential for our sense of touch. For David, the Nobel culminated over three decades of research at the University of California, San Francisco, on the proteins that help us sense temperature and pain.

In the tradition of scientists like Solomon Snyder, who used morphine to identify the brain’s opiate receptor, David used capsaicin, the compound in chili peppers that makes them “burn,” to look for a pain receptor. In 1997, he discovered this holy grail of sensory biology—the TRP channel, known as TRPV1, that detects both pain and harmful heat. In the years since, researchers in the Julius lab have unraveled mysteries surrounding this channel’s shape and function, providing critical insight for the development of pain treatments. For cancer patients, who often experience pain not only as a symptom of their disease but as a side effect of their treatment, these insights hold particular significance.

David arrived to a celebratory atmosphere on the UCSF campus that Monday morning, complete with a garland of chili peppers for him to wear around his neck. Like Ardem, who has credited the “young, enthusiastic, smart scientists, graduate students, and post docs who actually do the work,” David considers the Nobel Prize a collective win. “Everything someone learned in a previous era propelled the next one forward,” David remarked in a recent interview. “It all came together like a little puzzle.”

One Piece at a Time

When former Damon Runyon Fellow Elizabeth Prescott, PhD, joined David’s lab as a graduate student in 1998, this feeling of propulsion was in the air. The TRPV1 channel had just been identified and lab members were giddily designing art for their upcoming Nature cover story. “It was a really exciting time in the lab,” Elizabeth remembers. “There was this sense of insatiable curiosity.” As a PhD student, she benefitted from David’s evident enthusiasm for bench science, his faith in his mentees, and the tight-knit, collaborative atmosphere of the lab. In 2003, she and David published a major finding: the TRPV1 channel is regulated by PIP2, a molecule involved in the inflammatory response to tissue injury. This helps explain why, for example, a warm shower feels painfully hot if your skin is sunburned. It also suggests a solution to the major dilemma of pain treatment—how to ease suffering without removing a person’s (protective) capacity for pain. Drugs that do not fully disable the channel but interfere with modulators like PIP2 could tread this elusive middle ground.

But the development of more nuanced drugs requires a more nuanced understanding of the channel’s three-dimensional shape, “all the nooks and crannies” where a therapeutic molecule might lodge. Fortunately, this piece of the puzzle was provided by former Damon Runyon Fellow Erhu Cao, PhD, who joined the lab as a postdoc in 2008 with a background in structural biology. “David gave us the important questions,” Erhu recalls. “And we had the freedom to figure them out. If we didn’t know how to do it, he encouraged us to find an expert to learn from.” In Erhu’s case, this meant visiting another lab to learn cryo‐electron microscopy, a method of determining the structure of proteins that involves flash-freezing and trapping protein particles. Still avant-garde at the time, the technique gained enormous traction after Erhu and his colleagues described the atomic structure of the TRPV1 channel in 2013. Their discovery paved the way for the development of better pain medications and sparked a “resolution revolution” in the study of large molecules.

Now leading his own lab at the University of Utah, Erhu strives to emulate his mentor. “I try not to put too much emphasis on getting things done quickly—to give my trainees room to fail,” he says. “If you figure out every problem with them, they don’t get to learn how to solve problems.”

David attributes this approach to his own mentors, including molecular biologist (and fellow Nobel laureate) Richard Axel, MD, in whose lab he trained as a postdoctoral fellow. David arrived in 1984 amidst a frenzy of gene cloning, newly possible and considered the key to answering a range of physiological questions. “I don’t know if anyone was working on the same organism, much less organ system,” he recalls of Axel’s lab. David set out to find the serotonin receptor (perhaps inspired, he quips, by the popularity of hallucinogens in Berkeley at that time). Progress was slow; he identified the right gene, in 1988, only after years of false starts. But Axel never lost faith, and from this experience David derived a crucial tenet of his mentorship philosophy. “If you let people be independent and try risky things, you have to stand behind them,” he says. “You can’t be fickle.”

At Damon Runyon, David says, he sees this philosophy in action. “When Fellows have moved or needed other accommodations, Damon Runyon listened. They understand that the goal is to support the scientist and make it possible for them to focus on their work.” He appreciates the Foundation’s broad approach to funding because “cancer, like pain, is a beast with many heads,” and progress is the work not of individuals but generations. David’s current team, including Damon Runyon Fellow Kouki Touhara, PhD, has lately begun exploring mechanisms of visceral pain. Erhu continues to uncover novel protein structures, and Elizabeth is the Chief of Staff at Fred Hutchinson Cancer Research Center. They are all mentors themselves now; time will tell what puzzles their mentees are poised to solve.

This post was originally published June 10, 2022, by Damon Runyon Cancer Research Foundation. It is republished with permission.