Kadcyla is a HER2 inhibitor combined with a chemotherapy drug. It is approved for people with HER2-positive metastatic breast cancer who were previously treated with Herceptin and chemotherapy and for adjuvant (post-surgery) therapy for early breast cancer. 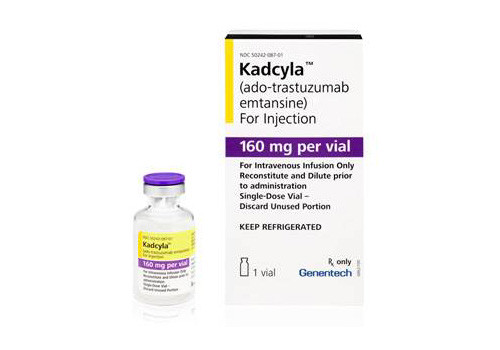 About 20% of breast cancers have a high level of human epidermal growth factor receptor 2 expression. HER2 plays a role in cell division and repair, and blocking these receptors can slow cancer growth. Kadcyla is an antibody-drug conjugate that consists of trastuzumab (Herceptin) plus a drug that directly interferes with cell division. It was approved in 2013.

Studies showed that Kadcyla delayed disease progression and improved survival in patients with locally advanced or metastatic breast cancer who were previously treated with Herceptin and taxane chemotherapy. The Phase III KATHERINE study showed that Kadcyla reduced the risk of cancer recurrence more than Herceptin when used as adjuvant (post-surgery) treatment.

Dosing Info: Kadcyla is administered as an intravenous infusion, usually every three weeks until disease progression or unacceptable side effects occur.

Common side effects include fatigue, nausea, muscle pain, headache and constipation. Kadcyla can cause depletion of platelets (thrombocytopenia), which can lead to easy bleeding. Potential serious side effects may include heart, lung and liver problems, neurotoxicity and infusion reactions. Kadcyla should not be used during pregnancy.