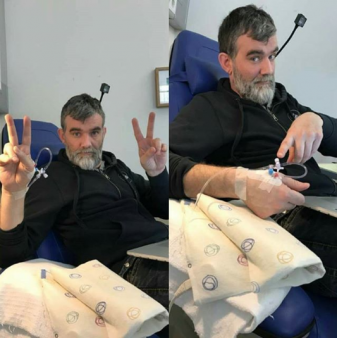 Many young people—and their parents—may remember Stefán Karl Stefánsson as villain Robbie Rotten on the Nickelodeon hit children’s show LazyTown. Stefánsson died Tuesday at age 43 after a two-year battle with bile duct cancer, according to his wife, PEOPLE reports.

Bile duct cancer, or cholangiocarcinoma, is a rare and aggressive cancer that starts in the bile duct. The American Cancer Society defines bile ducts as “a series of thin tubes that go from the liver to the small intestine.” Nearly 8,000 Americans are diagnosed with bile duct cancer annually.

“Per Stefan’s wishes, there will be no funeral,” his wife, Steinunn Thorsteinsdottir, told PEOPLE in a statement. “His earthly remains will be scattered in secrecy in a distant ocean. Stefan’s family wants to express their gratitude for the support and warmth received in recent years, and to express their deepest sympathy to the many friends and fans of Stefan Karl.”

News media, including BBC Newsbeat, began reporting on the Icelandic actor’s condition after Thorsteinsdottir made an announcement via Facebook in June 2017.

“Stefan has bile-duct cancer (cholangiocarcinoma), a rare and little-researched disease,” she wrote. “The disease is now advanced to stage four, and therefore, his life expectancy is unfortunately significantly reduced.”

But Instagram posts from Stefánsson show many of his fans knew of his condition since as early as 2016. He shared several posts throughout his cancer treatment journey, including one in which he revealed he was “all done with chemo for now.”

Stefánsson often expressed gratitude toward his fans for their love and support, including in his final Instagram post on June 25, 2017.

“From the bottom of my heart, I thank you for the support you provide me,” he wrote. “You give me hope and you all move me.”

Thank you for the support.

All done with chemo for now. ???? #allover #happy #happyplantdad

From the bottom of my heart I thank you for the support you provide me. You give me hope and you all move me.