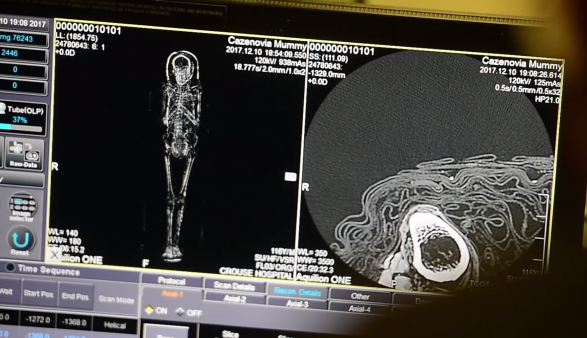 A 2,000-year-old ancient Egyptian mummy was recently diagnosed with cancer after researchers in Syracuse, New York, conducted a next-generation CT scan study of the remains. The find provides a fascinating look just how far back cancer can be traced, Tech Times reports.

Named Hen, the mummy was found inside an Egyptian tomb in the late 1800s and has been on display at the Cazenovia Public Library near Syracuse since 1894. Researchers first examined the remains in 2006 to try to determine the mummy’s cause of death but were unable to make a diagnosis due to technical limitations.

But medical diagnostic tools have advanced so much since then that scientists decided to take another look. After conducting several CT scan studies at Crouse Hospital, they determined that the man died of a rare malignant tumor on his fibula, one of the two bones in the lower leg.

Archaeologists involved in the study noted that the ancient Egyptians likely would not have known of the man’s fatal illness, let alone been able to treat it. However, the remains provide a glimpse into the human history of cancer.

This isn’t the first time that a mummy has been diagnosed with cancer. In 2011, researchers discovered that a 2,250-year-old ancient Egyptian died of prostate cancer. In 2012, archaeologists found a 2,900-year-old mummy of a 20-year-old ancient Egyptian man who died of a rare cancer-like disease and diabetes. And last summer, an expeditionary team in South Africa unearthed a 1.7-million-year-old toe bone thought to contain the oldest documented case of cancer.

Each find suggests that although modern lifestyles have increased the risk of cancer across the world, triggers for the disease have long affected humans. Researchers hope that with more studies, they can trace our history with the disease even further.