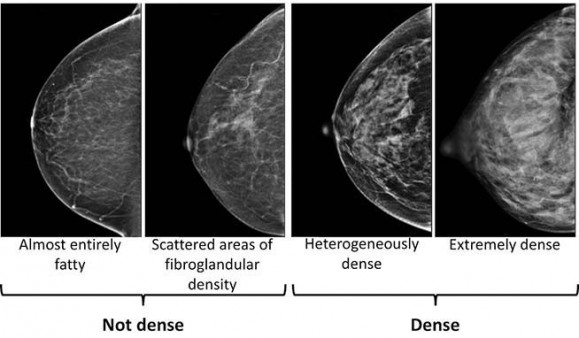 Breasts can be fatty or dense. The left image shows fatty tissue in a breast and the right images show increasing degrees of breast density. Dense tissue, which appears white on mammograms, masks the presence of breast tumors, which also appear white. Courtesy of UW/SCCA Breast Imaging

When it comes to finding the most breast cancers, there’s no question MRI is king.

MRI, or magnetic resonance imaging, is one of the most effective tools around for finding breast tumors, even those growing in dense tissue which is notoriously hard to image. Dense tissue masks cancer on mammograms much like a snowstorm can mask a snowball — or a polar bear. Both appear white.

The problem is MRIs come with a royal price tag, making them far too costly to use as a preliminary screening tool for every woman with dense breasts. That’s nearly half of women in the U.S.

But what about a shorter, more streamlined version of MRI? Could that be a better, more affordable way to screen average-risk women with dense breasts?

Researchers from the large cancer research group ECOG-ACRIN tried to answer that question with a trial, just published in JAMA, that pitted the most sensitive type of mammogram available, digital breast tomosynthesis (otherwise known as DBT or “3D mammography”), against a faster, more targeted version of magnetic resonance imaging dubbed “abbreviated breast MRI,” or AB-MRI. Both types of MRIs use an injected contrast agent to light up the cancer.

The good news? AB-MRI is extremely effective at catching breast cancers. The bad news: nobody knows what to bill for it so there’s no way to tell if it’s more cost-effective than 3D mammography.

“The results are very compelling,” said radiologist Habib Rahbar, MD, the investigator representing Fred Hutchinson Cancer Research Center on the study. “We’ve clearly confirmed that a contrast-based approach to screening has a higher sensitivity to catch breast cancers than a noncontrast-based approach.”

What could this mean for women?

“This will likely be practice-changing,” Rahbar said. “There’s little question in my mind that we’ll see increased use of AB-MRI in response to this study. But before we recommend it for general use, some additional issues like cost need to be worked out.”

Screening smackdown: 3D mammogram vs. abbreviated MRI
The study, conducted at 47 institutions in the U.S. and one in Germany, included nearly 1,500 women, ages 40 to 75, all of whom had dense breast tissue. Participants were randomized first to receive either DBT or AB-MRI. Then they were screened, first with one modality, then the other, at study start (both within a 24-hour period) and again after a year (researchers will do a three-year follow-up).

All told, 17 out of 1,444 women were diagnosed with invasive breast cancer (either ductal or lobular) and six women were found to have DCIS, or ductal carcinoma in situ, sometimes referred to as stage 0 breast cancer.

“Abbreviated MRI caught over two times more cancers. That’s very, very promising,” said Rahbar, clinical director of breast imaging at the Hutch’s clinical-care partner, Seattle Cancer Care Alliance. “It confirms that when we add contrast and use a higher quality technique like MRI, we catch more cancers. But the abbreviated MRI also had a higher biopsy rate and more false positives than DBT.”

Weighing the harms and benefits

You might call that sticking point No. 1. The AB-MRIs are more sensitive so they found more suspicious spots that could potentially be cancer.

In the study, AB-MRI called for 107 biopsies, a procedure where breast tissue is excised and analyzed for cancer cells, which was nearly four times the rate of DBT (it called for 29). Biopsies can leave the breast bruised and sore for a few days, and as always, complications can happen.

Rahbar said with abbreviated MRIs “only about 20% of the biopsies were actually cancer,” referring to the positive predictive value of each test, or how often it was right in identifying a suspicious lesion as a cancer. “In 3D mammography, it was about 35%,” he said.

In other words, the majority of women who have a potential breast cancer identified by AB-MRI will undergo an unnecessary biopsy.

“There’s a higher number of false positives with abbreviated MRI,” Rahbar said. “While the high sensitivity is very exciting — they’re catching more cancers — we’d also be recommending more biopsies. And they will be more expensive.”

It’s also unclear how frequently women would need AB-MRIs. The trial was a two-year study, but the paper reported only the first round of screening.

“It’s possible fewer cancers will be identified in subsequent rounds of MRI, so it’s not clear if this test should be done yearly,” Rahbar said.

How much will it cost? It’s complicated

That brings us to sticking point No. 2: cost.

Currently, the cost for an MRI can run anywhere from $400 to $3,500 depending on where in the country it’s done and what part of the body is being imaged. The business data site Statista lists the average cost in 2017 at $1,430.

“Breast MRI is expensive,” said Gary Lyman, MD, MPH, a health economics researcher and policy expert with the Hutchinson Institute for Cancer Outcomes Research, or HICOR. “That’s why the guidelines limit it to high-risk settings. Currently, breast MRI is only approved for patients with a family history or a risk of 20% or greater for developing breast cancer.”

In use since the late 1970s, MRIs can take anywhere from 30 to 90 minutes and involve an IV-injected contrast agent or dye and multiple images taken over a period of time. The abbreviated MRIs performed in the study also used a contrast agent but took fewer images. They were also much shorter — each took less than 10 minutes.

But as it now stands, “there’s no standard for an abbreviated MRI,” Rahbar said. “This is the first study to examine it across many sites in a clinical trial. We don’t even have a realistic price for it because there’s no insurance code.”

That code, known as a CPT or “current procedural terminology” code, is what’s used for medical billing. No medical billing code? No insurance coverage.

“This situation is not dissimilar to other new technologies when they first get developed, like tumor sequencing or biosimilars,” Lyman said. “When there’s no code to begin with, it will take a year or two for CMS [the Centers for Medicare and Medicaid Services] to see what’s happening in practice and create a code so it can then be billed.”

Until that happens, Lyman said, it’s pretty much the Wild West. Health centers may have to “fly on their own” in terms of billing and establishing best practices, he said. And patients could potentially be charged full price for an MRI, even though they’re getting a truncated version.

“My guess is CMS will very quickly get a code and be put into the regulations so clinicians can bill for it,” Lyman said. “But this is unlikely to happen in less than a year and could take longer. The results of the next [study] screening will further clarify the performance of this approach and its value to patients, health systems and society. These are the types of studies that we need.”

“Our hope,” he said, “is that the study will provide the impetus for more centers to provide this new test and that insurers will see its benefit to improve early detection.”

But coming up with a price and protocol for a brand-new procedure is not easy, especially when you’re talking about something as fraught as breast cancer screening.

Abbreviated MRIs find more cancers, but they also spawn more biopsies. And if the biopsy is negative, that means additional costs — and potential “harm” — with no benefit, such as the discovery of an early, treatable breast cancer.

Public health researchers like Lyman use statistical models to weigh the harms and benefits to patients — and society at large. But there are many factors to consider. Some women may prefer the more sensitive AB-MRI, even if it means unnecessary biopsies and bruising (some worry about radiation from mammograms). Others may prefer mammography as their go-to screening since it comes without the MRI’s injected contrast (others worry about gadolinium).

“Assessing cost effectiveness is very challenging,” Rahbar said. “It’s a moving target and creating a consensus for society can be controversial and hard to measure. But it’s important work that needs to be done.”

And it most likely will be done very soon, Lyman said. Some researchers are already trying to figure out AB-MRI’s value.

“Before there’s a new code for this, HICOR or someone else will most likely do an economic analysis to see if it’s cost effective,” he said. “You have to model the whole thing out with all the probabilities and cost figures to see if it’s saving you money or costing you money. It may not save you money, but the added cost is worth it because you’re saving lives.”

In the meantime, more and more women are learning about their breast density, thanks to the efforts of patient advocates like Dr. Nancy Cappello, who founded the nonprofit AreYouDense.org and worked to pass mandatory density notification legislation in all 50 states.

Cappello died last year due to complications from myelodysplastic syndrome treatment, but her husband, Joseph Cappello, has continued on with the advocacy work he and his wife performed for nearly two decades.

To him, offering women a “mini-MRI” is a no-brainer.

“It’s obvious it’s better than a 2D or 3D mammogram,” said the retired real estate broker from Woodbury, Connecticut. “It takes less time, therefore it costs less and insurance companies will be more inclined to take a peek at it. I see nothing but good.”

Does he worry about the false positives and unnecessary biopsies? After all, AB-MRIs might scare women or cause them to suffer needlessly.

“You know what scares women?” he said. “Cancer scares women. When a doctor tells you you’ve got cancer, but they couldn’t find it with a mammogram, that’s scary. Believe me, there are no problems when women get information. Women deserve all the information they can get about their breasts.”

What advice does Rahbar have for women with dense breasts? Keep in mind, there are varying levels. Find out more about breast density.

“There’s a great momentum of evidence in this direction and that evidence will soon be fully in practice,” he said. “Right now, patients should talk to their provider and get a full risk assessment. In some cases, women with dense breasts may qualify for a standard MRI.”

Other than that, he said to stay tuned.

“We’ll likely soon have cheaper screening options paid by insurance, including abbreviated MRI,” he said. “This is going to move the needle and make people think differently about ways to do screening. It’s clear there’s real value here.”

This article was originally published on February 27, 2020, by Hutch News. It is republished with permission.