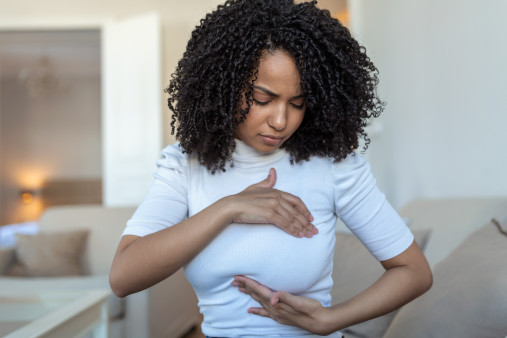 In a major shift, breast cancer has surpassed lung cancer as the leading cause of cancer death among Black women as of 2019. This news is one of the key findings in Cancer Statistics for African American/Black People 2022, published today in CA: A Cancer Journal for Clinicians, a peer-reviewed journal of the American Cancer Society and its consumer-friendly companion, Cancer Facts & Figures for African American/Black People.

African American/Black people have a disproportionately high cancer burden compared to other population groups. According to the report, the risk of cancer death for Black individuals remains 19% higher for men and 12% higher for women compared to White individuals. The gap for breast cancer is more alarming; Black women are 41% more likely to die from breast cancer than White women despite a lower risk of being diagnosed with the disease.

Reasons for these disparities are complex but largely stem from less access to high-quality care and optimal treatment as a repercussion of long-standing institutional racism.

“African Americans continue to have a disproportionate burden of cancer mortality largely because of lack of health insurance and other socioeconomic barriers that limit access to cancer prevention and care,” said Dr. Karen Knudsen, American Cancer Society Chief Executive Officer. “Moreover, African American people are overrepresented in states that have not expanded Medicaid. Expanding access to care for all low-income persons and increasing trust in the medical community through provider education can substantially reduce the burden of cancer in African Americans.”

To monitor progress in reducing these inequalities, investigators at the American Cancer Society compile the most recent data on cancer incidence, mortality, survival, screening, and risk factors for Black people in the United States every three years using population-based data from the National Cancer Institute and the Centers for Disease Control and Prevention.

Prostate cancer is the most commonly diagnosed cancer in Black men. Incidence rates are 73% higher than in White men whereas death rates are more than twice as high (37.9 versus 17.8 per 100,000 during 2015-2019). The larger disparity for mortality likely in part reflects lower quality treatment in Black men, which has even been demonstrated within equal-access health systems like the Veterans Health Administration. Thus, it is particularly worrisome, the researchers note, that the diagnosis of advanced-stage prostate cancer has been increasing in Black and White men by at least 5% per year since 2012 as a result of the decrease in prostate-specific antigen (PSA) testing.

“Cancer disparities in the Black community are the result of myriad causes rooted in institutional inequities,” said Tawana Thomas-Johnson, Senior Vice President and Chief Diversity Officer at the American Cancer Society. “We must address structural racism as a public health issue to close the gaps and advance health equity.”

The report concludes that continued documentation of inequalities in the health of Black people is necessary but insufficient to effect change. Future research should not only explore the influence of systemic racism on health but also develop mechanisms to reverse course, from requirements for increased diversity in clinical trials and provider education to health system financial incentives for the provision of equitable care across the cancer continuum.

Other highlights of the report include:

This article was originally published February 10, 2022, by American Cancer Society. It is republished with permission.