People with blood cancers and those on chemotherapy may not respond adequately to their first two vaccine doses.

More than half of blood cancer patients who did not have detectable antibodies against SARS-CoV-2 (the coronavirus that causes COVID-19) after two vaccine doses were able to produce antibodies after a third dose, according to a recent report. Another study found that boosters improved response in people receiving chemotherapy for solid tumors.

Together, these findings support recent recommendations that people with cancer should receive a booster—but also show that some remain unprotected even after three doses.

“The additional COVID-19 vaccine dose appears to be improving immune response in many people with blood cancer—one of many conditions that can suppress a person’s immune system,” Gwen Nichols, MD, chief medical officer of the Leukemia & Lymphoma Society, said in a press release. “However, while vaccination offers protection to the majority of blood cancer patients, some will not mount a full antibody response even with this additional dose.”

People with certain types of cancer are at greater risk for severe COVID-19 and death, especially those with blood cancers (also known as hematologic malignancies) such as leukemia, lymphoma or multiple myeloma. What’s more, while most people with solid tumors produce good antibody responses after a two doses of the Pfizer-BioNTech or Moderna COVID-19 vaccines, some blood cancer patients don’t respond well and may not be fully protected.

Some blood cancers directly affect antibody-producing B cells. For example, chronic lymphocytic leukemia and multiple myeloma involve proliferation of abnormal B cells or plasma cells that produce dysfunctional antibodies and crowd out healthy cells. In addition, many blood cancer patients are treated with medications that impair B-cell function, including targeted therapies that block CD20 (such as rituximab, or Rituxan) or BTK (such as ibrutinib, or Imbruvica).

Fortunately, a third vaccine dose does the trick for some patients.

The researchers then did a follow-up study looking at responses to a booster dose in 49 patients with B-cell maligancies in the registry, including 25 with chronic lymphocytic leukemia, 18 with non-Hodgkin lymphoma and four with multiple myeloma. More than half were men, most were white and the median age was 66 years. All but one had received two doses of the Pfizer-BioNTech or Moderna mRNA vaccines; two thirds got the same brand as a booster while a third got something different. 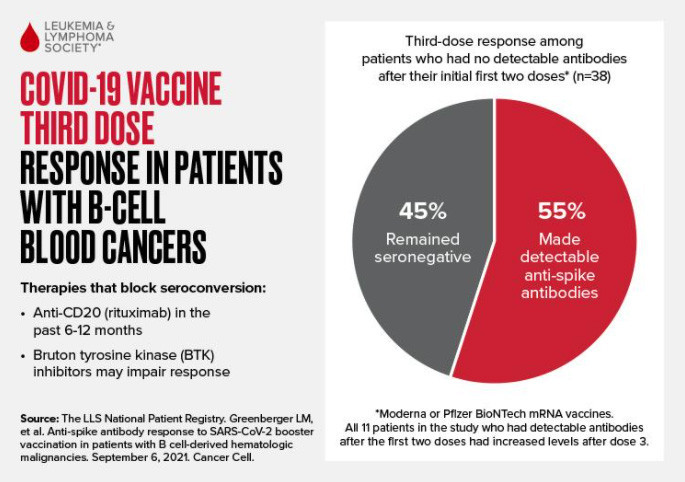 As described in a report in Cancer Cell, Greenberger’s team assessed SARS-CoV-2 spike antibody levels approximately a month before and a month after the third vaccine dose. Prior to the booster, 38 people (78%) tested negative for antibodies, seven had low antibody levels and four had an adequate response (defined as at least 100 units per milliliter).

Antibody levels alone do not give a full picture of immunity, however. A subset of neutralizing antibodies are most important for disabling SARS-CoV-2. Memory B cells (which produce antibodies against pathogens encountered in the past) and T cells (which kill virus-infected and malignant cells) also play a role. Previous research showed that most blood cancer patients produce T-cell responses to SARS-CoV-2 after infection. However, another recent study found that a majority of multiple myeloma patients who did not produce SARS-CoV-2 antibodies after vaccination also had deficient memory B-cell and T-cell responses. The present study did not measure neutralizing antibody, memory B-cell or T-cell responses, but a T-cell study is in the works.

“We conclude that some patients with hematologic malignancies who are seronegative after a full course of vaccination may benefit from a booster,” the researchers wrote. “However, regulators, patients and health care providers should be aware that a sizeable subset of patients with blood cancer may remain at risk of breakthrough COVID-19 infections after full vaccination followed by booster vaccination.”

A second study, published in Nature Medicine, Rachna Shroff, MD, of the University of Arizona Cancer Center, and colleagues compared immune responses to the Pfizer-BionTech vaccine in 53 patients with solid tumors who were on chemotherapy and 50 healthy people without cancer. There was considerable variability in cancer types, chemotherapy regimens and the timing of treatment relative to vaccination.

While cytotoxic chemotherapy does not directly target B-cells like some blood cancer medications, it indiscriminately kills fast-growing cells, including stem cells in the bone marrow that give rise to red blood cells, immune system white blood cells (including B cells and T cells) and platelets.

After the first vaccine dose, neutralizing antibodies were detected in 67% of the cancer patients. Antibody levels increased threefold after the second dose. A similar pattern was observed for T cells. Most of the nonresponders had their immune responses measured a week or two after their most recent chemotherapy administration, when blood cell levels are lowest.

Two participants (one with cholangiocarcinoma and one with pancreatic cancer) who did not have detectable antibody responses one week after the second dose did so before the third dose, suggesting that antibody responses might be delayed but not completely absent. But both antibody and T-cell responses were diminished relative to those seen in people without cancer.

The researchers then looked at immune responses after a third dose of the vaccine in 20 cancer patients. One week after the booster, 16 study participants showed a median threefold increase in neutralizing antibodies, bringing them into the range of people without cancer. However, there was no further improvement in T-cell levels.

The study authors said it was encouraging to observe T-cell responses in most vaccinated cancer patients, including some with undetectable neutralizing antibodies. “Given that T cells reduce viral loads and disease even when neutralizing antibody levels are low, these data suggest that vaccination might confer at least partial protection and reduce the likelihood of severe COVID-19 in most patients with cancer,” they wrote.

“Together, our data suggest that most patients with cancer on active chemotherapy are likely to exhibit improved antibody levels, which has been correlated with protection against disease, after a third immunization,” they concluded. “However, given the relatively modest increases in antibodies and recalcitrance of T cells, expectations should remain tempered as to the degree of benefit.” Antibody tests, they added, could potentially be used to select individuals who need a booster.

Booster Recommendations
In August, the Food and Drug Administration (FDA) updated its emergency use authorization for the Pfizer-BioNTech and Moderna vaccines, and the Centers for Disease Control and Prevention (CDC) recommended an additional dose for moderately to severely immunocompromised people. These include patients being treated for cancer, organ and stem cell transplant recipients, people taking immunosuppressive drugs and people with advanced or untreated HIV.

The FDA and CDC later went further, recommending Pfizer-BioNTech and Moderna boosters after six months for people ages 65 and older, younger adults with underlying health conditions—including cancer—and those at high risk for exposure due to their work or living situation. All adults who received the Johnson & Johnson vaccine can get a booster two months after their first shot.

The National Comprehensive Cancer Network (NCCN) recommends that people with active blood cancer and those with solid tumors who are currently receiving or have recently received treatment should get a third dose of the Pfizer-BioNTech or Moderna vaccine. In addition, NCCN and the American Association for Cancer Research also advise boosters for caregivers and people living in the same household with cancer patients.

The Leukemia & Lymphoma Society further advises blood cancer patients to continue to employ additional precautions like wearing masks and social distancing to lower their risk of acquiring the coronavirus.