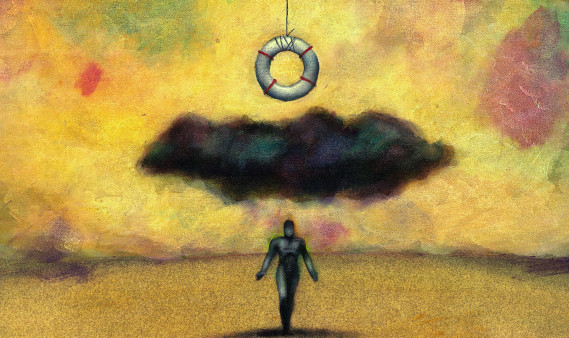 A study will evaluate whether counseling helps to lessen symptoms of depression and anxiety and improve quality of life.

Miguel and Bonita (Bonnie) Birge first met in high school, when Bonnie’s brother introduced them. The casual start became a lifetime commitment: they celebrated their 20th wedding anniversary in late June. Many others share their Aurora home, including four dogs, four cats and two snakes, which Miguel says are just as companionable and worthy of affection as the furry four-legged friends.

“If you love an animal, care for it and show it love, it will in turn respond,” said Miguel, 46.

But for much of their time together, the Birges have had another unwelcome companion — the physical and mental stress caused by disease and injury. Diagnosed at 23 with Hodgkin’s disease, Miguel endured a grueling four-drug combination chemotherapy regimen that goes by the acronym MOPP. He emerged from the exhausting six-month ordeal haggard but cancer-free.

Miguel worked steadily through 2008 in window and door sales and contracting. But then a drunk driver plowed into his car, severely injuring his back, ending his work career and ushering in a decade of physical and emotional challenges.

Around 2012, severe abdominal pain he compared to “beating the hell out of you with a baseball bat” required surgery to remove the tail of his pancreas, along with his spleen and gallbladder. Last April, pain in his upper stomach sent Miguel to the emergency department at UCHealth University of Colorado Hospital on the Anschutz Medical Campus, where a CT scan revealed nodes in his right lung. He was diagnosed with stage 4 non-small cell lung cancer (NSCLC).

Miguel underwent genetic testing to see if he could be treated with drugs that inhibit cancer cell growth driven by a genetic mutation called ALK that occurs in about 4% of NSCLC patients. He didn’t have the mutation, and his medical oncologist, Ross Camidge, MD, PhD, Joyce Zeff Chair in Lung Cancer Research at the University of Colorado Cancer Center, told him chemotherapy was his only option for keeping the disease at bay. He began thrice-weekly treatments at the end of May.

Camidge, however, had another treatment suggestion for the Birges. He pointed them to a study sponsored by the Colorado School of Public Health that tests the effectiveness of providing mental health support to relieve stress, depression and anxiety among underserved patients with lung and head and neck cancers and their caregivers. Patients at UCH, National Jewish Health, Denver Health, Saint Joseph Hospital and St. Mary’s Hospital and Regional Medical Center in Grand Junction are enrolled in the trial.

The randomized study aims to enroll 440 patients. Half will receive “stepped” mental health services: the amount and intensity of counseling increases with the severity of their assessment for emotional stress and depression. The control group will receive a list of local and national counseling resources.

The Patient-Centered Outcomes Research Institute, which investigates the effectiveness of treatment options, funds the $1.9 million study, slated to conclude in 2020. The Birges qualified for the trial and began counseling sessions in June 2019.

“All of these side effects can lead to symptoms of depression and feeling helpless,” said Raben, who is a co-investigator in the study.

During an interview in late June, Miguel put that observation in down-to-earth terms.

“I have trouble dealing with the end-of-life thoughts,” he said. “How do I address the end of my life and how do I prepare for that? I’ve been dealt some hard cards.”

The PCORI trial builds on the findings of two earlier studies, noted principal investigator Evelinn Borrayo, PhD, associate director for community outreach and engagement at CU Cancer Center and associate director of research with the Latino Research and Policy Center at the Colorado School of Public Health. A small study in 2013 at Denver Health, dubbed EASE, led by Kristin Kilbourn, PhD, a licensed clinical psychologist with UCD, suggested that phone counseling for patients with head and neck cancers could help to “buffer” the physical and emotional challenges of treatment. In 2016, another study at Denver Health concluded that a lack of mental health services and access to them contributed to delays in medical treatment for underserved patients with head and neck and lung cancers.

“What was clear is that these patients need a lot of mental health support, but there is very little for [that] aspect of their treatment,” Borrayo said.

The EASE study, Borrayo added, indicated that it would be important to tailor counseling interventions to the mental health needs of each patient — some may experience few or no symptoms while others may be affected severely — and that patients could benefit from face-to-face meetings with counselors (although phone contact is still an option for patients who have trouble arranging transportation).

Counseling that relieves depression and anxiety among patients and caregivers is important simply to improve their quality of life. But it can also play a vital role in keeping a patient’s treatment regimen on track, Raben noted.

“The worry of whether the treatment is going to work, compounded with the symptoms they experience during treatment, can really wear a patient out and make them lose their desire and passion for life every day,” he said.

Raben’s words echo those of Miguel as he contemplates a battle he said is worth fighting but he also concedes will be very difficult to win.

“The issue is that you get so beat down physically that it converts to mental stress,” he said. “Eventually you get tired of fighting that. It wears on you. Some people just get so tired that they want it to stop.”

The PCORI study’s emphasis on including mental health services as an integral part of care for head and neck and lung cancer patients addresses a fundamental health care problem, Raben added.

“It’s an area that warrants further research and support because many times patients who are underserved don’t have access to health care that others do and many do not get the best or optimized, proactive care while they undergoing treatment or after treatment for these types of cancer,” he said.

Staying on track
Feelings of depression and anxiety must be addressed if a patient is to benefit fully from treatment, said Alejandra Solis, a licensed treatment therapist with Denver Health who is working with both Miguel and Bonnie.

“We try to help people think of ways to adjust to the unknown,” Solis said. “If they are feeling depressed, they might stop taking their medications or engage in unhealthy behaviors. We know that everything is connected, so if one piece is not functioning properly, everything is affected.”

Caregivers are a key part of that connection, so the trial focuses on also helping them to find ways to cope, Solis added.

“It’s very important for caregivers to take care of themselves,” she said. “I ask them, ‘What do you do for yourself?’ If we’re not taking care of ourselves, how can we be expected to take care of others?”

Bonnie helped Miguel through his previous bouts with disease and injury, but acknowledged his lung cancer diagnosis has created new pressures. There is financial stress — Bonnie’s job as a mechanical engineer is the couple’s primary source of income — but fear of what lies ahead is a greater source of anxiety, she said.

“My biggest concern is looking at the future and not knowing,” she said. “It feels like I won’t have Miguel around when I retire. When I first found out that he had cancer, that was all I could think about. I dwelled on it.”

Solis said she helps Bonnie and others in similar situations cope by focusing on things they can control rather than things they can’t — the fact that a loved one has a serious disease being the primary example of that.

“They can learn to decrease the symptoms of depression and anxiety by having information and power,” Solis said. “For things they can’t control, we talk about how to alleviate those feelings by going for a walk, calling a friend, writing in a journal, joining a group or identifying a passion.”

Sources of support for cancer patients
For both Miguel and Bonnie, their animals provide welcome distraction and comfort. Bonnie said she’s also learning to focus on the present rather than obsess about the future.

“We have talked about instead of thinking so far out, living in today,” she said. “When I start thinking about the future now, I just remind myself that we’re not there yet and that I need to take one day at a time and think about what I have today. I tell myself I have Miguel now and I need to enjoy the time I have with him now.”

Miguel said he’s found help with coping strategies he learned and friends he made through Alcoholics Anonymous (AA). He’s been sober for seven years. He wants to extend those support skills to patients with cancer, a choice he said Solis encourages.

“AA is another tool that I use to help me deal with the cancer issue, and I hope to use it to help others,” he said. “Life is not easy for everybody. Helping others to get through hard days helps me as well.”

At the same time, Miguel has also needed what Borrayo calls “problem-focused support” for pain and nausea caused by his cancer and chemotherapy. In those instances, he’s turned to the CARE (Clinical Assessment & Rapid Evaluation) Clinic at the CU Cancer Center, which helps to stabilize patients struggling with acute symptoms. The Birges said the clinic’s providers — nurses, physicians and pharmacists — have so far prevented emergency department visits and hospitalizations for Miguel.

Toward holistic treatment
The study will ultimately evaluate how well counseling helps to lessen symptoms of depression and anxiety and perceived stress, improve quality of life and strengthen coping skills, Borrayo said. She would also like to see mental health support for cancer patients continue beyond treatment.

“As time goes by and people survive, the support doesn’t tend to be as available,” she said. “I honestly think we are focused on patients and not looking enough at survivorship as a long-term issue. Many will continue to struggle with anxiety and depression for the rest of their lives.”

In Raben’s view, mental health support for cancer patients should be part of an overall symptom management strategy that includes nutritional support, exercise and software programs that connect patients and providers on a regular basis to address issues.

“The more we can holistically approach patients and proactively manage them, the better our care will be,” Raben said.

For more information on the trial, contact Jose Barron at 303.724.5439 or jose.barron@ucdenver.edu.

This article was originally published on September 25, 2019, by the University of Colorado Cancer Center. It is republished with permission.