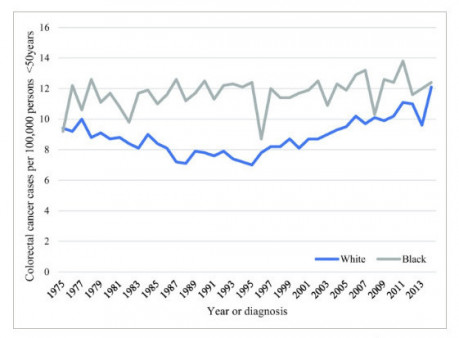 Trends in Colorectal Cancer Incidence Rates in Adults Younger Than Age 50 Years by Race, 1975 to 2014 Courtesy of American Cancer Society

People at average risk in the general population should start screening for colon and rectal cancer at age 45 instead of 50, according to updated recommendations from the American Cancer Society (ACS). The revised guideline offers six different testing options, including stool-based tests and visual examinations.

Although most people diagnosed with colorectal cancer are 50 or older, studies show that rates are rising among young and middle-aged people, especially African Americans. The updated recommendation is supported by mathematical models showing that the benefits of starting screening at 45 outweigh the drawbacks.

“When we began this guideline update, we were initially focused on whether screening should begin earlier in racial subgroups with higher colorectal cancer incidence, which some organizations already recommend,” said Richard C. Wender, MD, ACS chief cancer control officer and one of the guideline authors. “But as we saw data pointing to a persistent trend of increasing colorectal cancer incidence in younger adults, including ACS research that indicated this effect would carry forward with increasing age, we decided to reevaluate the age to initiate screening in all U.S. adults.”

More than 97,200 people in the United States will be diagnosed with colon cancer and more than 43,000 will develop rectal cancer this year, according to the ACS. Colorectal cancer is the third leading cause of cancer-related death for U.S. men and women, with more than 50,600 deaths expected in 2018. Risk factors include family history, being overweight and eating certain foods, such as processed meats.

Colorectal cancer incidence has declined steadily over the past two decades among people age 55 and older, thanks to changes in risk factors and screening that leads to early treatment. But since 1994, this cancer has increased by 51 percent among those under 50. One recent analysis found that adults born around 1990 have twice the risk of developing colon cancer and four times the risk of rectal cancer as those born around 1950, according to the ACS. The guideline authors note that 5.1 percent of people who died from colorectal cancer between 2010 and 2014 were ages 45 to 49—approaching the 7.6 percent who were 50 to 54.

The revised guideline calls for screening of adults 45 and older with an average risk of colorectal cancer. However, this recommendation—the only major change since the 2008 update—is not as strong as the one for adults age 50 and older. People in good health with a life expectancy of at least 10 years should continue screening through age 75. Decisions about screening should be made on an individual basis between the ages of 76 and 85; the ACS does not recommend screening after 85.

“Lowering the starting age is expected to benefit not only the segments of the population who suffer disproportionately from colorectal cancer—Blacks, Alaska Natives and American Indians—but also those individuals otherwise considered to be at average risk,” the guideline authors wrote.

The change would make 22 million people between the ages of 45 and 49 newly eligible for screening, the New York Times estimates.

The ACS guidelines include six options for colorectal screening.

The fecal immunochemical test and guaiac fecal occult blood test look for blood in the stool. These tests involve collecting a stool sample at home and mailing it to a lab for analysis. The multitarget DNA test (such as Cologard) looks for DNA changes associated with colon cancer.

Structural examinations involve viewing the inside of the colon to look for abnormal growths, called polyps, that can progress to cancer. A colonoscopy uses a flexible lighted tube to view the entire colon, while a sigmoidoscopy views the lower part of the colon and rectum. CT (computed tomography) scans, sometimes called a “virtual colonoscopy,” use low-dose radiation to visualize the interior of the colon.

Colonoscopy and sigmoidoscopy require advance bowel preparation and may be done under sedation. Stool-based tests are not as precise as the invasive examinations, but some people are more likely to get them done. As a part of the screening process, however, those with positive results on any of the other tests should receive a follow-up colonoscopy.

The new guidelines do not prioritize among these screening options, noting that individuals have varying preferences and offering more alternatives makes it more likely that people will get the recommended screening. Availability and cost are also considerations; fecal occult blood tests, for instance, are much less expensive.

The U.S. Preventive Services Task Force—a group of volunteer experts whose recommendations influence which screening tests are covered by insurance—continues to recommend colorectal screening starting at age 50. According to the task force, data do not show that one screening method is better than the others.

Click here to read an ACS press release about the updated recommendations.