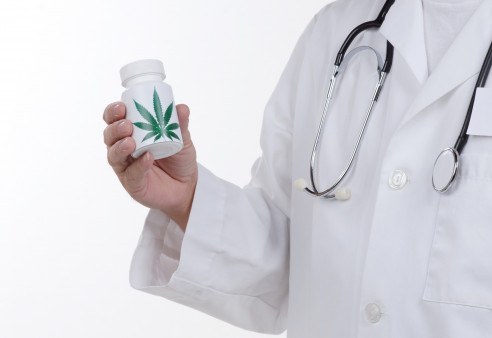 New research suggests some cannabinoid compounds may inhibit or even prevent the growth of colon tumors.

Over the past several years, cancer researchers have been investigating the benefits of medical marijuana for a wide variety of cancers, including brain cancer and breast cancer. Now, researchers at Penn State College of Medicine in Hershey, Pennsylvania, say some of the compounds in the drug may help combat colon cancer, a recent press release from the university reports.

The study, which tested the effects of synthetic versions of the cannabinoid compounds found in marijuana on colon cancer cells, suggests that some of them may inhibit the growth of colon tumors. Researchers also tested two other compounds most commonly associated with cannabis—THC CBD—but those were found to have little to no effect.

For their report, published in the journal Cannabis and Cannabinoid Research, scientists tested how 370 different synthetic cannabinoid compounds affected seven different types of human colon cancer cells. Of these compounds, 10 were found to be effective at stopping cancer cell growth in its tracks. However, researchers remain unsure about how exactly many of these compounds worked to reduce the viability of these dangerous tumors.

“We know how one of them works, which is by inhibiting the division of cells in general,” said Kent Vrana, MD, chair of the Department of Pharmacology at Penn State College of Medicine, who worked on the study. “We also found that the most potent and effective compounds don’t seem to work through traditional marijuana receptors, although we’re not sure of the exact mechanism yet.”

Moving forward, researchers say they plan to further test the 10 effective compounds and start trying to alter them to make them even more potent against cancer. Eventually, they hope to explore the potential for using these compounds to develop new colon cancer treatments.

To learn more about research exploring the effects of cannabis on cancer, click here.