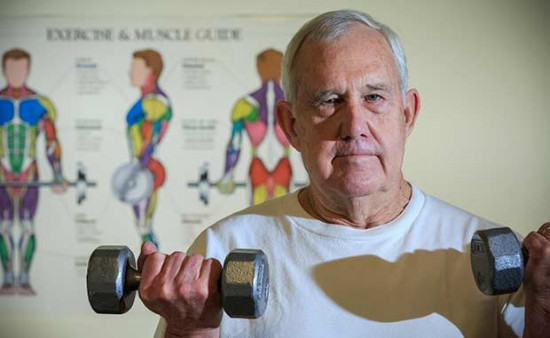 Connecting the Dots Between Weight Loss and Prostate Cancer

U.S. veterans help shed light on link between dropping pounds and slowing progression of the disease.

Obesity and prostate cancer are two of the most common medical issues facing older men today. These health concerns are particularly prevalent among U.S. veterans.

That is why Dr. Jonathan L. Wright, a urologic oncologist at Fred Hutchinson Cancer Research Center and the University of Washington, has teamed up with colleagues at Fred Hutch, UW and investigators at VA Puget Sound Health Care System to lead a study in overweight men with low-grade, slow-growing prostate cancer who have decided to take an “active-surveillance” approach to closely monitor their prostate cancer as opposed treating it with surgery or radiation.

The Fred Hutch–based Prostate Cancer Active Lifestyle Study, or PALS for short, aims to determine whether weight loss achieved through a structured diet and exercise regimen will improve the short- and long-term health of men such as study participant Allan “Gene” Asay, a 75-year-old Vietnam veteran from Bellingham, Washington.

While his long-term outcome has yet to be revealed, Asay is delighted with his initial results since joining the study in May.

‘It Has Just Turned My Life Around’

“I’ve lost 20 pounds or so in the last six months, and I feel great,” he said. “It has just turned my life around.”

Since he joined the study, Asay has made the 180-mile, round-trip commute between his home and Seattle more than 10 times to meet with exercise physiologist Matthew Van Doren and nutritionist Sarah Altvater in the Fred Hutch Prevention Center, a unique facility that houses a state-of-the-art exercise research center and a human nutrition laboratory that supports a variety of feeding studies.

From Van Doren, Asay has learned about the importance of stretching, cardiovascular and resistance exercise, and consistently getting his heart rate into a fat-burning zone, among other things. From Altvater, he has learned how to keep a food journal to track every calorie and gram of fat that passes his lips, and how to make healthy food choices, like eating more vegetables and staying away from sugary drinks and pastries. “I have skim milk in my coffee now and I try and stay away from cheese, even though I still love it,” said the retired dairy farmer.

Those choices have since become second nature, Asay said in a phone interview the day after Halloween.

“Before I joined the study, I’d go to Costco, I’d go by the bakery and the first thing I’d have would be a sweet roll. Last night, my wife had candy out for the trick-or-treaters and that doesn’t even interest me anymore.

“I don’t know why,” he said incredulously, “but I just don’t have the craving anymore.”

At a recent six-month follow-up visit to the Prevention Center, he underwent treadmill endurance testing to measure his (considerable) progress and one last training and nutrition session before “graduating” to a home-based program for the remainder of the study. That day, Asay learned that actually he had lost 21.1 pounds, to be exact, down from his starting weight of 252.3. Just halfway through the yearlong intervention, he had already exceeded the study’s 7 percent weight loss goal.

And he’s not done.

“I want to get down to 200 pounds, if that’s possible,” Asay said. “I’m not going to stop until I do. Even if it takes a year or two years, I’ll keep at it until I reach my goal.” To this end, Asay plans to keep using his hometown gym membership, the exercise equipment in his garage and the nature trails that surround his Lake Samish home.

When asked if he was nervous about going it alone for the remainder of the study, without the frequent check-ins with his personal trainer and nutritionist, Asay said he wasn’t. “Matt and Sarah have helped me so much in this first six months that I know pretty much what I have to do,” he said. “They’ve given me a perfect foundation.”

Investigating the Role of Glucose on Cancer Progression

With the help of study participants like Asay, Hutch oncologist Wright and colleagues are interested in investigating the role of impaired glucose regulation — commonly associated with obesity — in the progression of prostate cancer. They hypothesize that keeping glucose levels in check through weight loss will slow the growth of the cancer and improve long-term survival.

The National Cancer Institute–funded study is in the process of enlisting 200 Seattle-area men — about half of whom so far, like Asay, have been veterans enrolled in the local VA. These men are a particularly relevant group to study, said Wright, a joint associate member of the Prostate Studies Group in the Public Health Sciences Division at Fred Hutch and an associate professor of urology at UW School of Medicine. Wright also cares for patients at Seattle Cancer Care Alliance, Fred Hutch’s clinical care partner, and the VA Puget Sound Health Care System in Seattle.

“Obesity and prostate cancer are both common diagnoses in older men,” he said, “but in our veterans, the rates of these two diseases are even higher,” especially among those who served in the Vietnam War and were exposed to Agent Orange, an herbicide that has been linked to an increased risk of aggressive prostate cancer, among other malignancies.

Wright’s father served a year in combat in the Vietnam War as an infantry soldier, he said, “making the importance of providing care to our veterans even more personal for me.”

Although men on active surveillance have low-risk diagnoses, 50 percent will experience disease progression that requires more extensive treatment, such as surgery or radiation. Wright and his team hypothesize that losing weight through a healthy diet and physical activity could decrease the rate of disease progression.

‘An Active Yet Noninvasive Therapy’

“Many men on active surveillance are anxious about doing ‘nothing’ for their prostate cancer. This study has the potential to provide both patients and providers with an active yet noninvasive therapy that could benefit not only their prostate cancer, but also their overall health and quality of life,” Wright said.

“We all have busy lives and priorities that make it difficult to stick to a diet and exercise regimen,” he said. “Part of our goal here is to prioritize a shift in lifestyle through a structured, supervised program that participants can sustain after the study concludes.”

This intervention, which is modeled on the National Institutes of Health’s Diabetes Prevention Program, has a track record of success for participants keeping the weight off years later. “The DPP has been shown to help participants — both men and women — lose up to 7 percent of their body weight after the six-month intervention and keep the weight off 10 years later,” Wright said. “This is the first time, to our knowledge, that the intervention has been done solely in male cancer patients.”

Findings from this study, Wright said, will help researchers understand how obesity affects prostate cancer outcomes, and it could have “a profound impact” on clinical practice by providing a lifestyle intervention as a therapy for men, like Asay, who opt for active surveillance.

“I never realized how much I could benefit from working with a nutritionist and personal trainer,” he said. “It’s the best thing I think I’ve done in a long time.”

As an added bonus, Asay said his new lifestyle habits have rubbed off on his wife, Bryce, who has shed about 10 pounds since he joined the study. “She still doesn’t like vegetables and probably never will, but together we’re eating better.”

Kristen Woodward, a science editor at Fred Hutchinson Cancer Research Center, has been in communications at Fred Hutch for 20 years. Before that, she was a managing editor at the University of Michigan Health System and a reporter/editor at The Holland Sentinel, a daily in western Michigan. She has received many national awards for health and science writing. She received her B.A. in journalism from Michigan State University. Reach her at kwoodwar@fredhutch.org.

This article was originally published on the Fred Hutch website on November 9, 2017. It is republished with permission.