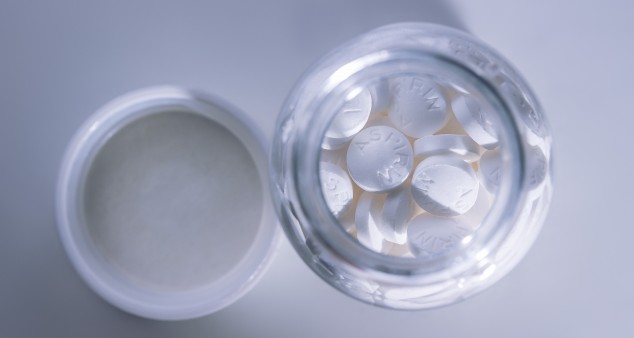 Hepatitis B patients who used aspirin therapy had a 37 percent lower rate of hepatocellular carcinoma.

Taking an aspirin a day—often recommended to help prevent heart disease—may also lower the risk of liver cancer, according to a study presented at the American Association for the Study of Liver Diseases (AASLD) Liver Meeting, held this week in Washington, DC.

In a study of people with chronic hepatitis B in Taiwan, those who used aspirin therapy were nearly 40 percent less likely to develop hepatocellular carcinoma than those who did not take daily aspirin.

Over years or decades, chronic hepatitis B or C, heavy alcohol use, fatty liver disease and other causes of liver injury can lead to the development of cirrhosis and hepatocellular carcinoma, a type of primary liver cancer that is often detected late and is difficult to treat.

“Liver cancer is the second leading cause of cancer death worldwide, and HBV is the most prevalent risk factor in our region,” Lee said in an AASLD press release. “HBV-related liver cancer is therefore a major public health issue with a severe socioeconomic impact.”

Often prescribed as a pain reliever, aspirin also has anti-inflammatory properties and “thins the blood” by inhibiting platelet clotting. Taking low-dose aspirin each day, known as aspirin therapy, is recommended for the prevention of cardiovascular disease and colon cancer in older adults. But there is little evidence about its effect on liver cancer.

Lee’s team analyzed a nationwide cohort in Taiwan using medical records from the National Health Insurance Research Database between 1998 and 2012. They screened 204,507 people with chronic hepatitis B, excluding those with other types of viral hepatitis, and identified 1,553 patients who used continuous daily aspirin for at least three months. People in this group were matched by age and sex with four people who did not use aspirin therapy (a total of 6,212 control subjects).

About three quarters were men and the average age was 54. About 5 percent had liver cirrhosis. As expected, preexisting cardiovascular disease and its risk factors, such as diabetes, high blood fat levels and high blood pressure, were more common in the aspirin group.

Less than 10 percent were being treated for hepatitis B with nucleoside/nucleotide analogs such as Viread (tenofovir DF), Vemlidy (tenofovir alafenamide) or Baraclude (entecavir), which has been shown to reduce—but not completely eliminate—liver cancer risk. Those in the aspirin group had been taking it for nearly four years on average.

The researchers found that the incidence of liver cancer in the aspirin group was significantly lower than the rate in the untreated group, meaning the difference probably was not due to chance.

Besides not taking aspirin, other independent risk factors for liver cancer included male sex, older age, cirrhosis and diabetes, while use of statins and nucleoside/nucleotide analogs were protective.

Based on these results, the researchers concluded, “Aspirin therapy was significantly associated with a reduced risk of HCC in patients with chronic hepatitis B.”

“For effectively preventing HBV‐related liver cancer, the findings of this study may help hepatologists treat patients with chronic HBV infection in the future, particularly for those who are not indicated for antiviral therapy,” Lee said.