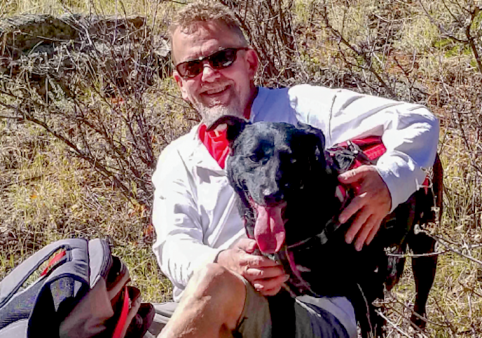 During treatments, Tim Reagan says it was hard to get up each day to walk his dog, Brady. But getting up and out was exactly what he needed.

Tim Reagan saved Brady’s life, adopting the high-energy rescue dog from a shelter. Within a year, Brady returned the favor.

“We were walking on the Friday after Thanksgiving in 2016 and in a rambunctious, playful way he jumped up and bit my arm and it felt really strange,” says Reagan, who retired from a stressful, fast-paced career as director of operations for a professional society so that he could adopt a dog. “My left side was not quite numb but it was desensitized and it was right down the middle of my body.”

He figured it was a pinched nerve and made an appointment the next Monday with his primary care doctor to see what they could do about it. Instead of referring him to a chiropractor like he expected, “She said we need to get you in for an MRI,” Reagan says. “She saved my life.”

The MRI showed Reagan had glioblastoma, the most aggressive type of brain cancer. Since the diagnosis and subsequent death of Sen. John McCain, glioblastoma has gotten a lot of attention in the media. McCain passed away nine years to the day after Sen. Edward Kennedy, who also had glioblastoma.

The cause of glioblastoma is not clear in most cases. It is also unclear why it occurs more commonly in men. What is clear is that glioblastoma is resistant to conventional therapies and people usually live 12 to 15 months after diagnosis.

For Reagan, the diagnosis brought a flood of memories and emotions — his father had died of the disease just 18 days after his own diagnosis. But Reagan’s case was different. His father had had symptoms for a year and a half that his doctors blamed on other conditions, like diabetes or a stroke. And brand-new treatments had just started to offer new hope.

“The first doctor told me, over the phone, I had four months to live. The second doctor told me I had a year to live,” says Reagan. “I went to UCHealth University of Colorado Hospital (UCH) and Dr. Ormond said I think we can do better than that.”

Ryan Ormond, MD, is Reagan’s neurosurgeon and director of the brain tumor program at UCH. Ormond was heartened to see the tumor was discovered before it involved large areas of the brain.

“Tim had several additional advantages,” says Ormond. “He was doing well with good functional status, the tumor was in a part of the brain where it could be surgically removed, and he had some favorable tumor genetic markers that could make him more responsive to chemotherapy.”

For Reagan, treatment meant a multidisciplinary approach including radiation and chemotherapy, as well as surgery. That means his medical oncologist, surgical oncologist, and radiation oncologist collaborated to choose and deliver the best treatments, while working together to manage side effects such as fatigue and loss of balance.

“The side effects of my treatment weren’t so severe that I was inhibited,” says Reagan. “It was a challenge, but I rented an RV and drove across the country to visit my family in New England and stopped in Minnesota along the way. In retrospect, I may have been a bit ambitious. Rest and relaxation are critical for recovery.”

Reagan knows that getting glioblastoma was an unlucky break but he also knows he is lucky to have found the team of providers delivering his care.

“Every one of my caregivers seems to genuinely care about my survival and that makes this journey less of a struggle,” he says.

“Specialists at UCH see more of this kind of tumor than other physicians in our area,” says Ormond. “That experience, including learning what fuels an individual tumor, means focusing on the therapies most likely to be effective. We also can surgically remove more of the tumor without causing significant neurological deficits, leading to longer lives with a better quality of life.”

When Reagan was diagnosed, he set a survival goal of January 2019. While he appears to be on track to reach that goal, there have been some setbacks. Reagan recently learned he has another, smaller tumor that will require surgery. He also made a couple trips to the emergency room when his first surgical site filled up with fluid, causing him to become disoriented.

Douglas Ney, MD, Reagan’s oncologist, specializes in brain cancer. He’s encouraged by Reagan despite the challenges. “Fortunately, glioblastoma patients are living longer than they used to,” Ney says. Still, he wants to do more. “The outcomes are still not good enough.”

Reagan has some thoughts on why he is a brain cancer survivor nearly two years following his diagnosis. He recommends getting (and staying) in shape before something like this happens.

“I can guarantee you this,” says Reagan. “If I had still been working, I would not have gone to the doctor, I would have been 50 pounds heavier and I may not still be alive and doing as well as I am.”

He also credits regular appointments with Emily Cox-Martin, PhD, a licensed clinical psychologist in the CU School of Medicine Department of Medical Oncology. Reagan says he will not allow himself to wake up and go to bed thinking about this disease day in and day out.

“Cancer is probably going to beat me; it’s not theoretical,” says Reagan. “But my therapist asked me a very practical question — are those thoughts helpful? If not, I try to get past the thoughts that don’t serve me well.”

In the midst of all Reagan’s personal commitments and the appointments with his health care providers, he also makes time to attend the UCH brain tumor support group, a healing art therapy class called Sites and Insights, and outdoor experiences lead by an organization called Live by Living. He says cancer is a club no one wants to be in, but he finds comfort in the shared experiences of other survivors. He also finds comfort in working to make sure all cancer survivors get the services they need, regardless of their ability to pay.

“I have seen how support groups help me,” says Reagan. “And people with cancer don’t have deep pockets. Journaling and other healing therapies and outdoor experiences can enhance our lives. I want to help cancer survivors get access to services they don’t have to pay for.”

And then there is Brady, the dog Reagan adopted before brain cancer was a part of his life. During treatments for his first tumor, Reagan says it was hard to get up each day and take the dog for a walk. But despite the difficulty, Reagan says that getting up and out was exactly what he needed — and he doesn’t underestimate the other healing properties and pure joy of man’s best friend.

“He’s a good listener,” says Reagan. “I walk him four to five miles a day which keeps me in some kind of shape. He’s reliable, he’s my caregiver, and he makes me laugh, which is great medicine.”