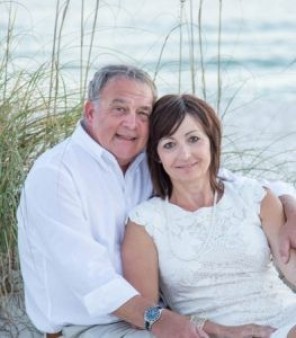 Terri and her husband, Johnny. CDC’s Division of Cancer Prevention and Control (DCPC)

I Did Everything to Avoid Cancer…And It Still Got Me

Terri, 61, had to re-evaluate her life when her mother was diagnosed with ovarian cancer in the late 1990s. Doctors thought for a long time that her mother’s condition was a bowel disorder, so when they found the cancer, it was at an advanced stage. Even though Terri’s mother went on to live for many more years, that ordeal was only the start of Terri’s own struggle.

Because ovarian cancer can run in families, Terri was examined by a specialist in gynecologic cancer every year. She also tried to keep a healthy weight, stay active, and eat healthy, which may help to lower the risk of getting several kinds of cancer. Both Terri and her mother had genetic counseling and were tested for mutations in the breast cancer susceptibility (BRCA) gene that can raise the risk for breast or ovarian cancer. Neither woman had these mutations.

But Terri didn’t let down her guard. She continued getting checkups. She was 56 years old when she noticed some unusual vaginal bleeding. After an ultrasound, her doctor saw a mass on one of her ovaries and a thickening in the lining of her uterus. Right away, the doctor recommended surgery to remove her uterus and ovaries. The surgery went well. The doctor thought the mass was likely to be a non-cancerous cyst, but sent tissue samples for tests.

A week later, the news came back: Terri had ovarian cancer. Worse, the tumor had spread, and cancer cells were in Terri’s pelvic area. It was not the same type of ovarian cancer her mother had. Instead, it was a very rare kind called granulosa cell cancer, or GCT, which grows more slowly than other ovarian cancers. Unfortunately, many medicines used to treat other types of ovarian cancer aren’t effective for GCT tumors.

“It took me a period of time to reconcile myself to the fact, as I’d always been a healthy person,” Terri says. “All of a sudden, I felt ill; I felt different from other people. And I questioned why this was happening to me.”

Between 2012 and 2016, Terri had several treatments, was part of a clinical treatment trial, took drugs that blocked certain proteins or certain hormones, and had two more operations to remove tumors. Like many cancer survivors, Terri faces a lifetime of checkups to make sure the cancer hasn’t come back.

“The reality at first is such a shock, and there’s a lot of denial,” says Terri. “But once I had accepted my situation, I realized, ‘I can do this. I can live with a chronic condition, and I can have a great life. And I do.’” For nearly a year now, doctors have not found any remaining or recurring cancer.

Now, Terri makes it her mission to help women who are at risk for or who have ovarian cancer. She leads a group that lets survivors talk to medical students about ovarian cancer and finding it early, and she goes to Washington D.C. to lobby for more funding for research. Less than half of women who get ovarian cancer live five years after diagnosis, and Terri has lost many friends on her journey. “I feel like I need to do this for them because they’re unable to advocate.”

Terri is also determined to live her life to the fullest. She has three children, three stepchildren, six grandchildren, and is an avid gardener and traveler with her husband. “I feel that it’s a life sentence, not a death sentence,” Terri says. “I have a whole lot of living to do even though I know the cancer might come back.”

One of the reasons Terri is alive today is that she recognized a symptom of ovarian cancer—unusual vaginal bleeding. CDC’s Inside Knowledge: Get the Facts About Gynecologic Cancer campaign urges women to learn the signs and symptoms and see a doctor if they have persistent and worsening symptoms that last for two weeks, or to talk to a doctor right away if they have unusual bleeding. Learn more about ovarian cancer and the signs and symptoms of the five main gynecologic cancers.

Courtesy of the CDC’s Division of Cancer Prevention and Control