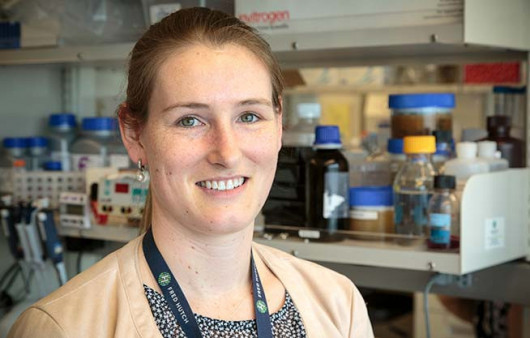 “We’re providing something no one else is offering, even for patients who have exhausted all other options,” said Margot Pont, PhD. Photo by Robert Hood / Fred Hutch News Service

Engineered immune cells get a helping hand in a new clinical trial for multiple myeloma patients.

They may not have made a dent against Alzheimer’s. But it turns out experimental drugs called gamma secretase inhibitors, or GSIs, sure can bedevil cancer.

A new study in the journal Blood describes how GSIs can reverse a crafty disappearing act that multiple myeloma pulls on the immune system. That ability to vanish even tricks T cells that are genetically programmed to home in on and attack myeloma cells.

But scientists at Fred Hutchinson Cancer Research Center have found that GSIs can disable cancer’s cloaking device. The drugs prevent myeloma cells from shedding a telltale sign that shouts “CANCER HERE.” Even better: The data shows that GSIs and engineered immune cells can form a potent one-two punch. Flushed back out into the open by the drugs, myeloma cells are easily spotted by CAR T cells, which can launch their attack.

The researchers have now launched a clinical trial to test this pairing. Their paper details promising — but early — results in three multiple myeloma patients, noted Margot Pont, PhD, a postdoctoral researcher at Fred Hutch and the lead scientist on the analysis.

But in the context of multiple myeloma — a blood cancer with no reliable cure, in which relapse remains virtually inevitable — the first-in-human trial offers a glimmer of hope, she said.

“We’re providing something no one else is offering, even for patients who have exhausted all other options,” said Pont, who presented the research at an immunotherapy conference in Paris. “It’s exciting to find that a drug that was developed for something else can work so well here.”

The combination strategy now being tested in the clinic grew out of two parallel, years-long research efforts at Fred Hutch.

BCMA is a protein that studs the surface of multiple myeloma cells. Riddell and his team began to develop T cells modified with chimeric antigen receptors, or CARs, that could sniff out BCMA. Green launched a promising clinical trial to test technology that grew out of this work in multiple myeloma patients.

But the researchers also knew that myeloma cells have a nasty habit of shedding BCMA. That doesn’t just make it difficult for CAR T cells to “see” cancer. The BCMA fragments end up in the bloodstream and act like decoys, potentially distracting the engineered immune cells and further reducing their effectiveness.

Myeloma cells slice BCMA from their surface by using an enzyme: gamma secretase. Inhibiting that enzyme at one point seemed like a potential strategy against Alzheimer’s. It wasn’t. (GSIs have also been tested against some cancers in clinical trials. They failed there, too.)

But Green read in a paper about the failed Alzheimer’s trials that the drugs seemed to have an impact on how much BCMA appeared on the surface of cells. That passing reference prompted him to study GSIs in parallel to his CAR T-building collaborative work with Riddell.

So, they didn’t just set out to build a BCMA-seeking missile. They wanted to give their missile a better target.

As the new paper shows, the strategy seems to be paying off. Administering these drugs to patients increased the amount of BCMA on myeloma cells up to 157-fold.

And while it appeared to be helping CAR T cells here, other BCMA-directed immunotherapies being developed at Fred Hutch and elsewhere could also benefit from measures that manipulate the target and make it more attractive, Green noted.

Green cautioned that the research, while promising, is still early.

“We’re seeing patients potentially benefiting from this already, but we need to follow them for the long term to determine the impact of this translation on disease,” he said. “Still, this paper shows that we can manipulate the target and improve the efficacy of CAR T cells. It is tremendously exciting to demonstrate that this approach can work in the clinic.”

This research was supported by a gift from Bard Richmond; grants from the National Institutes of Health and Multiple Myeloma Opportunities in Research and Education; and research funding from Juno Therapeutics, a Celgene company.

Competing Interests: Green, Riddell and Dr. Tyler Hill have filed a patent covering applications of GSI for cellular therapy. Green and Dr. Andrew Cowan have received research funding from Juno Therapeutics, a Celgene company. Riddell is a founder of Juno.

Note: Scientists at Fred Hutch played a role in developing these discoveries, and Fred Hutch and certain of its scientists may benefit financially from this work in the future.

This article was originally published on September 26, 2019, by Hutch News. It is republished with permission.