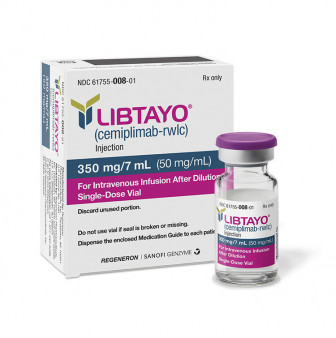 The Food and Drug Administration (FDA) this week gave the green light to Libtayo (cemiplimab-rwlc), the third approved PD-1 checkpoint inhibitor and the first therapy specifically approved for metastatic or locally advanced cutaneous squamous cell carcinoma (CSCC) that cannot be cured with surgery or radiation therapy.

Squamous cell skin cancer is the second most common cancer in the United States (after basal cell skin cancer), with an estimated 700,000 new cases diagnosed annually, according to the FDA. CSCC is usually curable with surgery if detected early, but if left untreated, it can spread to the deep layers of the skin, lymph nodes and organs elsewhere in the body, a process known as metastasis. About 7,000 people die from CSCC each year.

“We’re continuing to see a shift in oncology toward identifying and developing drugs aimed at a specific molecular target. With the Libtayo approval, the FDA has approved six immune checkpoint inhibitors targeting the PD-1/PD-L1 pathway for treating a variety of tumors, from bladder to head and neck cancer and now advanced CSCC,” said Richard Pazdur, MD, director of the FDA’s Oncology Center of Excellence. “This type of cancer can be difficult to treat effectively when it is advanced, and it is important that we continue to bring new treatment options to patients.”

Libtayo, from Regeneron and Sanofi, is a type of immunotherapy that helps the immune system fight cancer. It is a monoclonal antibody that blocks PD-1, a checkpoint receptor on T cells that plays a role in regulating immune function. Some tumors can hijack PD-1 to turn off immune responses against them. Drugs that block the interaction between PD-1 and its binding partner, known as PD-L1, can release the brakes and restore T-cell activity.

Libtayo received FDA priority review status and a breakthrough therapy designation, intended to speed up approval for therapies that have the potential to substantially improve the treatment of serious or life-threatening conditions.

Libtayo is administered as an IV infusion once every three weeks until disease progression or unacceptable side effects occur. The list price will be $9,100 per infusion, according to a Regeneron/Sanofi press release. The companies have started the Libtayo Surround patients assistance program to help people pay for treatment.

Approval of Libtayo was based on results from two clinical trials—the Phase II EMPOWER study and an earlier Phase I trial—that together enrolled 33 people with locally advanced CSCC and 75 people with metastatic CSCC. The results were presented in part at this year’s American Society of Clinical Oncology annual meeting in June and published in The New England Journal of Medicine.

The combined overall response rate, meaning complete or partial tumor shrinkage, was 47 percent. Four percent of patients, all with metastatic disease, saw complete responses. The duration of response ranged from one to more than 15 months, and 61 percent of participants had responses lasting at least six months.

A concern with checkpoint inhibitors is immune-related adverse events. In addition to restoring immune responses against cancer, these drugs can also take the brakes off the immune system more broadly, causing it to attack healthy tissue. This can lead to excessive inflammation of organs including the lungs (pneumonitis), heart (myocarditis), intestines (colitis), liver (hepatitis) and hormone-producing endocrine glands.

This week’s approval covers only this specific skin cancer, but PD-1 checkpoint inhibitors have shown good results for many other types of cancer. Keytruda and Opdivo are approved for melanoma, some types of lymphoma, bladder, head and neck, lung and other cancers. Libtayo is currently being studied for cervical, lung, ovarian and prostate cancers, multiple myeloma and glioblastoma brain cancer, among others.