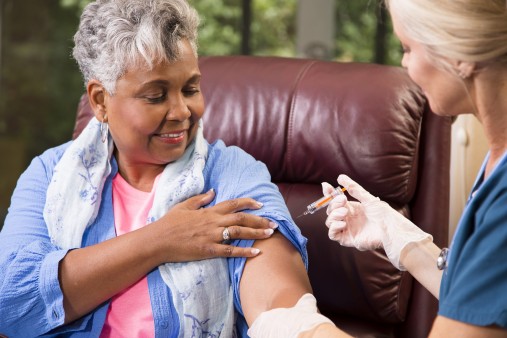 It’s not too late to get a flu shot—and if you haven’t already, get one soon. Istock (Models used for illustrative purposes only)

It’s bad out there. Here are 7 things you need to know to protect yourself—and others.

Flu is miserable enough for someone who is otherwise healthy. It can be devastating for people whose immune systems have been weakened by cancer or treatment or both.

With flu dominating the headlines, we asked two infectious disease specialists at Fred Hutchinson Cancer Research Center how cancer and other immunocompromised patients can protect themselves from infection and what they should do if they get sick.

Here are seven things you should know—whether you are the person with cancer or anyone in that person’s orbit. (Yes, family members, friends, co-workers and care providers with healthy immune systems can take steps to protect those without.)

1. Flu is always serious, and this year’s dominant strain is known for being especially severe.

Although there is no such thing as a good flu season, some are worse than others. This one falls into the worse category. The latest numbers from the U.S. Centers for Disease Control and Prevention show that this is shaping up to be the worst season in a decade.

The culprit appears to be the dominant influenza virus subtype circulating this season, which is an H3N2 strain. Historically, H3N2 causes more complications, especially in the elderly, young children and people with chronic health conditions.

“H3N2 is notoriously related to severity,” said Fred Hutch infectious disease researcher Steve Pergam, MD, MPH, who is also medical director of infection prevention at the Hutch’s clinical care partner, Seattle Cancer Care Alliance. “We don’t entirely understand the biology of why that is, but compared to other strains, H3N2 seasons tend to be worse.”

In addition, vaccine effectiveness tends to be lower against H3N2 than against H1N1 and influenza B strains. Even in good years, vaccines are seldom more than 50 to 60 percent effective because influenza mutates so rapidly. Data from Canada so far suggest that the vaccine this year may be about 17 percent effective against circulating H3N2 viruses.

The CDC recommends annual influenza vaccinations beginning at 6 months of age. But given the low effectiveness this year, is it even worthwhile?

2. Even a partially effective flu shot provides some protection—and can lessen flu’s severity if you do get sick.

One of many stubborn myths about flu vaccination is that a shot can give you the flu. In fact, the opposite is true. Not only is some protection better than no protection, being vaccinated may shorten the course and lessen the severity of your illness should you get infected.

“Even if it’s not 100 percent effective at preventing you from getting the flu, getting a flu vaccine decreases the chances that you go on to develop severe illness,” said Pergam. “It can help prevent major complications.”

That can be huge. According to the CDC, about 80 to 85 percent of children who died from flu in past years were not vaccinated.

Pergam pointed out yet another reason to get a flu shot: Multiple strains of influenza virus circulate in any given season, and each year’s vaccine is designed to protect against the three to four variants that scientists believe will be most common. So a vaccine that is not very protective against one strain may be more protective against another.

It’s not too late to get a flu shot. Flu season, although likely peaking soon, can last until May. But if you haven’t already done so, do it soon, as it takes about two weeks for the immune system to produce protective antibodies.

And that raises another question. Since vaccines work by teaching the immune system to respond to a pathogen, will they work if your immune system itself is weakened or suppressed by cancer or treatment?

Flu shots may not work as well for the immunocompromised, but they still help, said Pergam.

“Anyone who is immune-suppressed or takes medications that are immunosuppressing should speak to their doctor about getting a flu vaccine,” he said. “I would highly recommend that they get a flu vaccine if their physician thinks it’s appropriate.”

A National Institutes of Health–funded clinical trial is underway now to see if a high-dose vaccine may offer better protection to people whose immune systems are suppressed by disease or treatment. Age also dampens the immune system, and a higher-dose vaccine already is available for people over age 65.

Alas, there are no shortcuts to boosting the immune system beyond adhering to a healthy lifestyle: Eat healthily, exercise and get enough sleep.

That said, there are additional steps you can take to protect yourself from infection. Beyond flu vaccinations all around, Pergam encourages his immunosuppressed patients to avoid crowded places during flu season.

“It doesn’t mean you can’t live your life normally, but just be thoughtful about it,” he said. “If you’re going out to dinner, try to pick a time that maybe doesn’t have the highest number of people there.”

One more important way to protect yourself—and this cannot be said enough—is to wash your hands more often than Lady Macbeth.

5. People with weakened immune systems may not have typical flu symptoms, so be extra vigilant.

Think flu, and you think fever, cough, muscle aches and overall misery. But that’s not always how flu presents itself in people with weakened immune systems.

“Their symptoms can be much more muted,” said Catherine Liu, MD, director of antimicrobial stewardship at Fred Hutch and SCCA. “They may have just a little runny nose, a mild cough or shortness of breath. Because their immune system is suppressed, they may not actually present with more severe symptoms like fever and body aches until the disease has progressed substantially.”

This may sound counterintuitive, but it makes sense when you realize that flu symptoms are not caused by the virus itself but by the immune system’s response to the virus. A weakened immune system simply mounts a milder response. But the flu itself is still deadly serious.

So in addition to taking steps to protect yourself, patients with weakened immune systems need to have what Liu calls “a low index of suspicion.” Don’t be embarrassed to ask your doctor about a runny nose. And don’t try to tough it out.

“If you are immunosuppressed, be cognizant of any changes in your body, and get yourself evaluated if there’s a change that might be suggestive of respiratory symptoms,” she said. “Be aware any time you think you’re coming down with something. There are things we can do to try to prevent it from being worse.”

What health care providers can do for the flu is prescribe the antiviral drug Tamiflu, or oseltamivir, especially for people with chronic health conditions or cancer or for transplant patients at risk for complications. The benefit is greatest when started as soon as possible after the onset of symptoms—another reason to be extra vigilant about even a runny nose.

“Treatment isn’t perfect,” said Pergam. “But there’s no question it can help mitigate the symptoms and potentially prevent you from getting worse. We encourage everyone who’s immune-compromised who develops anything that could be early flu to get tested and treated.”

While an antiviral therapy such as oseltamivir will help, antibiotics—which treat bacterial infections—will not.

Yet because patients may be more familiar with antibiotics than antivirals, they often ask for antibiotics and their doctors often feel pressured to prescribe them. Any use of antibiotic raises the risk that bacteria will develop resistance, meaning that antibiotics won’t work when they truly are needed.

Antibiotics also can upset the balance among the trillions of microorganisms that make up your gut microbiome, killing off good bacteria and allowing bad bugs to take over. And researchers are learning that the microbiome itself affects immune response.

So, get tested, and if no bacterial infection is present, ask for antiviral therapy, not an antibiotic.

Beyond that, the prescription for flu is the same whether your immune system is at full strength or not, Pergam said.

7. Even if you are not immune-suppressed, protect those who are: Get the flu vaccine. Clean your hands. Stay home if you’re sick.

So your immune system is healthy? You still can get the flu. And you can spread it to those who are more vulnerable to its complications.

Not only should those with weakened immune systems get flu shots, their families and caregivers should too.

“The more you can do to prevent disease to people who are close to the patient, the lower the chance of exposure,” said Liu. “That’s really key.”

Now add those with kidney, heart and lung disease and asthma. At higher risk still are people who have had organ transplants and are on lifelong immune-suppressing drugs to keep their bodies from rejecting their new heart, kidney or liver. Cancer patients on chemotherapy may be more susceptible to infections even months after treatment has ended. At highest risk are bone marrow transplant patients whose immune systems have been deliberately wiped out to make room for a new one to take hold.

Because many of these lifesaving but immune-dampening therapies are delivered in outpatient clinics, vulnerable people are “walking around the community and getting exposed to flu and other infections,” said Pergam. Even if you are not one of them—even if you don’t know who they are—getting a flu shot helps reduce transmission routes that put them at risk.

“The more you can protect the entire population, the more likely you’re going to reduce the chance of transmission to those who are immune-compromised and more vulnerable,” said Liu.

In summary, what can you do if you have a healthy immune system?

“Get a flu shot. That’s number one,” said Liu. “Number two, if you’re sick, visit your loved one another time. Stay home when you’re sick. Clean your hands. Try to minimize that exposure.”

This article was originally published on February 6, 2018, by Hutch News. It is republished with permission.