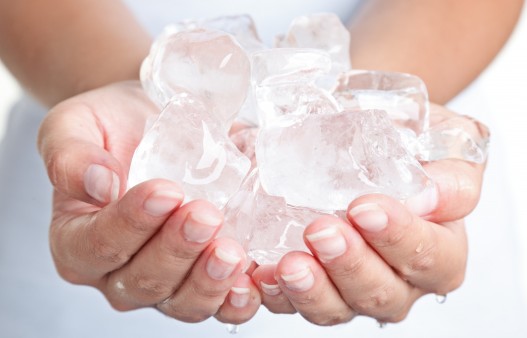 Frozen Gloves and Socks May Ease Side Effects of Chemo

Women who wore chilled gloves and socks during chemotherapy were less likely to have reduced sensations and dexterity related to nerve damage in their hands and feet, according to a recent report in the Journal of the National Cancer Institute.

The researchers concluded that cyrotherapy using gloves and socks containing a frozen gel is a simple, safe and effective strategy for preventing chemotherapy-induced peripheral neuropathy during cancer treatment.

Peripheral neuropathy, or nerve damage in the extremities, is a potential side effect of many drugs including paclitaxel (Taxol and generic versions), a widely used treatment for breast cancer and several other cancers. It can cause pain, tingling and numbness in the hands and feet and in severe cases can interfere with walking. Some people reduce their drug doses or stop treatment early for this reason.

Cryotherapy or hypothermia—treatment that involves chilling or freezing—may reduce the side effects of chemotherapy by restricting blood flow to the hands and feet, which limits how much of the drug reaches these areas. A similar principle underlies scalp cooling, which has been shown to reduce hair loss during chemotherapy.

Akiko Hanai of Kyoto University and her colleagues studied peripheral neuropathy prevention in 40 women receiving paclitaxel for breast cancer. The average age was 56. The women wore Elasto-Gel frozen gloves and socks on their hands and feet on one side of their body and nothing on the other and thus served as their own controls.

The women received weekly one-hour chemotherapy infusions for at least 12 weeks and wore the gloves and socks for 90 minutes per session, starting 15 minutes before and ending 15 minutes after treatment. Four patients did not complete treatment and were excluded from the analysis.

The researchers looked at changes in tactile sensation, tested by poking the skin with monofilament fishing line. They also assessed sensitivity to heat or cold, ability to feel vibrations and manual dexterity speed. They asked participants about discomfort while wearing the frozen gloves and socks and had them complete questionnaires about neuropathy symptoms and how much they interfered with daily activities. Finally, they measured the electrophysiological activity of nerves in the hands and feet.

None of the women dropped out of the study due to cold intolerance while wearing the frozen socks and gloves. Objective (based on test results) and subjective (patient-reported) signs of peripheral neuropathy were significantly reduced on the side that wore the gloves and socks, meaning the differences were probably not the result of chance.

For example, 28 percent of the women had reduced tactile sensation in the hands that wore frozen gloves compared with 81 percent in the hands that did not wear the gloves. Similarly, 25 percent had reduced tactile sensation in the feet that wore frozen socks versus 64 percent in the feet that did not wear the socks. Manual dexterity speed was faster on the side that wore the gloves and socks. There was no significant difference in electrophysiological signs of nerve damage.

The women reported that neuropathy symptoms occurred less often, and developed later, on the side that wore the frozen gloves and socks. Only 3 percent said they had severe hand symptoms on the glove side, compared with 42 percent on the control side.

“Cyrotherapy could support the delivery of optimal chemotherapy by preventing a dose delay or reduction, as well as inhibiting the deterioration of quality of life in cancer patients during and after treatment,” the researchers concluded.