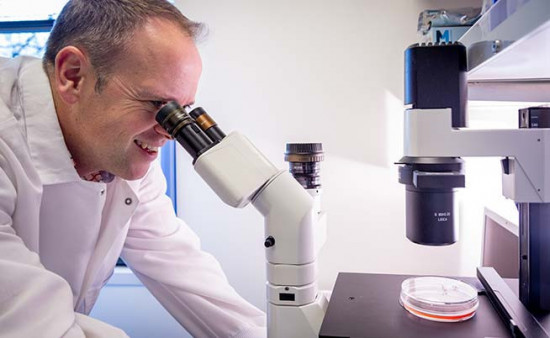 For years, leukemia doctors have been plagued by a toxic trade-off: A bull’s-eye for certain cancer-killing drugs also appears on some normal blood stem cells. Hitting the mark means harming healthy and diseased cells alike.

Scientists at Fred Hutchinson Cancer Research Center want to get rid of that trade-off altogether. Their strategy: remove the bull’s-eye from normal cells while leaving the target exposed on cancerous ones.

On December 9, 2019, two Fred Hutch teams reported initial results from the latest chapter of their ongoing research. Using the gene-editing tool CRISPR, the researchers snipped the bull’s-eye — a tiny bit of protein called CD33 — from human blood stem cells and transplanted them in mice. Then, they used an experimental immunotherapy drug called a bispecific antibody that roused the immune system to wipe out acute myeloid leukemia tumor cells while sparing the edited cells.

Those early results, presented at the annual meeting of the American Society of Hematology, suggest their editing strategy might someday help improve treatment for people with AML, said Olivier Humbert, PhD, a staff scientist in the lab of Hans-Peter Kiem, MD, PhD, at Fred Hutch.

“Most drugs that target CD33 cause severe toxicity because they also target normal cells,” Humbert said. “Using CRISPR to protect these cells could help broaden the use of CD33-directed immunotherapies against AML.”

To a cancer patient, it’s a match made in heaven: A tumor-fighting T cell meets a diseased cell. A volatile marriage ensues.

But sometimes those two parties need a nudge to get together. Scientists have created a molecular matchmaker to do that: A class of drugs called bispecific antibodies.

“You can think of a bispecific antibody as a bridge between two things that otherwise would not interact,” said George Laszlo, PhD, a staff scientist in the lab of Roland Walter, MD, PhD, at Fred Hutch. “And in this case, the molecule is something of a magic glue that leads to T cells killing cancer cells.”

As the term “bispecific" implies, these antibodies take hold of two targets at once. This study used a bispecific molecule that latches onto CD33 as well as a common protein found on T cells called CD3.

The two research teams decided this CD33/CD3 bispecific antibody would be a good candidate to further test their CRISPR approach. Earlier in 2019 they published a paper that showed how gene-edited stem cells were protected from another CD33-targeting drug. (That drug, gemtuzumab ozogamicin, has roots at Fred Hutch that stretch back decades.)

In this study, Humbert again used CRISPR to strip normal human blood stem cells of CD33. He then transplanted the edited blood stem cells into special mice, where the cells took root and spawned a healthy human immune system. (Kiem’s team developed this mouse model a few years ago as a testing ground for immunotherapies.)

The researchers then infused the mice with AML cells. For five consecutive days, the CD33/CD3 bispecific antibody was delivered intravenously into the mice. Within five days, it had eliminated the cancer cells. The edited blood stem cells stayed safe during the attack and continued to generate a healthy immune system. In other words, the genetically modified cells functioned like normal ones.

The Kiem Lab has previously translated this gene-modification-as-protection approach into the clinic. The results were promising for patients with a type of deadly brain cancer. The teams now hope to bring this strategy — along with the latest immunotherapies — to patients with AML, who often face the specter of relapse after treatment.

Laszlo and Walter will continue to study CD33-targeting bispecific antibodies as a way to treat cancer. Meanwhile, Humbert plans to test his CRISPR strategy with other immunotherapy drugs, including engineered immune cells that target CD33.

“Our plan is to investigate as many drugs that target CD33 as possible,” he said. “We don’t know which one is going to be the most beneficial, so we’re going to keep our options open.”

This article was originally published on December 9, 2019, by Hutch News. It is republished with permission.