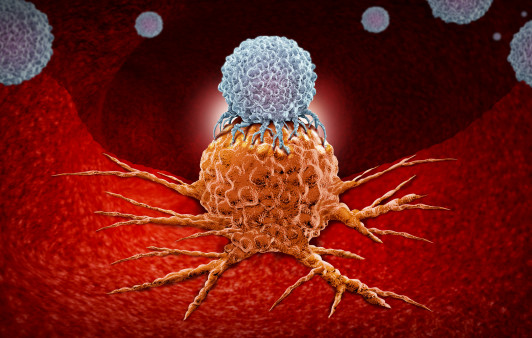 More than two-thirds of people with an advanced form of a rare skin cancer are on track to survive at least two years after starting an immunotherapy drug on a landmark clinical trial, researchers reported on February 6 in the Journal of Clinical Oncology.

That’s a profound shift for this deadly cancer, Merkel cell carcinoma, or MCC. Just a few years ago, patients with advanced MCC would invariably receive chemotherapy, the previous standard of care. As many as three-quarters of them would die within that two-year time frame, previous studies have shown.

The investigators are “thrilled” that so many of the trial participants are doing so well compared to what historical data would predict, said Martin “Mac” Cheever, MD, of Fred Hutchinson Cancer Research Center, one of the leaders of this first-of-its-kind study.

The multisite trial tested an immune-boosting drug called pembrolizumab (Keytruda), also known as a checkpoint inhibitor because it blocks a checkpoint — brakes, essentially — that keep the immune system from mounting a cancer-killing response. (Read more about this clinical trial in these stories from 2018 and 2016.)

Fifty patients enrolled on the trial, which was not randomized. After receiving pembrolizumab, 28 saw their cancers shrink or even disappear — an unusually high rate of response for a solid-tumor cancer, Cheever said. For almost all of these patients, the results were holding two years after their first dose of the drug, the researchers reported. Based on their results to date, the research team calculated a two-year survival rate of more than 68 percent.

The drug is not without risks. In their most recent report, the scientists wrote that the trial drug likely contributed to severe side effects in 14 of the 50 patients, including one death.

This trial has already had a major impact on the care of patients with MCC. The U.S. Food and Drug Administration approved pembrolizumab for MCC in December 2018 based on the strength of its results. But the drug has been a standard of care for patients with MCC since 2015, when experts rewrote medical guidelines after the trial’s first preliminary results came out.

As noteworthy as the findings have been, Cheever said, “It’s the beginning, not the end.”

“We’re also coming up with a lot of information that will help design future trials for this disease and do even better in the future,” Cheever said. He noted that at least four pharmaceutical companies are now developing drugs for this once-neglected disease. “It’s really stimulated a lot more research in the disease and will result in better therapies as time goes on.”

The trial was conducted at 13 sites nationwide through the Cancer Immunotherapy Trials Network, a federally funded national research group headquartered at Fred Hutch and led by Cheever. The trial was initiated by Cheever and principal investigator Paul Nghiem, MD, PhD, head of dermatology at the University of Washington and a Fred Hutch faculty affiliate. Another trial leader was Suzanne Topalian, MD, of Johns Hopkins Kimmel Cancer Center.

The trial was funded by the National Institutes of Health, private donors, the Prostate Cancer Foundation and Merck.

This article was originally published on February 6, 2019, by Hutch News. It is republished with permission.