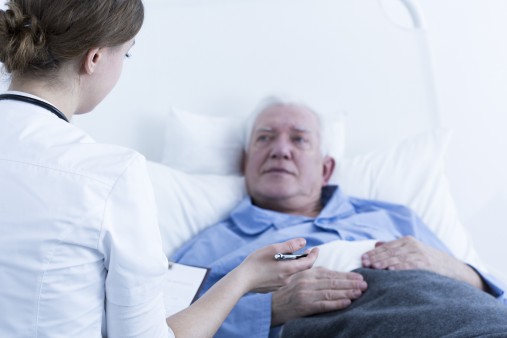 Hospice workers and patients alike should ensure they have advanced directives in place. Istock (Model(s) used for illustrative purposes only)

A survey of nearly 900 health care workers at a nonprofit Florida hospice found that fewer than half—just 44 percent—had completed advance directives. Of the rest, 52 percent said they had not filled out the forms that specify choices about medical care. Nearly 4 percent said they weren’t sure if they had or not.

That surprised Dr. George Luck, a palliative medicine expert at the Charles E. Schmidt College of Medicine at Florida Atlantic University, who led the research.

Although the proportion is higher than the roughly one-third of Americans overall who have advance directives in place, Luck expected more from those who work with the dying.

“I expected people who work in a hospice setting, who see what happens when someone doesn’t have an advance directive, how that can be a struggle for the family, a bigger burden,” to be better prepared, said Luck. The report was published last month in the American Journal of Medicine.

Equally surprising was that about 10 percent of hospice workers without directives said they didn’t know where to obtain the forms—which are widely available online. Another nearly 6 percent said cost was a barrier, even though the documents can be completed for free, without an attorney’s help.

“I don’t expect everybody to have an advance directive, but at least know the basics,” Luck said. “Basically, you could write it on a napkin if you wanted to.”

About 7 percent of workers said fear of the subject kept them from completing directives, he said.

Luck and his colleagues sent surveys last year to nearly 2,100 workers at Trustbridge, a hospice in Boca Raton, Fla., that serves about 2,000 patients. The 890 people who responded included doctors, nurses, clergy, office staff, volunteers and others.

Whether they had completed advance directives varied by ethnicity and age. Nearly 60 percent of white employees had filled out the documents, compared with about 30 percent of Hispanics, 22 percent of African-Americans and 14 percent of Asians, the study showed.

Doctors and volunteers were most likely to have advance directives, with almost 60 percent saying they had documents in place, compared with about 20 percent of certified nursing assistants.

That was probably related to age, Luck said. Doctors and volunteers tended to be older than the CNAs. Nearly 80 percent of workers older than 65 had filled out the forms, compared with about 25 percent of those 40 and younger.

It didn’t appear to matter whether workers cared directly for dying patients. About 46 percent of those who spent more than 75 percent of their time in hands-on care had directives, about the same as those with no patient interaction.

Although the proportion of Americans overall who put their wishes in writing is low, it’s getting better. In 1990, just 16 percent of those who responded to a Pew Research Center study had completed directives. By 2013, that figure rose to 35 percent.

Still, the new report underscores the reluctance of many people to address their own mortality, said Jon Radulovic, a spokesman for the National Hospice and Palliative Care Organization (NHPCO).

“It’s a reminder that hospice professionals, despite the fact that they deal with death and dying among the patients and families they care for, are still people who don’t really think their deaths might be imminent,” Radulovic said in an email.

Anyone can fill out an advance directive, said Luck. Once completed, the forms can be shared with caregivers and kept with important documents. An NHPCO program called CaringInfo.org, offers free, state-specific advance directive forms, plus a guide for having end-of-life conversations.

Better education is the key, Luck said. And it’s possible that hospice workers may just need a nudge. After the Florida staff members took his survey, 43 percent of those without documents said they intended to fill out the forms.

This article was originally published on November 7, 2017, by Kaiser Health News. It is republished with permission.