Multiple immune cell types must be present in tumors for checkpoint inhibitor therapies to be effective.

In a new study published online June 25, 2018 in Nature Medicine, University of California San Francisco researchers have identified a key biological pathway in human cancer patients that appears to prime the immune system for a successful response to immunotherapy drugs known as checkpoint inhibitors. The findings, including initial observations from human tumor samples, mechanistic studies in mouse models, then confirmation in additional patient samples, could better enable clinicians to predict which patients will naturally benefit from these promising new treatments, and potentially to modify the immune response in other patients to allow more people to benefit from these therapies.

Cancers are often able to evade the immune system by activating the “brakes” built into T cells that normally prevent them from attacking the body’s own tissues. By cutting these brakes, checkpoint inhibitor drugs can “wake up” the immune system to the threat of these cancers and has successfully eliminated malignancies in about 20-40 percent of patients with melanoma and certain other cancer types. In the best cases, awakened T cells continue to patrol the body and prevent the cancer from ever coming back. But in the majority of patients, immunotherapies fail to have their intended effect—even with their brakes removed, T cells stay asleep and the cancer continues to spread. 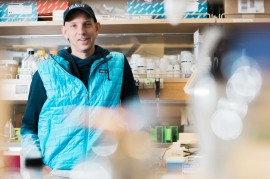 Matthew “Max” Krummel, PhD, a professor of pathology, member of the UCSF Helen Diller Family Comprehensive Cancer Center, and co-inventor of one of the leading forms of immunotherapy, believes the answer may lie in understanding the broader community of immune cells that occupy the tissue surrounding a tumor, such as the dendritic cells that guide T cells to their targets or the natural killer cells that act as first responders to detect and kill cancer cells before T cells arrive.

“If you want to stimulate T cells to attack cancer, do you need to recruit any specific allies in the tumor first?” Krummel asked. “We didn’t know who were the good and bad partners within the immune system, so we began systematically taking apart tumors and asking of every cell type that was in it, ‘Can you activate T cells?’”

In 2014, Krummel’s lab discovered a special class of dendritic cell in mouse tumors that appeared to play a critical role in stimulating T cells to fight cancer, which the lab dubbed “stimulatory dendritic cells” (SDCs). The researchers found that in mouse tumors without SDCs, T cells were unable to respond effectively to checkpoint inhibitors, and that human patients with low tumor SDC levels also had poorer clinical outcomes. But the researchers still needed to understand why only some tumors contained these protective SDCs, while others didn’t.

In the new study, which was led by postdoctoral researcher Kevin Barry, PhD, Krummel’s team first demonstrated – using publicly available melanoma genomics data from The Cancer Genome Atlas (TCGA) and tissue samples from clinical collaborators at UCSF – that the number of SDCs in human melanoma tumors predicted improved response to immunotherapy and overall survival, as they had seen in mice.

To begin to tease out the factors that could explain why some patients had more SDCs than others, the researchers broke down tumor samples into their constituent cells and looked for differences in gene expression in tumors with high SDC counts. They found that expression of a specific immune signaling protein, or cytokine, called FLT3LG strongly correlated with the presence of SDCs. Further examination of mouse and human tumor samples showed that FLT3LG is expressed by another class of immune cells called natural killer (NK) cells, and experiments in mouse tumors revealed that these NK cells appear to make contact with SDCs and directly control how many are present in the tumor.

“One of the fascinating discoveries here is that we’ve long known that natural killer cells—as their name implies—can also kill cancer cells directly,” Krummel said. “But here we are discovering that their power doesn’t lie just in their ability to eliminate threats, but also in their ability to communicate with other immune cells. We could directly see the NK cells coming and cozying up and appearing to deliver cytokines to SDCs very discretely and selectively.”

These findings suggested that activation of NK cells in patient tumors could recruit SDCs and prime patients to respond more robustly to immunotherapies. To test this hypothesis, the researchers analyzed human tumor samples provided by their clinical collaborators for the presence of NK cells, and found that the presence of NK cells in tumors was correlated with elevated numbers of protective SDCs, as well as long-term patient responsiveness to immunotherapies known as anti-PD-1 drugs, and to overall patient survival.

“This was very exciting because there are currently examples of new immunotherapies targeting NK cells being tested in the clinic,” Barry said. “If you could successfully find a way to increase NK cells in patients’ tumors, that could be a way to boost SDC levels and produce better responses to current immunotherapies.”

Another potential application of the new findings, Barry says, would be to use the presence of NK cells and SDCs as a biomarker to identify patients who are naturally most likely to respond to immunotherapy. “Ultimately, we would like to know if the presence of these cells in tumors can be detected in the blood,” he said. “Currently we depend on biopsies or surgically removed tumor samples, but if we could find correlates in the blood, it would make for really useful clinical tool to identify patients who are likely to have a great response to immunotherapy.”

The research was enabled by close collaborations with clinical colleagues who provided key melanoma tissue samples analyzed in the study as part of the UCSF Immunoprofiler consortium, an ambitious initiative founded by Krummel, in collaboration with pharmaceutical giants AbbVie, Amgen, and Bristol-Myers Squibb, to analyze immunological profiles of hundreds of tumor samples from more than 10 different forms of cancer.

In future, Krummel hopes to extend this project not only to understand how communities of immune cells differ between mild and aggressive tumors or those that respond well or poorly to certain treatments, but also as part of an ambitious effort to profile the full dynamic range of the immune system across the body in healthy and diseased states.

“There are patterns to the immune system—it’s not just a random assortment of independent cells.” Krummel said. “It’s exciting to reveal a cellular partnership associated with patients who have positive responses to therapy, because it tells us more about what a healthy immune community looks like, which in turn gets us closer to the root causes of health and disease. Every turn we take gets us closer to the heart of the maze.”

UCSF Health clinical collaborators on the current study (all of whom are members of the UCSF Cancer Center) included Adil Daud, MD, the HS Clinical Professor of Medicine in the Division of Hematology and Oncology and Director of Melanoma Clinical Research for the Cancer Center, and Michael Alvarado, MD, an associate professor of surgery, who provided melanoma samples used in the study. In addition, Patrick Ha, MD, Distinguished Professor in the UCSF Department of Otolaryngology, and William Ryan, MD, an assistant professor of otolaryngology, provided supplementary samples of head and neck cancers, in which the study authors also found the abundance of NK and SDC cells to be predictive of successful immunotherapy response.

This work was supported by the U.S. National Institutes of Health (NIH) grant R01CA197363, awarded to M.F.K. Acquisition and processing of human melanoma samples described in this study was funded in part by contributions from AbbVie, Amgen, and Bristol-Myers Squibb as members of the Immunoprofiler Consortium. Further support came from NIH grant 5P30CA082103, awarded to the UCSF Helen Diller Family Comprehensive Cancer Center. M.B. was supported by the Genentech Predoctoral Research Fellowship, the Margaret A. Cunningham Immune Mechanisms in Cancer Research Fellowship Award, and the Achievement Reward for College Scientists Scholarship. K.B. was supported by a postdoctoral fellowship from the Cancer Research Institute and Fibrolamellar Cancer Foundation.

Krummel is a founder and Pollack is an employee of Pionyr Therapeutics.

This article originally appeared on the UCSF website on June 25, 2018. It is reprinted here with permission.