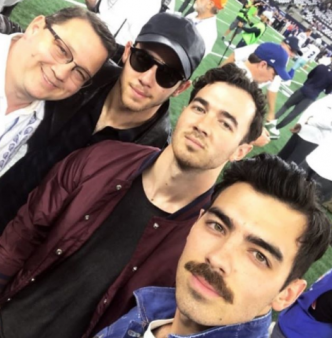 Kevin Jonas Sr., who battled colon cancer, worries that his four sons could be diagnosed with the disease.

Kevin Jonas Sr. is best known as the father of Nick, Kevin and Joe Jonas, the siblings who rose to fame as the band Jonas Brothers in 2005. But now, the spotlight has shifted to Jonas Sr., who was diagnosed with colon cancer last year and is currently in remission, reports PEOPLE.

In March 2017, at age 52, Jonas received his first colonoscopy, during which doctors found a large mass in his colon. (Doctors recommend that annual screenings begin at age 50.)

“My entire life really flashed in front of me,” Jonas told PEOPLE exclusively. “In that moment, I thought, Have I lived a good life? Have I been good to my kids and my wife? Have I done right by people?”

Three weeks later, Jonas underwent surgery to remove the mass and doctors discovered that Jonas had been living with Stage 2 colon cancer.

As he underwent six weeks of chemotherapy and endured various complications from surgery, he had the support of his family. His wife, Denise, and his sons, including 17-year-old “Bonus Jonas” Frankie, were by his side every step of the way.

On December 22, doctors officially declared Jonas to be in remission.

Jonas is now raising awareness of colon cancer as the new spokesperson for Fight Colorectal Cancer, a national advocacy organization that educates people on the importance of early detection through screening.

“I want everyone to be tested as early as possible,” Jonas said. “People’s lives can be saved, but waiting could cost you everything. If just one person ends up like me and catches their cancer before it’s life-ending, then I’ve been a part of something good.”

He also wants his sons to get screened sooner rather than later, reports PEOPLE, because a family history of colon cancer increases a person’s risk of developing the disease. According to Fight CRC, family members of a survivor should be screened 10 years prior to the survivor’s age of diagnosis.