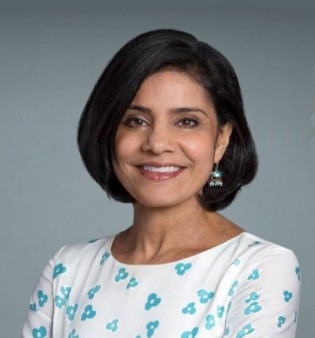 First-line combination therapy lowered the risk of death by 51 percent.

Adding the checkpoint inhibitor Keytruda (pembrolizumab) to chemotherapy for people with newly diagnosed non-small-cell lung cancer (NSCLC) delayed disease progression and improved overall survival, according to a report at the American Association for Cancer Research (AACR) annual meeting this month in Chicago.

Results from Merck’s Phase III KEYNOTE-189 study showed that people who used Keytruda, Alimta (pemetrexed) and platinum chemotherapy for first-time treatment saw their risk of death reduced by about half and disease progression delayed by about four months.

“Results from KEYNOTE-189 are practice-changing,” said lead researcher Leena Gandhi, MD, PhD, of NYU Langone Health Perlmutter Cancer Center. “This Phase III trial demonstrated an improvement in overall response rate, progression-free survival and overall survival across all groups of patients, irrespective of PD-L1 expression, halving the risk of death, which is an unprecedented effect of therapy in the first-line setting for advanced nonsquamous NSCLC without EGFR or ALK alterations.”

Non-small-cell lung cancer, which accounts for more than 80 percent of all lung cancers, is often detected at a late stage and has a high mortality rate. Lung cancer is the leading cause of cancer-related death for both men and women in the United States, according to the National Cancer Institute.

Keytruda blocks the PD-1 receptor, an immune checkpoint on T cells that plays a role in regulating immune function. Some tumors can hijack PD-1 to turn off immune responses against them. Drugs that block the interaction between PD-1 and its binding partner PD-L1 can release the brakes and restore T-cell activity.

Keytruda is currently approved by the Food and Drug Administration (FDA) as first-line therapy for people with metastatic lung cancer with high PD-L1 expression (50 percent or higher) and for those with PD-L1 positive tumors (1 percent or higher) who experience disease progression despite platinum-based chemotherapy. The drug received accelerated FDA approval for the indication studied in KEYNOTE-189, based on data from an earlier Phase II trial; these new results provide support for full traditional approval.

KEYNOTE-189 included 616 people with metastatic (spread beyond the lungs) nonsquamous NSCLC in Europe, North America and Asia. About 60 percent were men, and the median age was approximately 65; 12 percent had never smoked.

Eligible participants had not received prior treatment for metastatic disease and did not have EGFR (epidermal growth factor receptor) or ALK (anaplastic lymphoma kinase) gene mutations. These mutations offer opportunities for targeted therapy, and those without them are harder to treat. Participants were stratified according to PD-L1 levels. Researchers hypothesize that higher PD-L1 levels should help PD-1 inhibitors work better, although this has not been confirmed in several studies.

Participants were randomly assigned to receive either Keytruda or placebo injections in addition to Alimta (a chemotherapy drug that interferes with production of DNA building blocks) and platinum chemotherapy using cisplatin or carboplatin. They received triple therapy every three weeks for four cycles, followed by dual maintenance therapy with the assigned intervention plus Alimta for up to 35 cycles. People in the placebo group who experienced disease progression could cross over to receive Keytruda, and about half did so.

After about 11 months of follow-up, the median overall survival was 11.3 months in the chemotherapy-only group but was not reached in the Keytruda plus chemotherapy group because a majority of participants were still alive. The estimated one-year overall survival rate was 69.2 percent in the Keytruda group versus 49.4 percent in the chemotherapy-only group. The risk of death was 51 percent lower in the Keytruda group overall and 58 percent lower for those with high PD-L1 levels (50 percent or higher). Even those with PD-L1 levels below 1 percent saw a 41 percent reduction.

The median progression-free survival duration, meaning participants were still alive with no worsening of disease, was 8.8 months in the Keytruda combination group versus 4.9 months in the chemotherapy-only group. Progression-free survival rates were 34.1 percent and 17.3 percent, respectively. People on Keytruda had more than double the overall response rate, meaning complete or partial tumor shrinkage, compared with those on chemotherapy only (47.6 percent versus 18.9 percent).

Gandhi noted that the survival benefit was clear even though about half of the participants in the placebo group ended up crossing over to Keytruda, suggesting that the advantage might be even greater when comparing those who actually used Keytruda as first-line therapy and those who used chemotherapy alone throughout.

Treatment was generally safe, and side effects were consistent with those seen in other studies of these drugs. Similar proportions of people in the Keytruda and chemotherapy-only groups experienced serious adverse events (67.2 versus 65.8 percent, respectively). However, people taking Keytruda were more likely to develop acute kidney toxicity (5.2 percent versus 0.5 percent). Nearly twice as many people in the Keytruda group stopped treatment because of adverse events (13.8 versus 7.9 percent).

A major concern with checkpoint inhibitors is immune-related adverse events. In addition to restoring immune response against cancer, these drugs can also take the brakes off the immune system more broadly, leading to excessive inflammation of healthy organs and tissues. Immune-related side effects occurred in 22.7 percent of Keytruda recipients compared with 11.9 percent of those treated with chemotherapy alone; three people in the Keytruda arm died of pneumonitis (lung inflammation).

“There is good scientific rationale for combining Keytruda with pemetrexed and platinum chemotherapy, and these clinical data now suggest this combination as a new standard of care for the first-line treatment of these nonsquamous non-small-cell lung cancer patients,” Gandhi said is a Merck press release.

Click here to read the full study report in The New England Journal of Medicine.