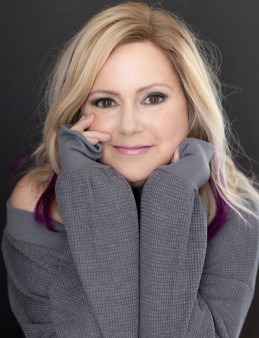 Erin Cronican is an actress, singer, director and producer in New York City. She has Stage IV metastatic breast cancer.

On December 30, 2021, I took on the role of a lifetime. On a stage in a 75-seat theater in the East Village of New York City, I was honored to play the role of Vivian Bearing—a Stage IV ovarian cancer patient—in the Pulitzer Prize–winning play Wit. Since it was first published in 1995, Wit has played live performances to thousands of appreciative audiences, most of whom likely had their lives touched by cancer in some way.

But many in the audience that night did not know how meaningful this play was to me, a current Stage IV patient. Because, you see, a little over three years ago, I had a recurrence of breast cancer, with mets [metastasis] to my brain, lungs, liver and bones. I was first diagnosed with Stage II breast cancer in 2015, and now it was back—with a vengeance.

My life expectancy, depending on what sources I read, was either two to three years or three to five years. It seems I am living on borrowed time, and, as such, I felt I needed to do this play, to help others understand my story through the veil of a brilliantly written drama.

So I set out to teach others about the intricacies of living with cancer. But I found that what I learned myself was even more valuable.

I learned that in order to be whole, I needed to allow myself to grieve. Grieving may include crying. Yes, a lot of crying.

But I also allowed myself to give in to the rage that has been building. Despite my lifelong avoidance of a “poor me” mentality, I allowed myself to feel the unfairness of the whole situation. None of us have brought on our cancers. It’s indiscriminate and brutal.

Why did I get breast cancer in my 30s? I had no family history of note. I ate well. Exercised. So why me? For the first time, through this play, I learned to rage, in a far healthier way than I had imagined was possible.

I learned the meaning of grace. For so long, I’ve resisted accolades like warrior, hero, inspiration, brave one, fighter. But in allowing audience members from Wit to share their admiration, with grace, I got to see how much love there is in the community. How we are all connected if we only share ourselves with purpose.

I learned that I have so much more than inspiration to offer  from having cancer. I still have a beating heart. I still have goals for what I want to accomplish in my life. Yes, I still have good days. Amid the bad days of chemo side effects, endless scans, radiation sessions and surgeries, I cherish days of sunshine, playtime with my rescue dogs, cuddles with my spouse, the taste of a good bourbon and the appreciation of great art of all kinds.

When I chose to do Wit onstage, I expected it to change others. I did not expect the biggest change to happen within myself.

Erin Cronican is cofounder and executive artistic director of The Seeing Place Theatre in New York City, where Wit was performed. To learn more about Cronican, visit ErinCronican.com.

Editor’s note: It is with great sadness that we report that Erin Cronican died on June 30, 2022. She was a brave, soulful and moving artist.