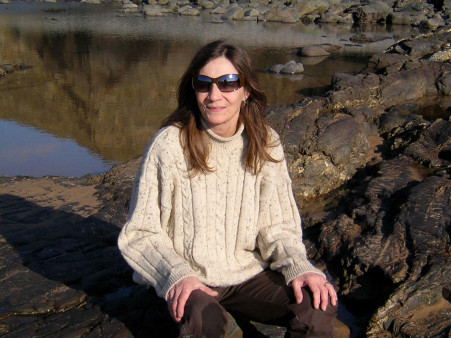 The Legacy of Cancer Treatment

Caz Challis, from North Devon, England, was diagnosed with lymphoma when she was 36 years old.

I was diagnosed with lymphoma when I was 36 years old, and 24 weeks pregnant with my third child. After the birth of my son, who is now 23, I had two six-month rounds of chemotherapy before it was decided this wasn’t going to cut it with the cancer, so I was prepared for a bone marrow transplant. My stem cells were harvested, I was given a high dose of chemo, and then I was “rescued” with my own stem cells, spending four and a half weeks in isolation.

During the preparation for the transplant I was told, casually it seemed, that I had hepatitis C. It went in one ear and out the other. After all, I was about to go into an isolation room for several weeks and I had a 50 percent chance of ever coming out again.

I pretty much ignored the hepatitis C for the next 10 or so years. I regained my health, set up a local cancer support group, and completed a counseling diploma. After five years, the cancer returned, and I had radiotherapy and surgery to remove a massive tumor. I was attending Plymouth hospital for double oncology and hepatology appointments every six months. For several years, I refused the dreaded interferon/ribavirin hepatitis C treatment when it was offered. Eventually, my excellent hepatologist persuaded me to undergo 48 weeks of treatment, but I only lasted 14 weeks before my blood counts dropped scarily low, as my bone marrow was still suppressed. I couldn’t get out of bed, and they had to halve my ribavirin. My viral load began to climb again and I was pulled from treatment.

By this time (2004), I had woken up to the reality of the legacy of the cancer treatment. Three consultants agreed that I must have contracted hep C during all the procedures, but finding out how or where would be like looking for a needle in a haystack. I spent 10 years unsuccessfully trying to get compensation.

I began, as I had done with the cancer, to search for holistic ways of getting well again. I used nutrition, acupuncture, meditation, affirmations, guided visualizations, healing, yoga, exercise and a lot of hope to get me through while I waited for new, interferon-free therapies.

It’s hard to tell where recovery from chemotherapy ran into symptoms of the hep C, but for several years I seemed to be on a roll. Although more tired than others my age, I could travel, swim, continue my yoga, go to parties and generally live a full life. But hep C is silent and stealthy.

About 15 years after my diagnosis, I began to notice muscle aches after yoga. I began to feel more and more fatigued. My appetite reduced and food intolerances grew. Exercise guaranteed a big payback of fatigue the next day. In those days, even 20 minutes of mild gardening could cause fibromyalgia-like symptoms, such as fatigue and aches. Brain fog came and went, along with gastritis and exhaustion. I had gone from barely acknowledging the hepatitis to having to be constantly aware of it in order to “control” it. My liver was doing well and I only had mild fibrosis so far, but I knew that, without treatment, further down the road lay possible cirrhosis and liver cancer, and the daily fight against the virus took its toll. I paid great attention to my diet and stayed as fit as possible within the fatigue.

I spent a lot of time resting. As work was out of the question, I enjoyed spending time with my family, outdoors in nature, doing research, supporting others with the condition and trying to spread awareness (get tested, people!).

And always waiting-waiting-waiting. If hepatitis teaches us one thing, it is patience. Like cancer, it also gives us time. Time to re-evaluate, time to just “be,” and time to appreciate the little things and count our blessings.

Finally, in the summer of 2014, my patience was rewarded and I got the news I had been longing for. My consultant, who I trust with my life, was running a trial of new Gilead drugs, which would treat all genotypes, and he wanted me on this trial of Sovaldi and GS-5816. I rang the research nurse every single week so she would not forget about me! I began in October 2014, taking one pill a day for 12 weeks. It was a double-blind trial, with a 1 in 6 chance of placebo. I was sure I had the real drug! I finished the treatment, and waited the 12 weeks for the blind to come off. In shock, I heard the news that I had pulled the short straw, and had been on the placebo. Now I had to rescreen and begin all over again. As I type this, I have 13 pills left of 84. My viral load at screening was over 2 million. After one week of pills, it had dropped to 356. After 2 weeks, it was 113. After 4 weeks I was negative! I remain negative at week 10, and I am sure this is the magic bullet and I will be cured. The 3-month post treatment blood test will show if I have achieved SVR (sustained virologic response or “cure”) or not, but I am extremely optimistic, as is my consultant.

Many of you who read this are still waiting for treatment. While you wait, it’s very important to look after yourselves as well as you can. Eat well—fresh food, no junk—exercise enough and stay healthy. Appreciate the little things and bide your timehopefully it won’t be long now before hepatitis C is history.

What is your greatest achievement?
Setting up a cancer support group just after a bone marrow transplant

What is your greatest regret?
Not answering my baby’s cry

What keeps you up at night?
Late Junction (world music on the radio)

If you could change one thing about living with viral hepatitis, what would it be?
I would see access to treatment for all living with this disease

What is the best advice you ever received?
Take your f***ing ego to the sky, Carolyn!

What person in the viral hepatitis community do you most admire?
There are so many wonderful advocates out there.

What drives you to do what you do?
I care.

What is your motto?
Do it with love.

If you had to evacuate your house immediately, what is the one thing you would grab on the way out?
My dog (my children are grown up and have moved out)

If you could be any animal, what would you be?
A peregrine falcon because they can fly so well and so fast; they have no predators, and they live on my favorite stunning cliffs where my ashes will go when I pass.