Jeff, Will, Andrew and Melissa Neurman Courtesy of jeff neurman

Six years after his diagnosis with chronic lymphocytic leukemia, Jeff Neurman blogs and cohosts a podcast for men with cancer. He lives with his family on Long Island, New York.

I had turned 40, and I figured it was a good time to get a physical. They did routine blood work, and when it came back, my doctor said my white blood cell count was high. At the time, my wife, Melissa, and I had two sons, a 3-month-old and a 3-year-old, so somebody was always sick with something. I figured it was just a bug.

But they reran the blood work, and the numbers did not improve. They tested more blood and concluded that I had chronic lymphocytic leukemia (CLL), and my life changed forever.

I saw the oncologist every three months. I had no sense of whether things were getting worse or staying stable; everything was determined by what the phlebotomist sucked out of my veins.

CLL is generally an older person’s cancer, so to be diagnosed at a young age is problematic. You don’t know how rapidly the illness will progress. So I was watching and waiting for about four and a half years.

The oncologist gave me three options: one, do nothing, which he did not advise; two, traditional chemotherapy; three, a clinical trial. When Melissa and I started asking questions, he interrupted, saying, “You have all the information you need. Go home and think about it, and let me know what you want to do.”

We were stunned that he would just cut us off when this was obviously a huge decision. That’s when we decided we needed to get somebody else. My current oncologist is a CLL expert and just fantastic. She presented me with the same options and recommended chemo because two thirds of the people with my markers who go through this regimen do not need further treatment. 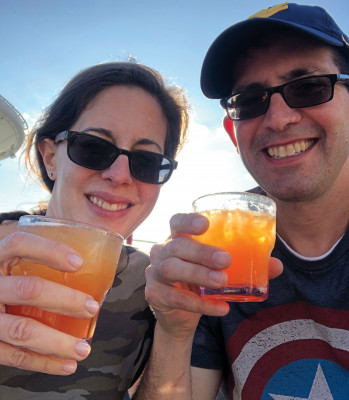 We delayed chemo to get past cold and flu season. It was six rounds of treatment, so I would have treatment one week and be off for three weeks. The first day, I would be at the infusion center all day, then that night I would feel OK. By the end of the second day, I would start feeling run-down. By the end of the third day, I would be pretty nauseous, and that would last until the sixth day, when I would start to feel more normal for the next couple of weeks. Then the cycle would repeat.

I’m lucky because I have a terrific wife and a terrific family and great friends. My parents, who don’t live locally, came a couple of times, and my in-laws live nearby, so they would help out. I didn’t tell too many people I had cancer, and, as a practicing attorney, I definitely wasn’t advertising it
to my clients.

After I finished chemo, I was told that my white cell count was down to around where they wanted it, but it would be two years before we’d know how effective treatment has been. This means for the next couple of years, I still have to go in for testing every three months, just like before.

I was devastated, and I was very angry. I was so eager to have a life that didn’t revolve around having cancer. But once you have cancer, it never really goes away. CLL is not curable—even if you’re in remission, like me, you’re always living with the specter of cancer.

When I was going through chemo, I took my laptop for work, but, really, I was writing about everything that was happening, and I started producing a blog. It was a really good outlet. It has also allowed me to connect with others who are going through similar experiences.

I started a podcast, Guys With Cancer, with my friend Rudy Fischmann, who has brain cancer. When you’re a guy with cancer, there’s societal pressure—real or perceived—to be stoic about it, which is totally unhelpful. We want there to be a place for men and people with men in their lives who have cancer to understand what they’re going through. 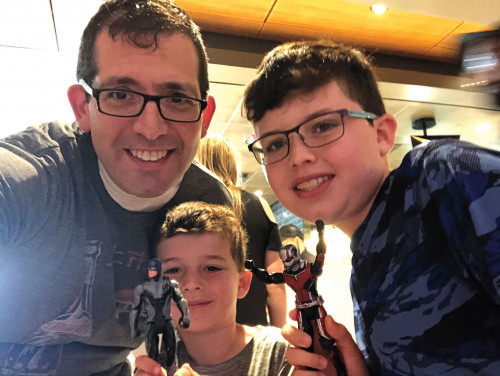 Jeff and his sons, Andrew and WillCourtesy of jeff neurman

In these first three months, my health has been stable. As a result, my oncology checkups have mercifully been spaced a bit farther apart. Around Thanksgiving of last year, I was quite ill with some unknown virus. Ultimately, I emerged seemingly unscathed, and the hyper-concern about my well-being that I experienced during that acute period apparently has caused me to involuntarily worry less about my health.

Of course, while “enjoying” this span of relatively ignorant bliss (is ignorance a prerequisite to bliss? I think likely so), I then became distracted further by that which has preoccupied nearly all of us, a new health disaster making a play to become the new C-word. Naturally, as someone with an already faulty immune system, I was far from complacent about the novel coronavirus. But again, bizarrely, in some ways, I was better suited for it than most of my friends and neighbors because I was already accustomed to taking many of the precautions that so many others are now struggling to adopt.

A type of blood cancer

Chronic lymphocytic leukemia, the most common type of leukemia in adults, occurs when immature white blood cells in the bone marrow grow out of control. It affects cells that carry out immune responses, usually antibody-producing B cells. These abnormal blood cells can crowd out healthy ones, leading to complications, including increased susceptibility to infections.