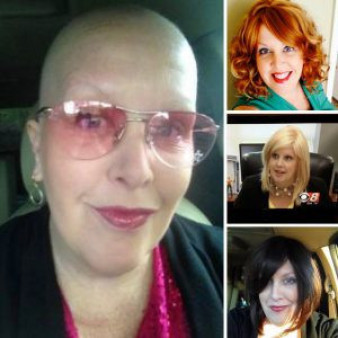 Ronda Walker was diagnosed with locally invasive breast cancer in December 2014 and underwent eight rounds of chemotherapy. Courtesy of the Centers for Disease Control and Prevention

Life Goes On During Treatment

Breast cancer was my reminder that life is short, and tomorrow is not promised.

April 6, 2020 • By Centers for Disease Control and Prevention

My beautiful long, blonde hair was completely gone just after the new year. I was forty-two years old. I will never forget the look on my seven-year-old son’s face the first time he saw me bald — his sad eyes broke my heart. He could not wrap his mind around the thought that a doctor would give me medicine that would make my hair fall out.

It was one week before Christmas 2014 when I was diagnosed with locally invasive breast cancer. I had two tumors in my right breast, two different types of cancer. One tumor was the size of a lime, the second tumor was the size of a penny. A scan revealed the presence of cancer in several lymph nodes around my right breast. Basically, I was a mess! An aggressive course of treatment was necessary. First, I did eight rounds of chemotherapy to shrink the tumors… The first couple of rounds, while bad, were tolerable. As the treatment continued, my fatigue was extreme, I experienced sores in my mouth, I had constant nausea, and of course I was bald. I followed up chemo with a mastectomy and then went on to twenty-eight rounds of radiation. Radiation, like chemo, was easier at first and then toward the end caused burning and extreme pain in the radiated area. After I healed from radiation, I had a fourteen-hour reconstructive surgery. My breast cancer fight lasted for an entire year. But let’s go back to the beginning.

I stayed home the first week of the new year, wallowing in nausea and self-pity, but the time came for me to go back to work. I am the vice chairman of the Montgomery County Commission in Alabama, and I had a commission meeting that I did not plan to miss. I woke early, smoothed on some makeup, and fidgeted with my wig until it didn’t look too fake to me. I had to sit and rest in between putting on each article of clothing. The exhaustion pulled me back to my warm bed, but I fought it. I forced a smile on my face and walked out of my bedroom to find my precious six and seven-year-old children sitting in the kitchen. They had gotten themselves up and dressed for school. They had no idea just how sick their momma was, but they instinctively knew they needed to step up and be helpful. We drove to school in silence because I was too exhausted to speak. I dropped them off with a mumbled I love you, then headed downtown to the commission chamber.

Then, Life Goes On During Treatment

As I walked into the crowded board room, I was greeted by friends and colleagues, who gave me warm hellos and expressed genuine concern. It was the first time they had seen me since I started chemotherapy. Although well-meaning, I had to wave off their hugs and handshakes. It was January, the height of cold and flu season, and thanks to chemo my white blood cell count was at a dangerously low level. The risk of infection loomed large, and infection would have landed me in the hospital and delayed my treatment. I had learned what to do and what not to do to avoid infection. Additionally, online resources like https://www.preventcancerinfections.org provided information and reminders about what to do in case of fever, nausea, shortness of breath, and other signs of infection. There was never a moment when I wasn’t keenly aware of the danger of infection and what it would mean for me if I got one. I worked hard to avoid it.

The commission meeting ended, and I left the building. I would go on to attend every single commission meeting I had during my chemotherapy and radiation treatments. Normalcy was the goal, and although it required a remarkable amount of toughness and perseverance, it was a goal I was determined to reach. Knowing the facts and keys to preventing infection gave me confidence to keep my life as normal as I was physically able to. Fighting cancer is a marathon, not a sprint. Keeping my mind focused and my attitude positive made all the difference in the world.

If you’ve ever had to endure the misery that is chemotherapy, you know you have bad days, really bad days, and days when you would prefer to be dead. On one of my really bad days, after dropping the kids at school, I came home, collapsed on the couch, and opened my Bible. It was February, it was cold outside, and the landscape was barren and lifeless—kinda like I was! I was beat down, I was discouraged, and I felt horrible. I asked God, no, I begged God, to comfort me in some way—big or small—to help me feel His presence. I knew intellectually that God was with me, but that day I truly needed to experience Him in a tangible way.

The Comfort of a Tasty Treat

Later that morning, as I was curled up on the couch watching TV and feeling miserable, I kept seeing commercials for plump, juicy berries covered in delicious chocolate. The ads go in heavy rotation around Valentine’s Day, and it was early February, so they were frequent. I think their ads literally came on during each commercial break. By lunchtime I couldn’t take it anymore, I had to have a chocolate covered strawberry! I went into the kitchen and searched the fridge up and down for a strawberry and some chocolate, to no avail. There wasn’t a single thing in my house that would be considered fresh. I did find an almost empty bottle of chocolate syrup and I got a teaspoon of that, but it didn’t do the trick. I did not have the energy to drive to the grocery store, so my craving for a chocolate covered strawberry would go unsatisfied. Back to the couch I went to watch TV and feel sorry for myself.

That afternoon I had to pick my children up from school. Devoid of energy, I didn’t talk much on our short drive home. As we pulled into our driveway, I noticed something on our doorstep, it was a box. As I got close enough to read the writing on the box, I began shaking like a leaf and tears welled up in my eyes. I could not believe what I was seeing. It was a box of chocolate covered strawberries sitting on my doorstep! They were sent from my friend Jessica, who lives in Washington, DC. I had never in my life asked anyone for those treats. I don’t know that I ever thought much about them until that very day. But that morning, in my weakness, I asked God to comfort me in a tangible way, and He sent me exactly what I asked for, a box of chocolate-covered strawberries.

It took me a full year to fight the cancer that was in my body, and I’m happy to say I won that fight. Five years later, I’m still doing fine. Better than fine, actually. Yes, I deal with grief, pain, and fear every single day. But for all that cancer took away from me, it gave me something extraordinary. Cancer gave me a new perspective on life. Cancer gave me the opportunity to live my life in the moment, with intention. Cancer was my reminder that life is short, and tomorrow is not promised. I oftentimes hear people ask, “where has the time gone?” but not me. I can honestly account for every minute of every day since my diagnosis. I don’t take one moment for granted. I don’t sweat the small stuff. I don’t back down from a challenge. And I savor each moment with the people I love — cancer did that, and for that I am grateful.

Ronda M. Walker is a wife, the mother of four, the vice chairman of the Montgomery County Commission in Alabama, a speaker, and a writer. She is also a certified organizational trainer for Troy University.

This article was originally published on February 10, 2020, by the Centers for Disease Control and Prevention. It is republished with permission.