Karen Hoyt was named Lifeshare Oklahoma’s Advocate of the Year in 2018. Courtesy of Karen Hoyt

Karen Hoyt, 62, promised her grandkids she would win a gold medal in the World Transplant Games. She wasn’t going to let hepatocellular carcinoma stand in her way.

My liver suddenly failed as I was cycling along the Arkansas River near my home outside Tulsa. I just turned yellow, and I swelled up overnight. I was jaundiced and had internal bleeding, which I had thought was a stomach virus. My doctor sent straight to the hospital; within 24 hours, I was diagnosed with end-stage liver failure. At that time, I’d had the hepatitis C virus for decades but didn’t know it. I changed my diet and took a lot of medications to reduce the symptoms.

I had gotten my MELD score (a measure of liver disease severity) down from 13 to 8, and I began the 48 weeks of interferon treatment for hepatitis C.

I had completed 43 weeks of treatment when I had severe internal bleeding from portal hypertension. I had to stop treatment, and I still had end-stage liver disease. I began surveillance. Every six months, I had an ultrasound scan and blood tests, and the doctor continued to monitor my medications and monitor the portal hypertension. I still had a lot of fatigue and some hepatic encephalopathy, which is brain fog from the liver not filtering ammonia. 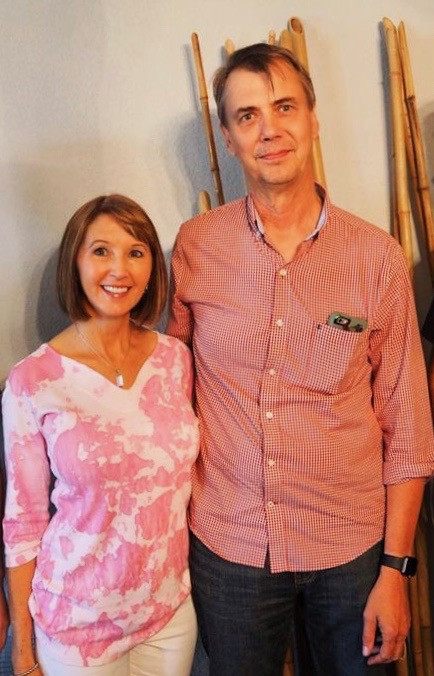 Karen Hoyt with her husband, JoeCourtesy of Karen Hoyt

Although I stopped treatment early, I got my six-month sustained viral response (SVR)—I was cured of hep C! I got remarried, to a guy who stood by me during treatment; my first marriage had ended two months before my liver failure in 2011. After my SVR, I said, “OK, I’m going to live. We can get married now.” I was physically active, and I was running 5Ks again, although slower.

I also started my website, I Help C. My husband saw all the writing I’d started doing after my liver failed and said, “Why don’t you start a blog?” And before I knew it, I had 20,000 words in. [Editor’s note: Hoyt’s blog is featured on our sister site, Hep.]

They found a spot on my liver in my regular ultrasound scan, and my blood labs found an elevated AFP marker. That meant that I had hepatocellular carcinoma (HCC). At the time, they told me I had less than 12 months to live.

They listed me for a liver transplant. Part of that process meant I had to be on disability, so I stopped teaching and began beating cancer as my new full-time job. And it was tough. My family—my daughter, her two daughters, my four siblings, my husband—was having a rough time. I’d been sick for so long. You have to educate your family on how to live with your cancer.

One night, I showed my grandkids videos of the World Transplant Games, which holds summer and winter sporting events for transplant survivors. I said, “All of these people were dying of something, and they got a lifesaving transplant, and now they race each other. And I’m gonna go win a gold medal.”

I began working out on an indoor bicycle. With the help of my doctor, I came up with a training regimen to keep my heart and lungs healthy in the hope that I would live long enough to get a transplant and endure the several-hours-long surgery. A lot of my cancer fighting had to do with understanding eligibility for transplantation. You have to fall within what’s called the Milan criteria, so they do bone scans, chest X-rays, MRIs and lots of radiology to confirm that you’re indeed a candidate for a transplant. It took about three days just to get through the listing process. Then you watch and wait.

They used radiation to downstage the tumor to keep it within the Milan criteria. First, I had a transarterial chemoembolization (TACE), where they injected radioactive beads into my femoral artery to surround and shrink the tumor.

The tumor was nearly obliterated. Many times, TACE is all it takes. I have so many readers who have TACE done and their tumor is gone. So then I decided I wanted to be taken off the transplant list. I was shaken by the idea that someone would have to die so I could get their organ.

My social worker said no. She told me to get through Christmas. I said, “I thought I wasn’t going to make it to Christmas!” And she said, “You’re making it through Christmas—your tumor shrank. Come back in January, and we’ll talk again.”

I got a call that they had a liver for me. My entire family drove to Oklahoma City, and I waited in the hospital 24 hours—and it went to someone else. For transplantations, they always call at least two candidates, and they usually have a third person in mind so that no valid organ is ever lost or wasted. I was the backup.

I went back for an additional CT scan, and was told, “You’ve popped a new tumor.” I told my radiation oncologist to get in there and shrink those things. We looked at all the Milan criteria and decided I could stay listed.

To downstage the new tumor, I underwent an ethanol alcohol ablation. That’s a pretty rough one. It involves injecting a lot of ethanol directly into the tumor. It can send you into liver failure.

If downstaging doesn’t work and you no longer meet the criteria, you’re removed from the list and go into hospice care. I was on the edge the whole time. That was the way our lives went—counting centimeters of tumors, watching the organ procurement network.

I got another call. We went to Oklahoma City, and, again, after 24 hours in the hospital, they told me the primary recipient had been successfully transplanted, so I went home. I was pretty traumatized. I was still doing my indoor cycling, still training for the Transplant Games.

It was a rough time. But I had made peace. I was looking at the legacy of my life: What have I done for the world? How will I be remembered? I continued to teach yoga and do a lot of volunteer work in my community, to the degree that I could.

I put complete trust in my medical team. My team is still like family to me, including my social worker, who would cheer me up, and the nurse, who would jump on my back if I missed a blood lab. 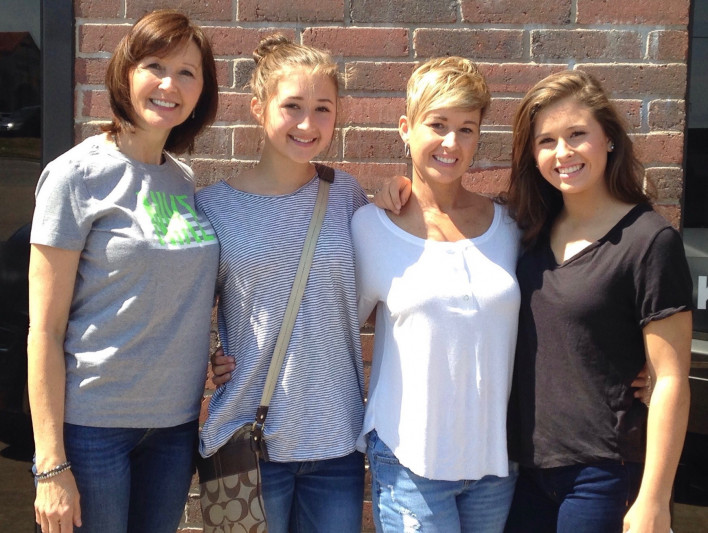 After two dry runs, I was exhausted. But when I got to the hospital after the third call, they told me I was the primary candidate. I ended up waiting nearly 48 hours before going into surgery. I knew that while I was waiting, a family was going through a really rough time. A 17-year-old boy had had a traumatic brain injury, and his mom made the tough choice to donate his organs. He saved five lives, and mine was one.

Immediately after my surgery, I felt better than I had in 20 years. I’d been so sick with liver disease for most of my adult life—including all those years I had hepatitis C—that I didn’t know what health felt like. 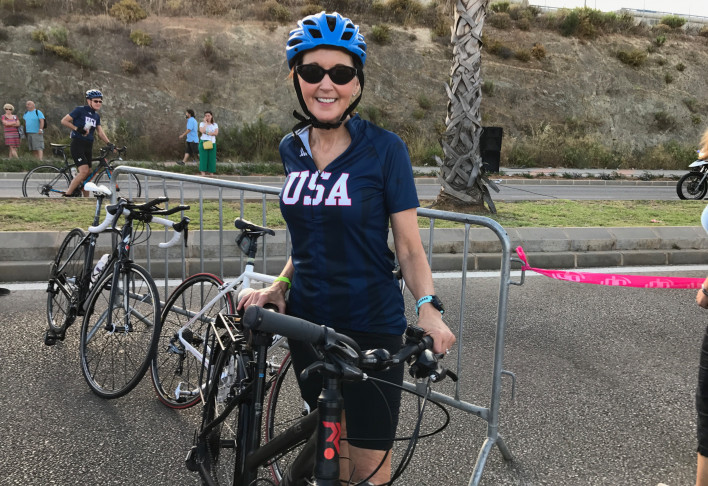 I went to Spain and won that cycling gold medal at the 2017 World Transplant Games, just like I said I was going to. I’ve also run a lot of 5Ks and 10Ks posttransplant to raise awareness. That was how my donor’s family found me. Now I know his name, and I got to visit his grave.

After my transplant, I was still getting MRIs every six months. In April, they told me that I’m past the danger point. They’ll do one more MRI in April 2020—the five-year posttransplant mark—and if everything is still good, they’ll consider me cancer-free.

When I was diagnosed with HCC, I told my granddaughter, “I’m not going to die. I have to see you graduate from high school!” I had hope, and I had to teach my family to share it. And in May, almost five years later, I watched her graduate.

I continue to work. I contribute to health websites, including Healthline and Hep. I do a lot of speaking to nurses, hospital CEOs and medical students, talking about the patient perspective. I like to talk about the empathetic side of patient care, understanding how vulnerable we are. I don’t want anyone else to feel as alone as I did. 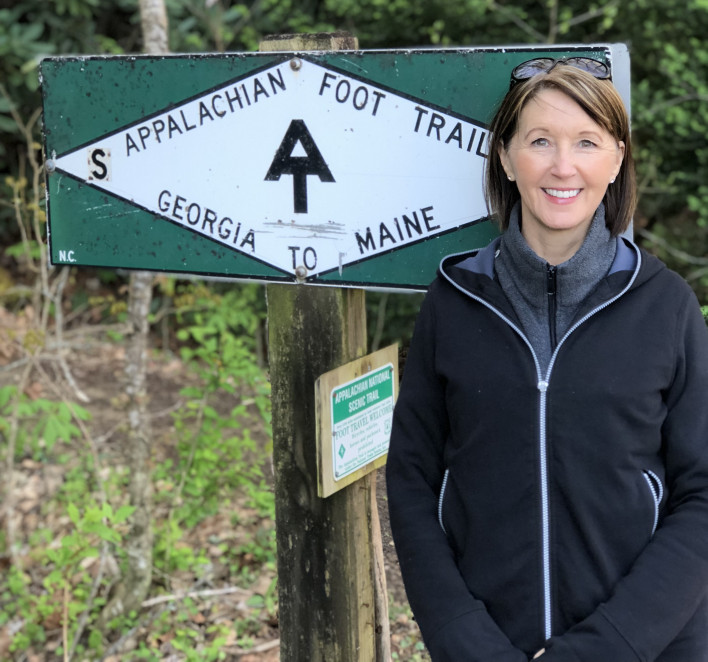 Karen Hoyt hikes a section of the Appalachian Trail after her 2015 transplant.Courtesy of Karen Hoyt

Cirrhosis: Scarring of the liver that prevents it from functioning properly

Hepatitis C virus (HCV): A virus that infects the liver and can cause liver cirrhosis and hepatocellular carcinoma. New direct-acting antivirals can now cure HCV in two or three months. Formerly treated with interferon for six to 12 months.

Hepatocellular carcinoma (HCC): The most common type of cancer that starts in the liver

MELD score: Model for End-Stage Liver Disease score, a measure of liver disease severity and life expectancy. A score under 10 means you need only annual rechecks.

Milan criteria: Criteria based on tumor size and location that are used to determine eligibility for liver transplantation in people with HCC

Portal hypertension: Scar tissue that blocks a major vein in the liver, which can lead to bleeding in the stomach and esophagus, abdominal swelling and other symptoms.