Avie Barron, 34, lives with her husband, Tim, and their three children in Southern California. She was diagnosed with non-Hodgkin lymphoma in 2017. Her blog, Breathing Again, is featured on CancerHealth.com.

We had a really heavy flu season. First, our kids got sick, then my husband came down with it and then I started noticing symptoms. I was coughing and having a hard time breathing, but things got crazy with the kids’ schedules, and I assumed it would go away on its own.

I train jiujitsu with my husband, and part of that is a lot of cardio and a lot of heavy breathing because you’re essentially wrestling with other people. My training partners started noticing that I was short of breath.

I kept having serious shortness of breath in jiujitsu. My coach told me it wasn’t normal, and it wasn’t. I was struggling, and my face was turning blue. We thought maybe it was allergies or even pneumonia or bronchitis from that flu. I kept pushing it off and pushing it off. I thought I might just need an inhaler. I had started noticing that anytime I breathed in, it sounded like Pop Rocks in my chest.

Then, the Thursday before Memorial Day, I almost passed out after 20 jogging steps. My husband and our jiujitsu coach both insisted that I go to urgent care. I drove myself there and explained my symptoms. They did a chest X-ray, and it was cloudy. They said there was an “opacity,” which I didn’t understand, and they sent me to a bigger hospital for a CT scan. That’s where they found the tumor.

I was only 32. I’d never had symptoms before that year; there was no history of cancer in my family; I wasn’t a smoker. It was a lymphoma in my lungs. The first question they asked was, “How long have you been smoking?” 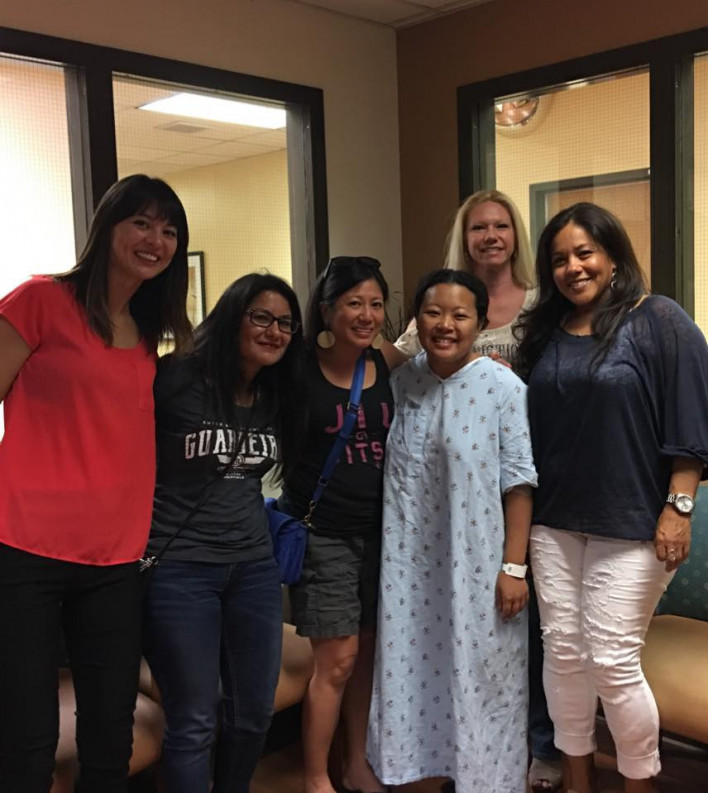 At the hospital, they said they had to run more tests, and because I had so much fluid in my lungs, they couldn’t release me until the doctor saw me, which wouldn’t be until after the long weekend. The fluid in my right lung was the reason for the crackling sound when I breathed, my shortness of breath and the coughing, and they wanted to drain it. And they had to send a biopsy of the mass—that opacity in my right lung—for testing. It was intense.

I started blogging that weekend in the hospital. The idea came from my pastor’s wife, whose father had been using blogging as therapy during his own cancer experience. I got a huge response right away; my words were hitting home for a lot of people who had been affected by cancer. That was my motivation to keep the blog going when it got really hard.

They had expedited the biopsy, and so right after Memorial Day, I got my diagnosis: primary mediastinal large B-cell lymphoma, Stage II. I had an 11-centimeter tumor on my right lung, pressing on my superior vena cava artery. That location eliminated any possibility of surgery—they didn’t want to risk damaging my heart. They decided to start my chemotherapy right away. I got my first dose of R-CHOP, one of the more aggressive chemo regimens, and they wanted to keep me in the hospital even longer than the week I’d already spent there. My specialist disagreed; he said one day of infusion, three or four days of oral chemo and then 21 days of rest. After my first round and a week in the hospital, I was finally able to go home.

Everything had to be flipped upside down. The kids were still in school, and I was still working full-time. My husband was working full-time too, so we had to do a lot of scrambling. I work for local government, and thankfully, I didn’t have to worry. They said, “Your job is safe. We’ll support you in whatever way that we can; you just do what you have to do.” That was a huge weight off our shoulders, getting leave and still getting a paycheck.

We also had a huge support system within our community: our neighbors and friends, people from church and people from jiujitsu. My husband and I had said we could do it on our own, but we didn’t want to block peoples’ blessings. People want to help when they feel helpless. 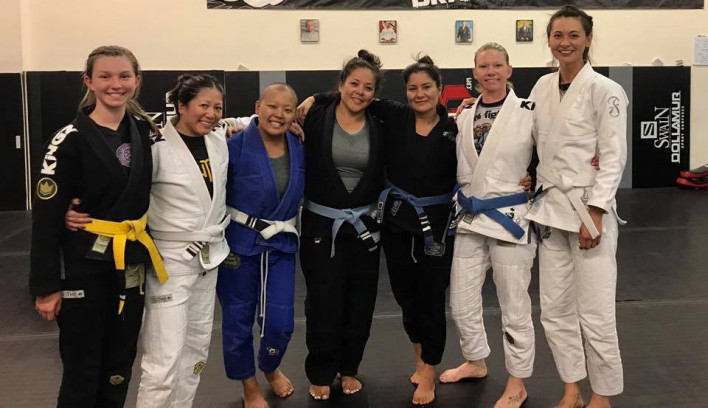 Avie Barron (in blue) at jiujitsu training in July 2017, during her third round of chemoCourtesy of Avie Barron

The first three rounds of chemo were OK, but it got progressively worse. The fourth round really hit me. My hair was gone, and my appetite was gone, and the nausea and all of that really started to affect me. Being so active and so young and having young kids—they were 9, 5 and 4 then—we were always on the go. To just stop all of that and force myself to lie on the couch and rest was really hard.

After the seventh round of chemo, my doctor raised the possibility of my receiving a stem cell transplant. The prospect of having to be in the hospital for three to four months, isolated from my family, was crushing—not being able to see my kids, not being able to go home to them and tuck them in. That’s when it really, really hit Tim and me hard. Our kids too; they started crying and asking big questions: “Are you gonna die? Are you gonna go to heaven? Is God taking you away from us?” Having to explain that to your kids is not something any parent wants to do.

I’m so thankful for—and blessed with—my medical team, because they knew their stuff. But sometimes it’s hard for doctors to speak to patients in a way that we can understand. I really am grateful for my husband; he was always the one who was like, “English, doctor. English.” 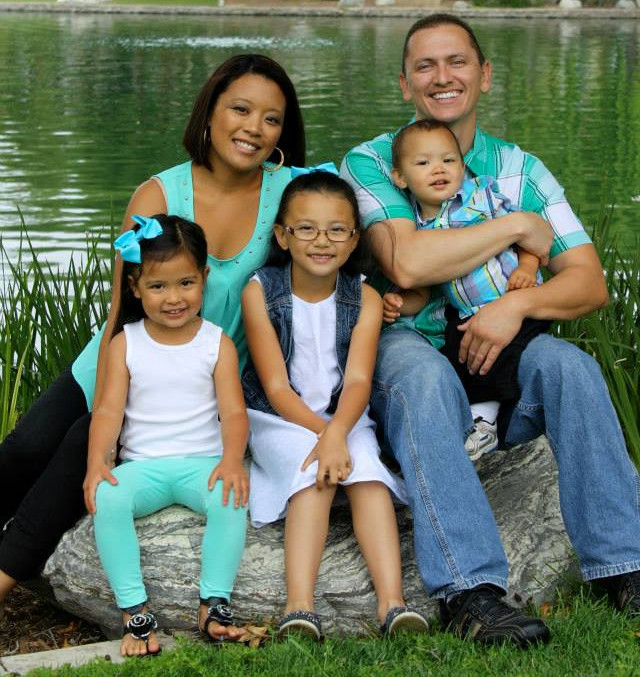 Avie and Tim Barron with (from left) children Jamie Lynne, Paige and ElijahCourtesy of Avie Barron

After my last round of chemo, my doctor had referred me to a specialist, but I had to get another PET scan and a biopsy first. The tests showed that my tumor was “dead.” It will never be gone, but it was dormant, which meant I was in partial remission. No transplant! Instead, I would start three weeks of radiation in December. It was an early Christmas present for all of us.

My first posttreatment scan came back clean, and I’ve been in remission since. Now, I had to start figuring out what life after cancer would be like for me and my family.

I gave testimony in my church about my experience. I was scared, but I felt like I was being called to do it. Our community had done so much for us, stepping in when they saw we needed it, not taking our “No, thank you” for an answer. It was really humbling to see how much our family was loved. My message was, and has always been: “Don’t feel like you have to go through things alone.” Don’t turn away the help. Tell people what you need—whether it’s a meal or listening to you vent about how crappy chemo is going or sitting with you to watch TV and help you feel normal for an afternoon. Being able to speak to that, to relate to people going through it and explain it to people who aren’t—that insight is a gift to share.

My husband and I are both cancer survivors—he was in treatment for testicular cancer when we met in 2003, and he’s been in remission since 2004—so when we tell people, “We know what you’re going through,” we really know what they’re going through.

I started using a lung trainer to break up the scar tissue in my lungs and improve my lung capacity. It’s very hard. The scar tissue is from radiation, and my tumor will always be there, so my lung capacity will never be the same. I have to learn when to push myself and when I need to rest. As a jiujitsu competitor, I really have to breathe deeply. I’d like to go to a specialty facility for treatment and therapies for my lungs, but that isn’t covered by my insurance.

I think I push myself so hard because the kids are still watching. I want them to understand that just because this temporarily set me back, it doesn’t mean that I’m incapacitated for the rest of my life. I still have the rest of my adult life to do the things that I want to do. I want to show my kids how to grow through the adversity—that we went through this as a family, got through it as a family and are continuing to thrive as a family.

It’s only been a year since I stopped radiation; I’m still recovering. For me, recovery includes daily reminders to myself to continue to live my life despite what happened to me, to take the positive things from this experience and push forward. 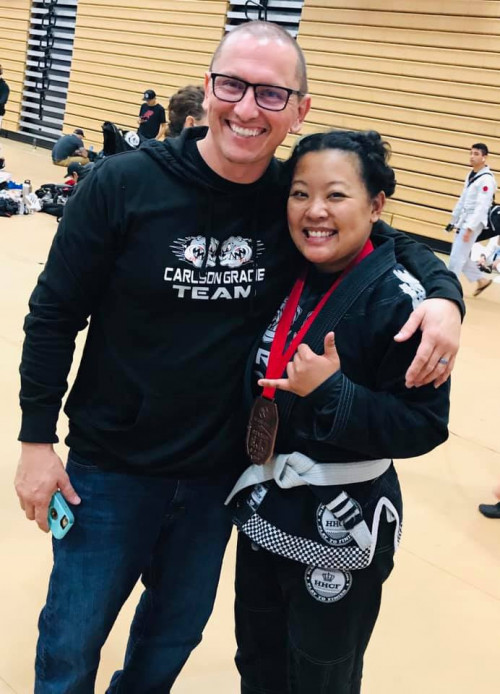 I earned my blue belt in jiujitsu three years after Tim and I first signed up for it and almost two years after my cancer diagnosis. My blue belt is a reminder of what I’ve overcome—the tumor and chemo and radiation—that I am blessed to keep fighting when so many others have lost their own battle. Cancer has a way of showing you that sometimes there is no “someday”; there’s only today, so make the most of what you have and do something.

Lymphoma occurs when white blood cells, usually in the lymph nodes, grow out of control. Primary mediastinal large B-cell lymphoma (PMBCL) is a type of non–Hodgkin lymphoma that starts in the space between the lungs behind the breastbone. It is most common in young women.

PMBCL is often treated with R-CHOP, a regimen that includes four chemotherapy drugs and the targeted therapy Rituxan (rituxumab), administered by mouth and by IV infusion. Some patients may also receive radiation, stem cell transplants, the immunotherapy Keytruda (pembrolizumab) or the new CAR-T therapies Kymriah and Yescarta.