Two patients waiting to be seen inside the man cave. Courtesy of Mount Sinai Department of Urology

A Man Cave Could Save Men From Prostate Cancer

Transforming doctors’ offices into man caves could help make men feel more at home and take control of their health.

It has been said and proved that men are less likely than women to take stock of their bodies or health. What’s more, they are likely to die five years earlier than their female counterparts. But a new unique patient care model known as Man Cave Health is hoping to change that, especially among those at risk for prostate cancer, reports ABC7NY.

In 2015, a blood test during a routine doctor visit revealed that Milana had a high PSA, or prostate-specific antigen. After undergoing a series of tests, Milan was diagnosed with prostate cancer. (According to the American Cancer Society, more than 2.9 million men in the United States are living with or have survived prostate cancer. It’s also the second leading cause of cancer death among this population.)

Following his diagnosis, Milana realized how difficult living with a cancer diagnosis can be and noticed that there weren’t many resources available outside of the internet addressing men’s health.

The first Man Cave was unveiled at Mount Sinai Health System’s urology practice in New York City earlier this year, and five more are in the works. The goal is to eventually roll out the model across the country.

“If we can convince even a small percentage of the male population to go to the doctor more regularly, get their PSA tested annually, know their numbers—then we’ve hit a home run,” said Milana on Man Cave Health’s website. “If more men talk about their health concerns, then more men will follow through with annual tests such as the PSA, and more men will live longer.”

As for Milana, ABC7NY reports that he had successful robotic surgery five months after the appointment that led to his cancer diagnosis and has been cancer-free ever since. 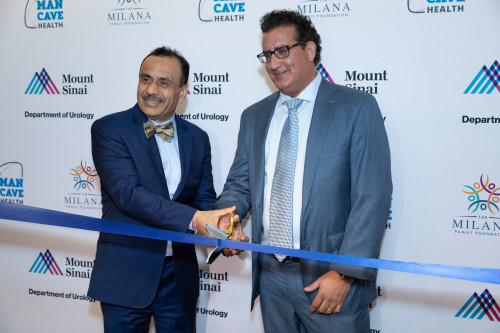 Click here to read about how a baseball broadcaster brought his career and advocacy together to educate men about early detection of prostate cancer. Also check out “World Cancer Day: Experts Call for Urgent Action to Improve Early Detection.”