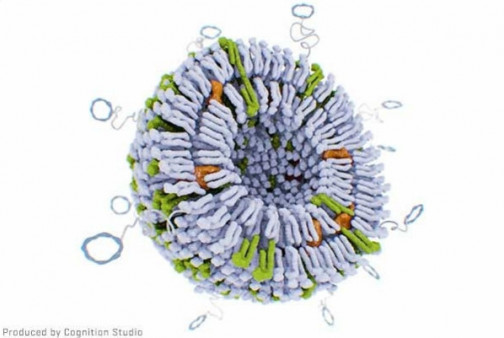 Researchers studded the surface of the liposome nanoparticles with circular, lasso-like tumor-targeting molecules that helped pull the nanoparticles into the tumors. The nanoparticles slowly released the drugs (in green and orange) as they disintegrated. Image courtesy of the Stephan Lab / Fred Hutchinson

In immunotherapy, the CAR T cells that square off against cancerous tumors face quite the Goliath: billions of tumor cells that have recruited healthy cells to help them repel an immune attack. But scientists at Fred Hutchinson Cancer Research Center have developed an inexpensive way to make tumors temporarily vulnerable. In recent work published in Cancer Research, the team used biodegradable liposome-based nanoparticles to carry immune-boosting drugs directly to solid tumors and open a window for CAR T cells to be more effective in preclinical models of breast and brain cancer.

The ability of specific immune cells to find and kill tumor cells underlies the new wave of immunotherapies approved to treat cancer. CAR T cells, short for chimeric antigen receptor T cells, have been engineered to express a synthetic receptor they use to seek out and destroy specific cells. Two CAR T-cell therapies are already Food and Drug Administration-approved for treatment of certain types of leukemia and lymphoma, also known as liquid tumors. Engineered cells for solid tumors, such as breast cancer, are on the horizon.

But solid tumors erect many barriers to immune attack. For example, they recruit specialized cells that tamp down the immune system. Instead of rallying the immune troops, these cells talk them out of any coordinated attack, keeping the cancer safe. Stephan and first author Fan Zhang, PhD, wanted to remove this barrier and make tumors more vulnerable to T cells. They also envisioned a strategy that would concentrate immunotherapy at tumors themselves.

Solid tumors are, by their nature, clumps of cancer cells in specific organs or tissues. Despite this, treatments are often given as pills or IV infusions that circulate throughout the body — and trigger toxic systemwide side effects as well. Drugs that boost the immune system from head to toe have similar problems. Too often, systemically administered therapies are both too weak and too strong: too weak inside the tumor but too strong elsewhere in the body.

“If you give them intravenously, you don’t get a therapeutically relevant dosage at the tumor site,” Stephan explained. “And you get systemic disruption of the immune system, which leads to dose-limiting toxicities.”

Concentrating therapies at the tumor would flip this balance, increasing effectiveness at the tumor while reducing effects in other areas. To achieve this, Zhang and Stephan started with liposome nanoparticles, miniscule fat-based bubbles. Liposomes are cheap, non-toxic, easy to manufacture and already FDA-approved to carry other cancer drugs, such as the breast cancer chemotherapy doxorubicin.

The researchers studded the liposome nanoparticles with a targeting molecule that helps them get pulled inside tumors (but not tumor cells). Once there, the nanoparticles slowly release the drugs inside as they disintegrate.

Stephan and Zhang loaded the nanoparticles with two drugs that would pave the way for CAR T cells. One mutes the specialized cells that talk T cells out of attacking the tumor. The second drug activates a type of immune cell that not only attacks cancer cells, but also orchestrates a larger anti-cancer offensive. Previously, the second drug, a derivative of a molecule called alpha-GalCer, had been tested against cancer. But when given systemically, alpha-GalCer caused general inflammation that outweighed its potential benefit.

Used together and concentrated within tumors, the two drugs would amplify each other’s effects — and the effect of CAR T cells.

“We’re removing the brake and stepping on the gas pedal [of the immune system],” he said.

The researchers tested the tumor-targeting, drug-carrying liposomes in a preclinical model of breast cancer. The nanoparticles caused few side effects and actually triggered tumor shrinkage all on their own, but the tumors eventually rebounded.

“We found we basically have a two-week therapeutic window where the tumor’s at the weakest position possible,” Stephan said.

Next, Zhang and Stephan tested whether the nanoparticles could improve the effects of CAR T cells in a preclinical model of breast cancer. They administered nine doses of nanoparticles over three weeks and infused CAR T cells at the beginning or end of the three-week window.

When infused without nanoparticles, CAR T cells engineered to seek out breast tumors had little effect.

Infusing CAR T cells at the beginning of the three-week nanoparticle window improved survival by 17 days but didn’t lead to any cures.

But when the team administered nine doses of nanoparticles over three weeks before infusing the CAR T cells, the results were dramatic. Of eight mice tested, tumors were cleared in four of them. In the other four, the tumors shrank and survival doubled (compared to mice that received CAR T cells but no nanoparticles). Survival also more than doubled in similar experiments in a model of brain cancer.

A general boost to cellular immunotherapy

The specific drugs that the team loaded into the liposome nanocarriers are just two possible examples, Stephan said. The same outcome — giving the immune system a leg up while removing its highest hurdles — could be achieved with different drug combinations. Getting this strategy to the clinic will require an industry partner willing to produce the liposomes and license possible drug options for use in its CAR T clinical trials, he said.

And though Stephan and Zhang tested their strategy with CAR T cells, it’s not limited to this use, Stephan noted. Other types of T cell-based immunotherapies in development, including certain cancer vaccines and molecules designed to link T cells with cancer cells, may also work better in solid tumors made vulnerable with similar nanoparticles.

Whether the strategy also gives patients with cancer a two-week window, or a different timeframe, would need to be ascertained in clinical trials, explained Stephan. The idea is to give “a cancer patient ... a therapeutic window where really any kind of T cell-mediated therapy could work much better than if you don’t precondition,” he said.

A grant from the National Cancer Institute, institutional support from Fred Hutch’s Immunotherapy Integrated Research Center and private support from the Bezos family supported this work.

This article was originally published on July 2, 2018, by Hutch News. It is republished with permission.