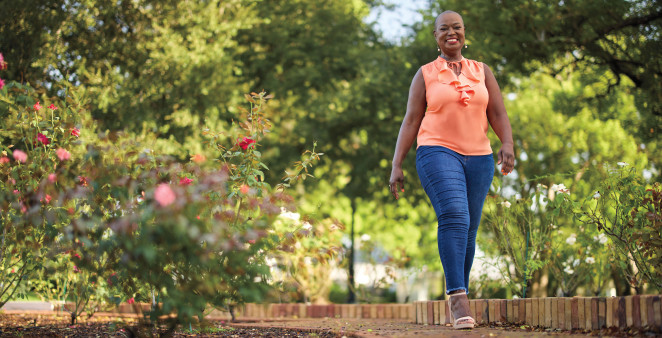 Fully six months into her second pregnancy, in November 1998, Terlisa Sheppard felt a lump under her arm. Her doctor suggested that her milk ducts might be clogged. To allay any concerns the 31-year-old might have, he promised to order a mammogram right away and another after she gave birth. Sheppard’s regular checkups had been stellar, so she wasn’t really worried. “But we never got to the second mammogram,” she says. “My breast surgeon did the biopsy. I had Stage III breast cancer.”

As Sheppard wondered what could have caused her cancer, she also worried about how it would affect her 2-year-old daughter, Alexis, and her precious baby-to-be.

Three years prior, Sheppard, an accountant for the Department of Defense, had relocated to scenic Orlando from Maryland. “I loved being around water,” she says. “That’s not so hard here because there’s water everywhere.”

Doctors told her that her cancer was “very aggressive and the pregnancy was feeding it like wildfire,” she says. “They recommended I deliver the baby six weeks early and start treatment right away.”

Sheppard began four cycles of a chemotherapy drug combination commonly used to treat localized breast cancer. This was followed by four cycles of an alkaloid medicine to shrink the tumors as much as possible prior to a combination surgery to remove and reconstruct her breast.

“It was July 1999, and the surgery went well,” Sheppard says. “Then I was back at work and doing radiation at the cancer center during my lunch break.”

But life would soon snatch away the job Sheppard so loved, and she’d be beset by pain and uncertainty about whether her girls would be left motherless. Her health problems were only just beginning.

In the spring of 2001, Sheppard experienced back pain. Her doctor diagnosed a bladder infection and prescribed a course of antibiotics, which Sheppard completed. But her pain persisted. “I wasn’t due to see my medical oncologist until that December,” she says. “Then it just dawned on me that the cancer had come back.”

Sheppard called her oncologist, who told her to come in for some scans. Accompanied by her mother, husband, sister and brother-in-law, she received the test results in the doctor’s office. One of 10 siblings in a close-knit family, Sheppard knew her loving support group would spring into action. “Every time I would go to the doctor, I had family members either flying or driving to Orlando to be with me,” she says. 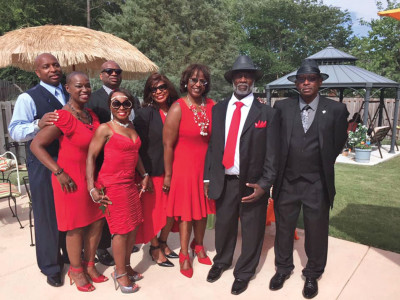 This time, Sheppard learned she had Stage IV metastatic breast cancer (MBC). In tears, her oncologist called it “terminal cancer,” held her hand and told her to go home and get her affairs in order.

At this point, Sheppard was about 15 years into her career with the federal government and requested early retirement. “My sisters came to get things out of my office,” she says. “In my mind, I knew I wasn’t going to give in; I was getting ready to start fighting this thing. Whatever it was that I needed to do, I was going to do it!”

Once again, Sheppard thought about her kids. Her youngest, Alyah, was 3 years old, and Alexis was 5. To them, nothing was amiss. Even with a shaved head, Mommy was still the same positive, bubbly, high-energy force at the center of their world. 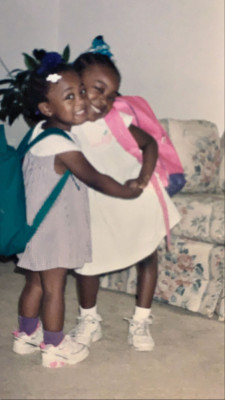 The two girls would excitedly accompany her to treatment at the cancer center. They especially looked forward to Thursday tea time, when the staff served desserts along with freshly brewed teas in teacups donated from all over the world.

Sheppard started a scrapbook chronicling her ordeal so that her daughters could learn about her cancer journey directly from her.

In January 2002, she developed a blood clot in her lung that landed her in the hospital for an entire week. Her oldest daughter visited and stayed overnight. “I remember her crawling up in the bed alongside me,” she says.

This time, doctors put Sheppard on weekly infusions of the alkaloid drug she’d taken when she was first diagnosed with cancer. Her white blood cell count dipped drastically. “I refer to 2002 as my year from hell,” she says. “I had to start getting injections on Tuesday, Wednesday and Thursday to counteract this side effect. Friday was sort of a recuperation period, then I’d be back at the cancer center for treatment the following Monday.”

At home, as she prepared for the week ahead, Sheppard would gaze at a pond through an open window as she applied her makeup. “My mom would cook all types of vegetables, and I ate very well, and my young sister-in-law helped out with my daughters,” she says. “Even though I was so weak that I couldn’t go out, it gave me life to look outside, see my daughters thriving and my family being there supporting me.”

Sheppard developed cancer lesions that caused pain in her abdomen and spine, for which she received radiation treatment. “Then, just a year later, in August 2003, I was diagnosed with brain metastasis,” she says. “At that point in my life, this didn’t beat me down like some people would have imagined. Again, I thought about my daughters and was determined not to give in, so I gave it my all.”

Doctors advised Sheppard that she needed stereotactic radiosurgery, a minimally invasive operation, right away. “My mom, oldest sisters and a brother—who had been working out of the country and flew in—assembled for a nine-hour procedure,” she says. “It was very taxing on my family—probably more so than on me because I had been going through all of these different diagnoses and cycles of treatment. I kept trying to hold it together for them.”

That year, Sheppard lost at least 50 pounds. She needed a blood transfusion. “I wasn’t eating normally, so I started juicing, and that really helped bring my appetite back to where it needed to be,” she says.

Sheppard also enjoyed backup from her former coworkers and neighbors who dropped off bags of groceries and juicing supplies. Their assistance crystallized the importance of community support for cancer survivors.

During the next few years, as Sheppard watched her daughters grow into adolescence, the routine treatments she underwent stabilized her cancer and helped her push through the daily aches and pains associated with metastatic disease. She enjoyed going to the beach with them, cooking together and marveling at Orlando’s gorgeous sunrises and sunsets as a family.

Giving Back: The RV Adventures

Several years later, Sheppard discovered the national nonprofit Living Beyond Breast Cancer (LBBC), reaffirming her connection to the cancer support community. “This was in 2014, the same year that my oldest daughter graduated from high school. I knew about a few organizations, but at that point, I was divorced and wanted to push everything into their lives that I could to help them get through,” she says. “When I went to that first breast cancer conference and started learning different techniques to manage cancer and information that I could take and give to someone else, that boosted my spirit again.”

Later, Sheppard learned about METAvivor, an organization for men and women living with MBC. “We had an RV that I have driven all over the country, from Colorado to Seattle,” Sheppard says. “We would drive to different locations to give out pamphlets and talk to other survivors and family members.”

Now 22 and 24, Alyah and Alexis joke with their mother about these RV adventures. But the young women understand their mother’s deep commitment to her calling as a volunteer. “I live my life day by day and doing as much as I can for everyone that I can,” Sheppard says. “Organizations like METAvivor have propelled me forward. When you’re busy trying to help others negotiate their problems, you don’t have much downtime to think about your own troubles or have a negative attitude.”

As a METAvivor board member, Sheppard attends events and shares her experiences with young mothers she meets who have MBC. “When I was first diagnosed with metastatic breast cancer, I wasn’t expecting to see my daughters graduate from elementary school,” she says. “This is why I’m not going to sit idly by and not try to encourage and support the next person.”

Eventually, Sheppard’s passion for advocacy earned her the nickname “Mother Terlisa.” “I was always just that nurturing type, even before I had my own daughters, and I’ve been that way in the community for the younger survivors and mothers because I’ve been there and can relate to being diagnosed with MBC that young while pregnant,” she says. “I feel and have always felt a sense of protection and wanting to be there for others on this journey.”

One recipient of Mother Terlisa’s love was Julia Maués (see “Connections”), who, like Sheppard, was pregnant when she was diagnosed with MBC and brain metastasis in 2013, at age 29. Her doctor had told her about Sheppard, but the two women didn’t meet in person until an LBBC conference in 2018. They hugged and Maués cried. She told Sheppard that she sometimes wondered whether she was a myth!

“She said, ‘I am very real! And the baby I was carrying when I was diagnosed is now a college student, and she is here!’” Maués recalls. “So I met Alyah as well, and that was a happy day!” 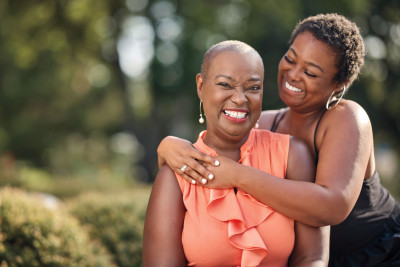 Keep On Keeping On

Earlier this year, Sheppard underwent another surgery—a craniotomy—to remove scar tissue that formed after her stereotactic radiosurgery procedure. Her brain had swelled, which triggered unbearable headaches. She asked her sister to take pictures of her after the operation to add to the scrapbook.

“It’s a part of my journey, and there’s something about sharing your story through pictures and journaling and what it can do for the next person. I use it as a tool to talk to other cancer survivors,” Sheppard says. “Plus, my daughters grew up in that scrapbook!”

When Alyah was diagnosed with COVID-19, the two  were living together. “So I had to take care of my daughter and also protect myself in the house, and I did it,” she says, recalling this scary time. “So far, I’ve been doing very well. I’ve gotten vaccinated against the coronavirus, and, at this point, I just keep going. I haven’t let all these diagnoses of breast cancer stop me. I’m going to go until I can’t go anymore!”