Parsing the Deadliness of Prostate Cancer

Fred Hutch researcher zeroes in on biomarkers to better predict aggressive form of the disease.

Biological markers that predict aggressive cancer — that is, the kind that will kill you — have become a bit of a holy grail, especially in prostate cancer.

That’s because these cancers are not all the same. Some are extremely aggressive: They can and do kill, even men in their 40s. Others are slow-growing and only become a concern when they’re detected through preventive screening. These cancers, often referred to as indolent, don’t kill: Men die with them, not of them.

But science hasn’t been able to reliably tease apart which prostate cancer is which, so patients basically roll the decision-making dice with their doctors and choose either invasive treatment, along with its considerable side effects, or active surveillance. As a result, some cancers are overtreated — causing unnecessary suffering to the patient — and others are undertreated, leading to the patient’s death.

Genome-wide association studies (GWAS), i.e., studies that look at the association between genetic variants and a trait or human disease, have identified over 100 inherited variants (or mutations) associated with prostate cancer risk. Other studies are looking at blood, urine and tumor tissue for biological markers that can predict exactly who’s prone to aggressive disease. But many of these biomarkers haven’t been validated through large studies and so are not widely used in the clinic.

Janet Stanford, PhD, a longtime epidemiologist with Fred Hutchinson Cancer Research Center and member of the Program in Prostate Cancer Research, is hoping to change that.

In late June, her team published the latest in a series of studies pinpointing and then validating a clutch of blood and tumor tissue biomarkers that, she hopes, will in time enable men and their doctors to better predict if a prostate cancer is likely to be lethal or lazy.

“We know there’s a subset of men diagnosed with local-stage prostate cancer who go on to develop and ultimately die of metastatic disease,” she said. “We’re trying to find biomarkers that would tell us how we can better stratify that subset and treat them aggressively and monitor them more closely for early evidence of relapse.”

“We’re trying find something that has more predictive power than what’s currently available,” she said. “We’ve been trying to develop the tissue biomarkers to be complementary and add value to the Gleason score.”

The search for a better biomarker

The Gleason score, named for the man who created it, is currently the go-to measure for determining the aggressiveness of a prostate cancer tumor.

“The pathologist looks at the tissue under the microscope to see the architecture of the cells and the more disorganized and deranged the cells are, the higher the Gleason score,” said Stanford. “It’s a tried-and-true pathological marker of disease aggressiveness.” 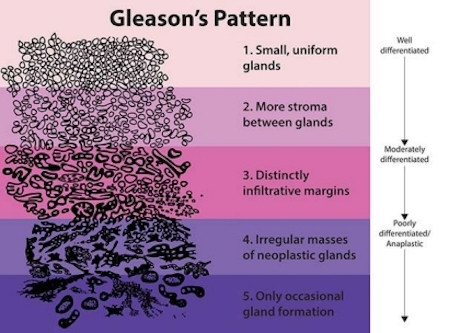 But the Gleason score, first developed in the 1960s, could use improvement, especially when it comes to men whose prostate cancers fall within its hazy intermediate range.

Toward that end, Stanford and colleagues have for the last few years been hunting down three different types of biomarkers that might reveal the most aggressive prostate cancers:

First, Stanford and colleagues looked to the DNA code itself.

The team studied the blood, tissue and medical records of prostate cancer patients treated with surgery to ascertain which patients developed metastatic disease and died, and which patients remained cancer-free and survived. Scientists had been gathering data for more than 20 years on some patients in the cohorts Stanford and her team used, providing the researchers with ample data to figure out who fell into which category.

In a 2011 paper published in the journal Cancer Epidemiology, Biomarkers and Prevention, Stanford and her team identified and then later validated, via a large international cohort of over 12,000 patients, a handful of inherited single-letter changes in the blood of men with prostate cancer that were somewhat predictive of whether that man’s cancer was likely to prove lethal.

So Stanford and her team went looking for biomarkers that packed more of a prognostic punch.

They analyzed prostate tumor tissue from early stage patients who’d had prostate surgery to see if they could find additional “tells” caused by epigenetic changes — modifications to DNA driven by external or environmental influences. These modifications don’t change the DNA’s sequence but do influence how genes are turned on or off, or expressed.

“We looked at tumor DNA methylation and gene expression profiles to see if we could find the signatures, if you will, of aggressive disease,” she said.

Epigenetic changes can be triggered by methyl groups latching onto a gene (or genomic region) at sites called “CpGs,” where they’re not normally found, or being removed from sites on a gene where they normally reside. Abnormal DNA methylation also results in defective gene expression: either in one direction (gene silencing) or the other (gene activation). And that can lead to an altered level of the resulting proteins that mediate tumor aggressiveness: another pathway to lethal prostate cancer.

“We’ve been working with different types of tumor tissue-based biomarkers,” she said. “Right now, we have developed a panel of [gene expression markers, mRNAs] that look very promising for predicting metastatic-lethal events and we also have validated a panel of aberrantly methylated DNA sites that look very promising for distinguishing patients with aggressive prostate tumors.”

In January 2017, Stanford and colleagues published initial findings regarding the biomarkers of aberrant DNA methylation they found to be associated with metastatic progression. She and her team then set about further confirming their results and determining the usefulness of these prognostic biomarkers.

The Gleason test gets tested

In her latest paper, published in June in the journal Prostate, her team compared the panel of aberrantly methylated DNA sites (known as CpGs) with the Gleason score determined using tumor tissue removed at surgery.

“We’re getting a much higher, significant improvement in the ability to predict disease aggressiveness at higher sensitivity using our DNA methylation score than what Gleason alone would give you,” said Stanford. “It’s looking like it’s going to be a better test for stratifying patients with potentially lethal tumors.”

According to their research, over 25 percent of the patients in their validation study (six men) had been misclassified as low risk using Gleason score alone.

As Stanford put it in her paper, a combined test could be “particularly relevant for those patients who may be misclassified as low risk based on Gleason alone and forego potentially life-saving adjuvant treatment.”

Novel tests on the horizon?

Currently, there are no DNA methylation biomarker tests available to predict disease aggressiveness. There are a handful of gene expression tests, she said, some of which have received FDA approval, but, “they’re not perfect, and there is room for improvement.”

Stanford, who’s been focused on prostate cancer research ever since her father was diagnosed with the disease 25 years ago, is currently writing up results of her team’s validation analysis of their mRNA biomarkers to devise a novel gene expression score test, which she said would be “simpler and less expensive” compared to currently available gene expression tests.

“Current mRNA panels have from 17 to over 40 different transcripts, but we’ve been able to get it down to four,” she said. “A test with four mRNAs should be cheaper to perform and easier to interpret than a test that measures many more.”

That could make such a test more widely available and used to help guide patient management.

Fred Hutch, in fact, recently signed a licensing agreement with the China-based precision medicine firm Anchor Dx, to do just that.

“The idea is to combine different types of biomarkers under the theory that they may capture different aspects of disease biology better than a single type of biomarker,” she said.

Not quite ready for primetime

In theory, a test like the one Stanford envisions would also allow those with no markers for aggressive disease to skip treatments that often come with extensive side effects: think erectile dysfunction, urinary incontinence and bowel dysfunction.

And there’s more potential good news. While Stanford and her colleagues used tumor tissue from surgical specimens to identify and validate the prostate cancer biomarkers, she believes eventually they may be able to predict the aggressiveness of the cancer with biopsy tissue alone.

“If the test works in radical prostatectomy samples, there’s no reason why you couldn’t measure them in biopsy tissue,” she said. “With biopsy tissue, there’s not enough tumor to do the initial discovery and validation work. But once you know what you’re looking for, you should easily be able to adapt it to a test that could be done with biopsy tumor material. That’s part of what the next clinical utility study will address.”

Stanford cautioned all of this will take time and resources to come to fruition — perhaps as long as five years — but that it should eventually result in better outcomes for these patients.

“My father was diagnosed at 65 and was cured by his surgery,” she said. “But it took years of younger men being diagnosed with the disease to call attention to the fact that it’s not just a disease of older men and indeed, it is actually the second leading cause of cancer mortality in men.

“It’s been a long road, but we’re making a lot of progress now. It’s been phenomenal to watch the development of the field.”

This article was originally published on September 4, 2018, by Hutch News. It is republished with permission.