Toxic substances found in many common household items—pizza boxes, new shoes, even carpet treatments—could stay in the body and the environment and increase our chances of developing cancer, cautions an international group of scientists. The researchers published a warning letter in Environmental Health Perspectives that was signed by 200 scientists from 38 different countries, The New York Times reports.

The warning targets chemicals called polyfluoroalkyl and perfluoroalkyl, or PFASs, which are contained in thousands of products worldwide, including electronics, footwear, tents, protective rain gear and even fire extinguisher foams.

According to several recent studies, PFASs appear to linger in people’s bodies for years and seem to increase the risk of cancer and other health problems. Years ago, DuPont stopped using certain PFASs to make Teflon goods because of these risks. But now scientists said the entire class of chemicals are suspect and require more study to ensure their safety.

“Research is needed to find safe alternatives for all current uses of PFASs,” wrote Linda Birnbaum, PhD, of the National Institute of Environmental Health Sciences, in a commentary on the report. “The question is, should these chemicals continue to be used in consumer products in the meantime, given their persistence in the environment?"

Representatives from the chemical industry, including some from DuPont, vehemently denied the scientists’ contentions and said these PFASs are safe. But until more long-term tests are done that assure these chemicals are safe, environmental health specialists advise consumers to avoid products containing the chemicals “whenever possible.”

PFASs aren’t the only potentially dangerous chemicals you must guard against in your food containers. Click here for more information about BPAs, compounds found in everyday stuff we use, that may also cause cancer. 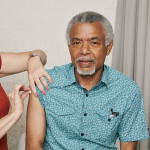 Are Coronavirus Vaccines Safe and Effective for People With Cancer?