Channing Tate, PhD, MPH, is accelerating her community-building research with support from the CU Cancer Center.

March 30, 2022 • By Rachel Sauer at the University of Colorado Cancer Center

While conducting research for her doctoral dissertation, Channing Tate, PhD, MPH, spoke with 144 older Black adults about hospice care – what they knew about it, whether they’d consider it, what their experiences with hospice had been.

One participant thought hospice was created by the Ku Klux Klan. Another participant, a nurse, mentioned believing that all Black people are allergic to morphine.

And another participant, a woman in her 40s, shared a narrative about her mother seeking treatment for breast cancer only after her breasts were visibly engorged with cancer. Her mother’s care provider theorized that she’d probably had untreated cancer for 20 years, but because the woman’s mother died two days later in hospice care, she felt that hospice killed her mother.

“The good thing about my dissertation was it included an education component, so once people fully understood what hospice is, they were like, ‘Oh, that’s a good thing’,” Tate says. “It showed me that there’s opportunity for change.”

Focusing on the next cancer leaders

“We created the Rising Star position to ensure we could attract the very best talent and diversify the research faculty,” explains Cathy Bradley, PhD, MPA, deputy director of the CU Cancer Center. “Top talent is required to lessen the burden of cancer for all people.”

A goal of the Rising Star positions is to support researchers from traditionally underrepresented populations in each of the Cancer Center’s four research programs.

These opportunities will support up-and-coming researchers who are doing groundbreaking work, with funding directed toward ensuring that the CU Cancer Center is competitive with larger cancer centers and able to retain top future cancer leaders in Colorado.

“The research that Dr. Tate is pursuing is so vital to our community and nationally,” Bradley says. “Her findings and insights will lead to reducing disparities through research and education. She has a daunting task but is well-suited for the challenge. With the Rising Stars program, the CU Cancer Center is supporting her research. With our commitment to mentorship, the Cancer Center is ensuring her success. The Rising Star positions allow us to attract talent, experience, and expertise to eliminate the burden of cancer everywhere.”

The Rising Star support highlights the CU Cancer Center’s commitment to ensuring that diversity, equity, and inclusion are reinforced in research, and that members of traditionally underrepresented communities gain opportunities to do groundbreaking cancer research. Tate is the first of hopefully many future cancer leaders to hold the Rising Star title at the CU Cancer Center.

“I feel very blessed to have this Rising Star position and, being a CU Cancer Center mentored member, access to some of the best mentorship in the country,” Tate says. “This opportunity is helping me become a better investigator to build and launch my research career. My dream is that the research we do, the tools we create, become the gold standard for how this work is done at a national level.”

Building relationships in the community

Education has been key to opportunities that Tate has pursued throughout her life. Her parents moved from Ohio to Colorado so her father could study at CU-Boulder, a path previously charted by her uncle, Penfield Tate, the first Black mayor of Boulder.

As the youngest of five sisters, Tate says her parents emphasized for each of their daughters that college was a given, not an option. After earning her bachelor’s degree at Xavier University in Ohio, she worked in biotech before enrolling in the Colorado School of Public Health to earn her MPH. She pursued her PhD in health and behavioral sciences at CU-Denver. 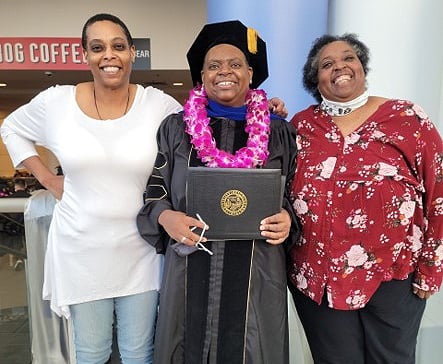 Through her educational journey, her research has focused on health disparities, aging populations, hospice and end-of-life care transitions, and shared decision-making. As a Colorado native, she has a particular interest in building relationships with Black and other traditionally underrepresented populations throughout the state.

“Something that informs the relationships with members of the Black community in Colorado is that very, very few are native to Colorado,” Tate says. “A lot of people moved here because they were in the military or for jobs, and you’d be surprised how many Hurricane Katrina refugees live in the Denver area. So, there are people in this state who grew up picking cotton in Mississippi, who grew up under Jim Crow and under segregation.”

Before beginning her doctoral research, Tate spent three years building relationships with members of the Black community – having conversations with church groups and community groups, even bridge clubs, “so that people would know I’m authentic, I’m wanting to engage, I’m looking to build partnerships in this process,” she explains.

One of the most significant issues that Tate has encountered in her research is the issue of disenfranchisement and disconnection with the health care system among traditionally underrepresented communities. She has met people whose only health care in childhood was the polio or smallpox vaccine, and who possess an acute awareness that “the Tuskegee Experiment only ended because it was exposed, not because anybody developed a moral compass,” Tate says.

That understandable mistrust extends to accessing, or even knowing about, end-of-life care, as well as preventative care and screenings for treatable cancers.

“My father had dementia but ultimately died of lung cancer,” Tate says. “So many people in my family have died of lung cancer, not knowing that lung cancer is screenable and treatable. That’s why building relationships, building partnerships with the community in health care, is so important because we’re establishing a foundation for education ­– about screenings, about cancer prevention, bridging the knowledge gap.”

Tate says she also wants to work toward closing the knowledge gap about end-of-life health care and hospice. She experienced it when, while she was earning her MPH, her mother was diagnosed with and died of a recurrence of breast cancer.

“I saw how negatively her family reacted to her receiving hospice care,” Tate says. “They accused us of killing her, and those myths about hospice are very pervasive.”

Choosing projects that will be the most helpful

With the Rising Star support, Tate says she is looking forward to mentorship from Cancer Center members in her further research relating to health disparities, aging, shared decision making, and end-of-life care.

One of her current projects is convening a community advisory board to help guide what images and languages should be used in educational materials designed to help people access health care and get to clinics, particularly for cancer screening and care.

“As a Black woman who grew up in Colorado, I do feel a responsibility to everyone who went before me to do the most help possible,” Tate explains. “That is my duty and my privilege, so I only take on research projects that are going to have some meaningful impact.”

This story was published by University of Colorado Cancer Center on March 25, 2022. It is republished with permission.