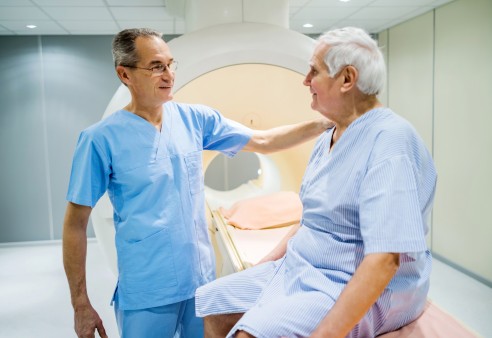 The model, which is not yet ready for prime time, recommends some people at high risk to start screening as early as age 40 and some at low risk to wait until their 60s. Istock (Model(s) used for illustrative purposes only)

Public health researchers at Fred Hutchinson Cancer Research Center have drafted a roadmap of sorts for the future use of precision screening in detecting colorectal cancer.

Current screening guidelines recommend people at average risk get a colonoscopy, sigmoidoscopy or other test starting at age 50. The new approach, based on a risk-prediction model, is much more nuanced; less one-size-fits-all. It uses individual risk factors and genetic data to determine when someone should start screening for colorectal cancer, the third leading cause of cancer death in the U.S.

The model, which is not yet ready for prime time, recommends some people at high risk to start screening as early as age 40 and some at low risk to wait until their 60s.

“A roadmap is definitely what we’re laying out,” said Fred Hutch epidemiologist Ulrike “Riki” Peters, PhD, MPH, shared senior author of the study, published last month in Gastroenterology. “We have a very solid approach in showing how we can integrate environmental, lifestyle and [inherited] genetic data to predict risk.”

“It was a long road to this point and it will be a long road to go to the next point,” said Hsu, a biostatistician in Fred Hutch’s Public Health Sciences Division. “But it’s exciting. We’re trying to project risk for developing this cancer more precisely so that we can make more accurate recommendations for each individual.”

The team of epidemiologists and biostatisticians, which included former Hutch researcher Jihyoun Jeon, PhD, (now at the University of Michigan), used patient data from several colorectal cancer studies conducted between 1992 and 2005 that are part of the Genetics and Epidemiology and Colorectal Cancer Consortium (GECCO) and the Colorectal Transdisciplinary study (CORECT).

All told, data from about 20,000 people — roughly half with the disease and half without — were used to build and validate their risk-prediction model. The model used family history of disease; lifestyle and environmental risk factors and genetic variants associated with the disease to determine colorectal cancer risk.

Based on their findings, the one-size-fits-all initial screening age of 50 is either too early or too late for many.

Findings for women were similar. Women with colorectal cancer in their family as well as high environmental, lifestyle and genetic risk were recommended to start screening four years earlier, at 46; those stratified to the lowest 10 percent of risk, even with a family history, could wait until they were 59.

“We hope to provide more accurate risk stratification for colorectal cancer based on a person’s risk profile,” said Jeon, first author of the study. “Our model, which is based on detailed individual risk factor information, can serve as a first step toward developing personalized prevention strategies for this cancer.”

Breaking down the risks

Unlike many cancers, colorectal cancer is (largely) preventable, treatable and beatable. Also unlike many cancers, this cancer’s most effective screening test — colonoscopy — is also a preventive treatment. Polyps and precancerous lesions are removed during the test and the patient sidesteps the cancer.

“Colorectal cancer is a special cancer,” said Hsu. “Most colorectal cancers are thought to start with polyps and move through the stages — advanced adenoma and then to tumor. If we can intervene in the process in the early stage, treatment or even prevention can be much more successful.”

Since rates of colorectal cancer in people under age 50 have increased substantially in the last few decades and current guidelines only recommend earlier screening for those with a first-degree relative with the disease, the researchers believe their risk-prediction model could help capture some of these younger people at high risk.

What puts people at risk for colorectal cancer?

The researchers used 19 evidenced-based lifestyle/environmental risk factors in their model, including many of the usual suspects: smoking, alcohol consumption, physical activity and diet, particularly the consumption of processed and/or red meat (both put you at risk for CRC).

Additional factors included body mass index, or BMI; education level; history of type 2 diabetes; use of postmenopausal hormones; regular use of NSAIDs or aspirin (these drugs have been found to protect against CRC in some people); and the consumption — or lack thereof — of fruits, vegetables, fiber, calcium and folate.

The team determined genetic risk scores by looking at a total of 63 small genetic variations at 49 known colorectal cancer loci previously identified by genome-wide association studies conducted by cancer research consortiums such as such as GECCO, CORECT and others.

As it turns out, environmental and lifestyle risk factors were every bit as important as inherited genetic variations associated with colorectal cancer.

“Genetics you can’t change,” said Peters. “But people can look at the risk factor profile that they know — environmental and lifestyle — and try to reduce them. And do screenings as recommended. That’s definitely a way to substantially reduce your risk.”

Not ready for prime time ... yet

All three researchers agreed that this risk-prediction model is merely the first step.

For one thing, the model they created was based on people of European ancestry, i.e., Caucasians, since that group was much larger in the studies they analyzed.

“At the beginning, we were not as advanced as to understand how to analyze multi-ethnic populations,” said Peters, who put the project in motion about a decade ago. “We’re much better set up now. We have better understanding and statistical methods to do this and we’re very eager to expand.”

Their next step will be to create risk-prediction models that include genetic variants for other ethnic groups, such as African-Americans, Hispanics, Asians and Native Americans. Each risk model will differ slightly since each ethnic group has different genetic risk factors, Hsu said.

“This is a very important point,” Peters said. “It’s really important to validate and evaluate this model in other ancestral [or ethnic] groups. Our model needs to be fine-tuned and it needs to be evaluated in those groups separately.”

The researchers are aware that there are people who may want to DIY their own risk prediction model now, using commercial genetic tests, which have become more widely available.

It’s not that simple, Peters said.

“I can understand the frustration of an individual who might want to use genetic information right now,“ she said. ”But physicians are not trained on what to do with this information yet and public providers do not provide a genetic risk-prediction model. So that’s not the solution at this point.”

But it’s expected that genomic information will one day be included in the medical record, she said, and “precision prevention can be realized.”

Until then, people can embrace the science at hand — i.e., continue to follow current screening guidelines and work to reduce lifestyle and environment risks — and ready themselves for a screening sea change.

“We’re laying out a road map to move personalized prediction into the clinic and public health space,” Peters said. “We have a very solid approach in showing how we can integrate environmental, lifestyle and genetic data for risk prediction. And we don’t want to stop there."

In the future, Peters and her team hope to integrate additional genetic, biomarker and microbiome data to further improve the risk-prediction model for colorectal cancer — and other diseases.

“Once the genetic information is added to the medical record,” she said, "it can be used to screen for many common, complex diseases — other cancers, cardiovascular disease, type 2 diabetes and more.”

This article was originally published on March 15, 2018, by Hutch News. It is republished with permission.