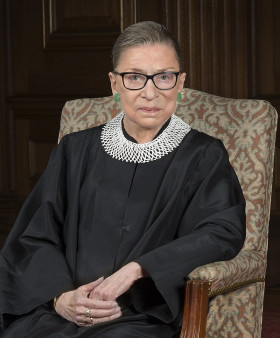 Lung tumors were detected at an early stage after the justice broke her ribs in a fall.

Because the tumors were caught early, Ginsburg was able to undergo a pulmonary lobectomy, or surgery to remove a portion of her lung, according to the Washington Post. The surgery was performed by Valerie Rusch, MD, at Memorial Sloan Kettering Cancer Center in New York City.

The operation appeared to remove all of the cancer in her lung and scans showed no evidence of metastatic cancer elsewhere in her body, so no further treatment is planned, according to a Supreme Court spokesperson. If cancer is detected in her lymph nodes, she could receive chemotherapy. Targeted therapy and immunotherapy are typically used only if cancer has spread beyond the lung.

Ginsburg, the oldest justice at age 85, has previously faced cancer twice. She was treated for colon cancer in 1999 and for very early stage pancreatic cancer in 2009. Raja Flores, MD, of the Icahn School of Medicine at Mount Sinai told the New York Times that Ginsburg’s lung cancer may have spread from one of these sites. She lost her husband, Martin Ginsburg, to cancer in 2010. Ginsburg’s health is closely watched because her replacement by a conservative justice would further shift the court majority on issues like reproductive choice.

Lung cancer is the third most common cancer and the leading cause of cancer death in both men and women in the United States. News reports have not revealed what type of cancer Ginsburg had, but non-small-cell lung cancer accounts for around 85 percent of cases. Lung cancer usually affects older people, with an average age of 70 at the time of diagnosis, according to the American Cancer Society.

Lung cancer usually does not cause symptoms at early stages, and a majority of people are diagnosed after the disease has spread beyond the lungs. However, it may be caught early if a person undergoes medical testing for another reason, as was the case for Ginsburg and for lung cancer advocate Laura Greco (profiled in the Summer 2018 issue of Cancer Health), whose cancer was detected when she received scans to look for injuries after a car accident.

Like a growing number of women with lung cancer, Ginsburg did not smoke. About 15 percent of non-small-cell lung cancer develops in nonsmokers. In fact, lung cancer is estimated to be the seventh leading cause of cancer death even among nonsmokers.

The U.S. Preventive Services Task Force recommends that people ages 55 to 80 with a cumulative smoking history of at least 30 pack-years—for example, one pack of cigarettes a day for 30 years or two packs a day for 15 years—should receive annual lung cancer screening using low-dose computed tomography (CT) scans. However, a recent study found that only about 2 percent of people who meet these criteria have received the recommended imaging tests.