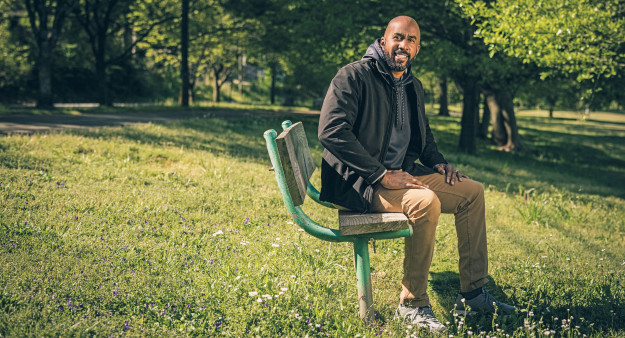 After treatment for multiple myeloma, Bryon Daily pays it forward to other African Americans, who are at higher risk for this cancer.

Five simple words. Yet they sum up a world of experiences and feelings that people often have upon looking back on their cancer diagnosis, especially a serious one. There’s a sense of disbelief, of being blindsided, followed by memories of all the doctors’ appointments, tests and treatments that mark the line between a former life and a new one that may feel like it comes with a looming end date.

For more and more people, however, treatments change the story, and there is indeed life after cancer: a different life. The experience may change you and what you consider important. Instead of trying to go back to the way things were, you may feel that it’s time to forge a new path.

Bryon Daily, 58, didn’t see it coming. In 2017, he was living in an Atlanta suburb with Lori, his wife of 26 years; his son, who was in high school; a daughter headed for college; and another daughter who had just completed college. Daily was working in business development and had a side gig as an entrepreneur; his wife was working for the government. He was very active and hit the gym at least three times a week. “I was pretty busy,” he says. “Everything was moving right along.”

The first inkling of a problem cropped up that summer, when routine lab tests showed an elevated protein in his blood and urine. His primary care doctor recommended that he see a urologist, who was unable to identify the cause.

That autumn, during a game of hoops with a bunch of younger men, Daily caught the ball the wrong way and jammed a finger. “I didn’t think about it too much because I’ve had similar injuries in the past,” he says. But when the finger didn’t improve after a couple of weeks, he went for an X-ray and learned he had a fracture.

The combination of the elevated protein and the fracture led Daily’s doctor to suspect something systemic, so he sent Daily to see the urologist again as well as a nephrologist (kidney specialist) and a hematologist (blood specialist). The nephrologist suggested that Daily see an oncologist. “Of course, I knew what that meant,” he says.

Daily and his wife were in their kitchen on the evening of January 25, 2018, when the oncologist called with his lab results. Daily had multiple myeloma, a form of blood cancer that attacks plasma cells, a type of white blood cell that produces antibodies to fight infection. Over the phone, the oncologist told him, “It’s a form of blood cancer that is incurable but treatable.” She went on to say that multiple myeloma is diagnosed in African Americans at twice the rate of the white population.

The Road to A Transplant

The oncologist discussed a treatment plan: chemotherapy, then a bone marrow transplant in August. It would be autologous—using stem cells from one’s own body instead of from a donor—which eliminates almost all rejection risk.

The first phase was chemotherapy to eradicate cancerous cells and make room for healthy ones to grow after the transplant. Daily went through six months of chemotherapy. For the last week prior to the transplant, a port provided access to a vein in Daily’s upper chest so that high-dose chemo, carried in a box strapped over his shoulder, could be delivered 24/7. He survived the fatigue, low energy, low appetite, nausea, acid reflux and other side effects by reminding himself that it was a temporary state. The transplant itself required just a two-night, three-day hospital stay.

During the early days of his treatment, Daily dived into research. “I ask a lot of questions, and I’ll get a second opinion in a heartbeat,” he says. “I hold professionals accountable. But I also feel appreciation—if doctors give me advice that makes sense, I’ll take it.” Thanks to a patient advocate at his oncologist’s office, he tapped into the Leukemia & Lymphoma Society (LLS) for educational resources as well as financial assistance, which helped Daily pay for hospital parking during his frequent appointments.

Throughout his treatment, Daily’s relatives leaned in to support him and one another. His eldest daughter returned home from Houston for a month, and a posse of friends and family rallied around. Daily felt fortunate and grateful as he witnessed the struggles of other cancer patients getting chemo who lacked the same level of support. 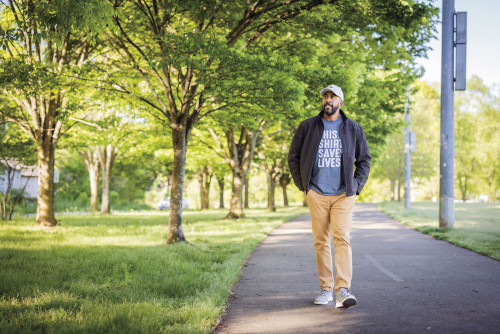 Post-transplant, Daily quarantined for 90 days because of his heightened risk for infection. It was the fall of 2018, well before the COVID-19 pandemic emerged, but the entire household had to wear surgical masks and gloves around him. “We had to wash all my fruits and vegetables and make sure that everything was completely sanitized in the house,” he remembers. The only trips outdoors were daily treks to the hospital, usually with his wife or daughter driving, for tests to make sure his recovery was on track.

Greasy foods were out. “I stayed away from fried chicken, pizza and all the bad stuff,” he says. Besides fruits and veggies, he enjoyed tuna fish and PB&J sandwiches, and he drank lots of water (and still does) to help his kidneys. Although they were impaired—a common side effect of the cancer—they are stable now, and he has been able to avoid dialysis.

A former college athlete—he ran the 400-meter relay for North Carolina State—Daily was eager to be active, even if it meant only walking around the upstairs of the house at first. When the 90-day quarantine period was up, he returned to the gym for daily fitness walking on a treadmill and weight lifting. He has asthma, and getting back in shape helped him keep it under control. As he grew stronger, he also went for solitary trail rides on a hybrid bike, which helped him think and sleep better.

Daily also exercised his mind to help fend off chemo brain and depression. “Sometimes you can’t really concentrate as well after recovering from something like this, especially if you’re still taking medications,” he says. Sometimes he’d get emotional when he’d see a TV drama that “hit a nerve.” But as an introspective sort and an avid reader, he “was able to accept that it was OK. A lot of people have mental challenges and mental stress. It’s just part of being human. It should not be a stigma.” During this time, video games—Spiderman PS4 and PS5 were favorites—entertained him and kept his mind occupied.

Daily is still immunocompromised—he takes medications that reduce his immune response. He’s been on meds for four years now and will be for at least another three. But he has a genetic trait documented to be associated with a good prognosis. And although he was vaccinated and boosted against COVID-19, Daily, like so many others, came down with the coronavirus when omicron swept through Atlanta early in 2022. Vaccination can be less effective in people with blood cancers (see Basics). Fortunately, it wasn’t even a bad cold, he says, just “a medium cold.” He also received a second booster in April.

When a chance to volunteer for LLS came up in 2019, Daily was enthusiastic. “It gave me an opportunity to appreciate my recovery, help others and give back. It was a very rewarding experience.” During his treatment, he was self-employed, managing his own web development and tech support company. Afterward, his own positive experience with being well insured during cancer treatment led him to consider becoming an insurance agent. He had hoped to spread the word that “when something happens like this and you’re unprepared, it can be catastrophic financially.” But sales was not his passion.

As luck would have it, in 2021, a job opened up at LLS. By then, Daily had become a dedicated volunteer, known for raising his hand for tasks, going to events, traveling a little farther, if necessary. “It takes a bit of humility to put yourself out there,” he says. “But after recovering as well as I did, I didn’t have much of an ego at that point. And what’s the worst case? Somebody will learn about [the disease]. Maybe they’ll identify symptoms in one of their relatives, and they’ll get an early diagnosis.” LLS hired him, and in August 2021, he started working as the national community outreach manager for Myeloma Link (see “The Chess Strategy,” below).

The job has been a blessing. “It was an existential experience going through this cancer and coming out the other end,” he says. “It makes you grateful for being able to get up and not suffering. But it also motivates you to do something meaningful, purposeful. When I was convalescing, I thought, I’m 54 years old. I got cancer. What’s going to be my next step? What does the next stage look like?

“And so you think about what’s the best-case scenario—working from home, maybe getting the opportunity to travel, not having to deal with a lot of corporate drama. And then this [job] kind of falls in my lap. It’s, like, perfect. And more importantly, it’s purposeful. It gives me something to wake up to and look forward to. I don’t want to just take up space.”

By all accounts, that’s the last thing anyone might say about Bryon Daily.

Myeloma Link (lls.org/myeloma-link) is a Leukemia & Lymphoma Society (LLS) initiative that helps connect Black people, who have double the risk of developing multiple myeloma, and caregivers to trusted free information and expert counseling, facilitating access to care and the latest treatments.

Myeloma Link covers 13 cities, including Atlanta, Cleveland, Dallas, Detroit, the Bronx (New York) and Oakland (California), with substantial African-American populations. Bryon Daily’s job is to support outreach managers in each city, developing strategies to educate the Black community about blood cancers. “A lot of people don’t even know what myeloma is—until they get diagnosed,” he says. “It’s often confused with melanoma.” 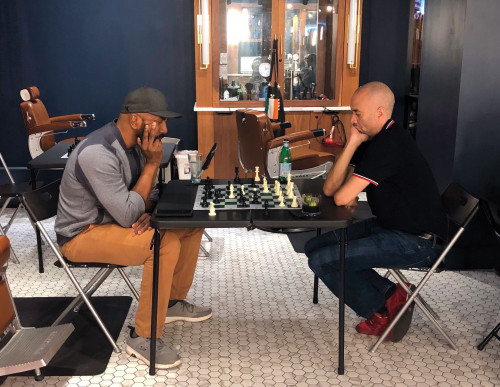 The COVID-19 pandemic proved challenging. Many in-person meetings—at churches, for example—were canceled. LLS members pivoted to virtual forums but were concerned that without person-to-person contact, they might miss the 50-something Black men (it’s more common in men than women) they hoped to reach.

So the team got creative. One idea that Daily is helping to implement focuses on playing chess, a popular game in African-American barbershops, which tend to be trusted gathering places. Plans are in the works to sponsor chess tournaments while spreading the word about health issues of particular concern in the community: blood cancers, but also sickle cell disease, diabetes and prostate cancer.